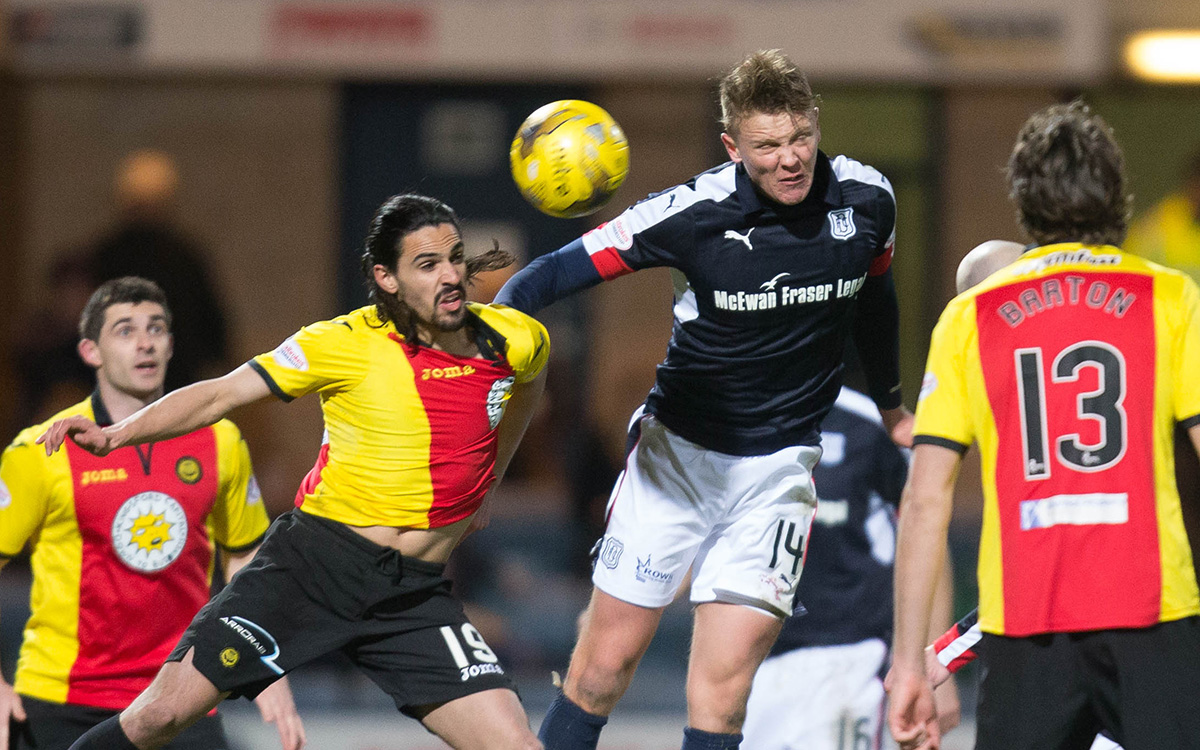 Dundee couldn’t sustain their recent fine form and went down to a 1-0 defeat by Partick Thistle at Dens Park tonight. The visitors had the edge in a poor game, which they won through an unfortunate first half own goal by Julen Etxabeguren. The Basque defender had a miserable night, being stretchered off in the second half. The Dark Blues might have grabbed a point in a late flurry of pressure, but over the full match they could have no complaints about the outcome.

Dundee were unchanged following Saturday’s thrashing of Motherwell, Mark O’Hara having recovered from his ankle knock. Thistle made one change; Christie Elliott came in for Mustapha Dumbuya.

The Dark Blues started promisingly, spending the first five minutes in Thistle’s half. Although Dundee were on the front foot, with some good passing movements, they lacked the fierce intensity that was so prominent on Saturday.

After a cautious opening Thistle started to move forward and gradually started to look the more composed side. Whereas Dundee’s passing had become scrappy Thistle were making fewer mistakes and holding the ball effectively.

Chris Erskine had the first shot of the match after 11 minutes, but failed to connect cleanly from Callum Booth’s pass and scooped the ball into Scott Bain’s gloves from the edge of the penalty area. The closest that Dundee came in the first half was when Mark O’Hara charged down a clearance from Thistle’s keeper Tomas Cerny. Fortunately for the visitors the ball broke to a Thistle player.

Ryan Edwards should have done better when Christie Elliott’s cross found him unmarked 16 yards from goal, but he made a hash of his volley. Dundee’s attacking lacked any real conviction, with the midfield struggling to get the strikers into the match. The Jags were looking more dangerous on the break and they served an ominous warning when Erskine led a fast break that ended with Kris Doolan thrashing his shot well wide from a difficult angle.

Thistle got it right just before the half hour though the goal had an element of controversy. Darren O’Dea was favourite to intercept a ball down the right but Doolan’s challenge from behind landed him on the turf. The Thistle striker then took possession and hit a fierce low cross to the near post where the ball cannoned off Julen Etxabeguren and into the net.

The goal helped Thistle to settle and control the pace of the game. They were holding the ball well and closed Dundee down effectively, forcing repeated errors from the Dark Blues.

The second half started as the first had done, with Dundee pressing forward and for 10 minutess they held out the promise that there would be a sustained fightback. Paul McGowan and James Vincent were finding more space, driving at Thistle’s defence and finally bringing the forward players into the game. However, the mini-revival didn’t last and Dundee managed only one shot during this spell when James Vincent’s low drive from 20 yards was beaten away by Cerny.

Thistle dug in and played their way through that short, tricky spell. They kept their heads, kept working and kept gnawing away at Dundee till the Dark Blues started to lose their momentum. The game become dreadfully scrappy, full of mistakes, but crucially any mistakes that Thistle made were in Dundee’s half. There were was little to entertain the fans, and the messy midfield war of attrition suited Thistle as they looked increasingly comfortable on their lead.

A further worry for the Dark Blues was an injury to Julen Etxabeguren who needed lengthy treatment after a challenge that didn’t look anything out of the ordinary. He was eventually carried off on a stretcher and Kosta Gadzhalov replaced him.

Paul Hartley sent on Faissal El Bakhtaoui and Danny Williams to replace Henrik Ojamaa and Craig Wighton, neither of whom had been involved as much as in recent games. The Dark Blues’ passing continued to let them down, however. It wasn’t sharp or accurate enough. Too often passes put the receiving player under pressure, rather than giving him the chance to move play forward.

After 78 minutes Doolan ran onto Osman’s pass to shoot high into the net, but from an offside position.`That signalled the start of a late charge from the Dee in which they, at last, put Thistle’s defence under serious pressure. El Bakhtaoui saw his shot in a crowded goalmouth bounce off Elliott. Cammy Kerr and Mark O’Hara worked a fast exchange of passes on the right and Kerr’s dangerous cross to the far post was turned out for a corner before Haber could reach the ball. When the corner came over it was cleared as far as McGowan who chipped the ball to the far post where Darren O’Dea headed wide, Dundee’s best and last chance of the match.

There were six minutes of injury time, but it wasn’t enough for Dundee to find a way past Thistle who closed out the match professionally to earn a deserved win. In the last two games the Dark Blues have played thrilling attacking football, but tonight’s performance was flat and well short of the quality this team has shown it can produce.

The defeat ended Dundee’s fine run of form at home. They had been undefeated and taken 17 points from their previous seven matches. The last home defeat had been Thistle last visit to Dens in October. This was Thistle’s third win against the Dee this season and the Jags have shown themselves to be highly adept at stopping Dundee playing the game the way they want to. The Jag’s victory lifts them above Dundee into sixth place, and ensures that the Dark Blues are still closer than they would like to the bottom two spots.

Booked: Barton (foul on McGowan), Erskine (kicking the ball away).