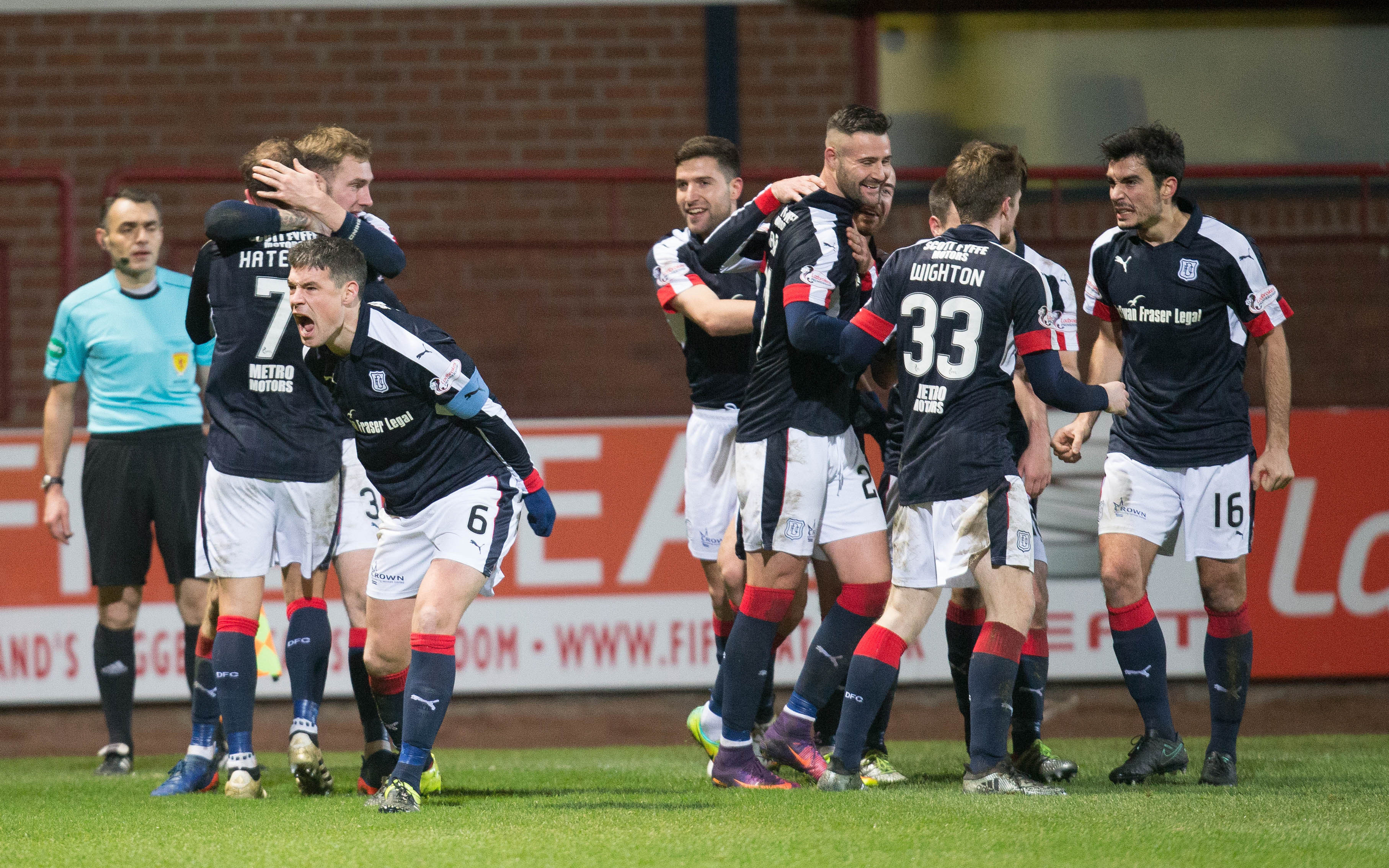 Dundee thrilled the fans by battling their way back from 2-0 down to beat Hearts 3-2 at Dens Park tonight. Hearts took an early lead through a Jamie Walker penalty. When Callum Paterson added a second for the Jam Tarts at the start of the second half the Dee had a mountain to climb. A Darren O’Dea goal started the fightback then Paul McGowan came off the bench to equalise. Three minutes into injury time Marcus Haber headed the winner, sending the delighted fans home with broad grins on their faces.

The Dark Blues only change from the team that narrowly lost to Celtic on Saturday was the return of Mark O’Hara to the starting line-up in the place of Danny Williams, who was named as a substitute. Paul McGowan was available after suspension and took a place on the bench. Hearts also made only one change, replacing midfielder Prince Buaben with Krystian Nowak.

Hearts took an early lead when they won a penalty in their first attack, after three minutes. Bjorn Johnsen played the ball infield along the 18 yard line. Jamie Walker touched it past Kevin Gomis, who caught him late. WALKER took the spot kick and scored, sending Scott Bain the wrong way.

The early stages were difficult for the Dark Blues, who struggled to get the ball off Hearts. The visitors were keeping possession well and spraying the ball around confidently. Krystian Nowak went close with a snapshot from 18 yards. Jamie Walker ran clear onto a John Souttar chip, only for Scott Bain to push his angled drive round the post.

After a tough opening 15 minutes Dundee worked their back into the game without offering any serious threat to Jack Hamilton’s goal. If Hearts looked good coming forward they were less impressive in defence where they took unnecessary chances and were inclined to lose concentration. Nowak dived in on Craig Wighton who slipped clear and cut the ball back for James Vincent to blaze his shot well over. Tom Hateley was no closer when he tried his luck from 30 yards. It was hardly vintage attacking, but at last Dundee were carrying the game to Hearts.

As the first half wound to a conclusion Hearts picked up their game again, looking dangerous every time they attacked. Bain saved well from a Paterson header at a corner. The Dee keeper was then called into action again to keep out Johnsen and Walker. Centre back John Souttar burst forward and his powerful 20 yard shot was turned away for a corner by Bain.

When the half time whistle sounded the Dark Blues were happy to be only a goal in arrears with the hope that the second half might bring an improvement. Julen Etxabeguren came on as a straight replacement for Kevin Gomis at half time. The second half started just as badly for the Dee as the first had done; Hearts extended their lead only three minutes after the restart. Don Cowie’s free kick from the right was met by Callum PATERSON and his header flew inside the far post.

Paul McGowan was sent into the fray, replacing Mark O’Hara, and the battling midfielder was immediately involved. Hearts couldn’t clear a Hateley free kick and McGowan knocked the ball back into the danger area. Marcus Haber headed down for Wighton, whose shot was blocked. Darren O’DEA took the ball, showed neat footwork to make space, and scored with a low shot from 10 yards.

Hearts responded with their best attack of the second half, and Walker shot high and wide after Paterson had dummied over a Johnsen cross. It was the last clear chance that Hearts managed to create. They had plenty of possession and pressure but the Dundee defence was resolute, unlike the Jam Tarts rearguard who always looked fragile under pressure.

There was a lengthy delay while Don Cowie received treatment after colliding with Scott Bain. Eventually he was stretchered off and replaced by Robbie Muirhead. After that Hearts were never again the same force and while Dundee were far from their best they were fighting furiously and always looked capable of unsettling the visitors’ defence.

After 71 minutes the Dark Blues scored the sort of goal that Hearts had been threatening to concede. 30 yards from his own goal Liam Smith lost out to the pressing of Craig Wighton. James Vincent picked up the ball, ran into the penalty area and set up Paul McGOWAN who stabbed the ball past Hamilton from close range.

Hearts didn’t learn their lesson, and Muirhead lost the ball on the half way line to Hateley who ran 40 yards before his shot was blocked for a corner. As other players tired Cammy Kerr seemed to grow stronger, and his powerful runs down the right started to cause Hearts real problems. Kerr ran onto a long pass from Etxabeguren, checked back and flighted over a lovely cross for Wighton, who couldn’t get enough power on his header from six yards out, sending the ball straight at Hamilton.

Three minutes into injury time Cammy Kerr slipped past Liam Smith, who fouled him just outside the penalty area. Tom Hateley whipped in a great free kick for Marcus HABER to smash a match-winning header past Hamilton, a goal that was celebrated as wildly in the stands as on the park.

The injury to Cowie, and other delays, meant that were a remarkable 11 minutes of injury time. Hearts attacked frantically, but with little composure and the Dundee defence kept their heads, defending superbly. The final whistle was met with joy from the home stands, the win being all the sweeter after defeat had seemed inevitable early in the second half. The Hearts fans looked on in horrified disbelief. They will doubtless feel that their team threw away the points tonight, and they would be right. Hearts were impressive going forward in the first half, but in the second half, after they went 2-0 ahead they were casual at the back and in midfield.

Dundee won not because they played pretty football, but because they stuck to their jobs with steely determination and fought their way back from what looked a hopeless position. While Dundee increasingly forced errors from Hearts they made few themselves in the second half, and ruthlessly punished Hearts’ failings. This was a tremendous team performance in which the players rose magnificently to the challenge. It was a cold, wet, miserable night at Dens, but the fighting spirit of the Dundee players warmed the hearts of the supporters. It was a fine Christmas present for the fans! 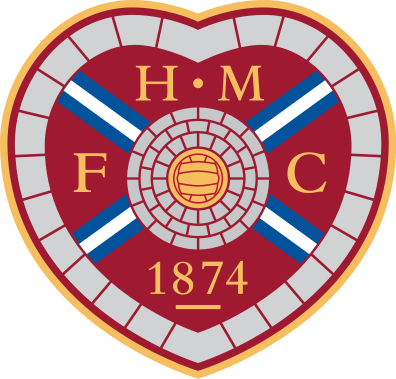