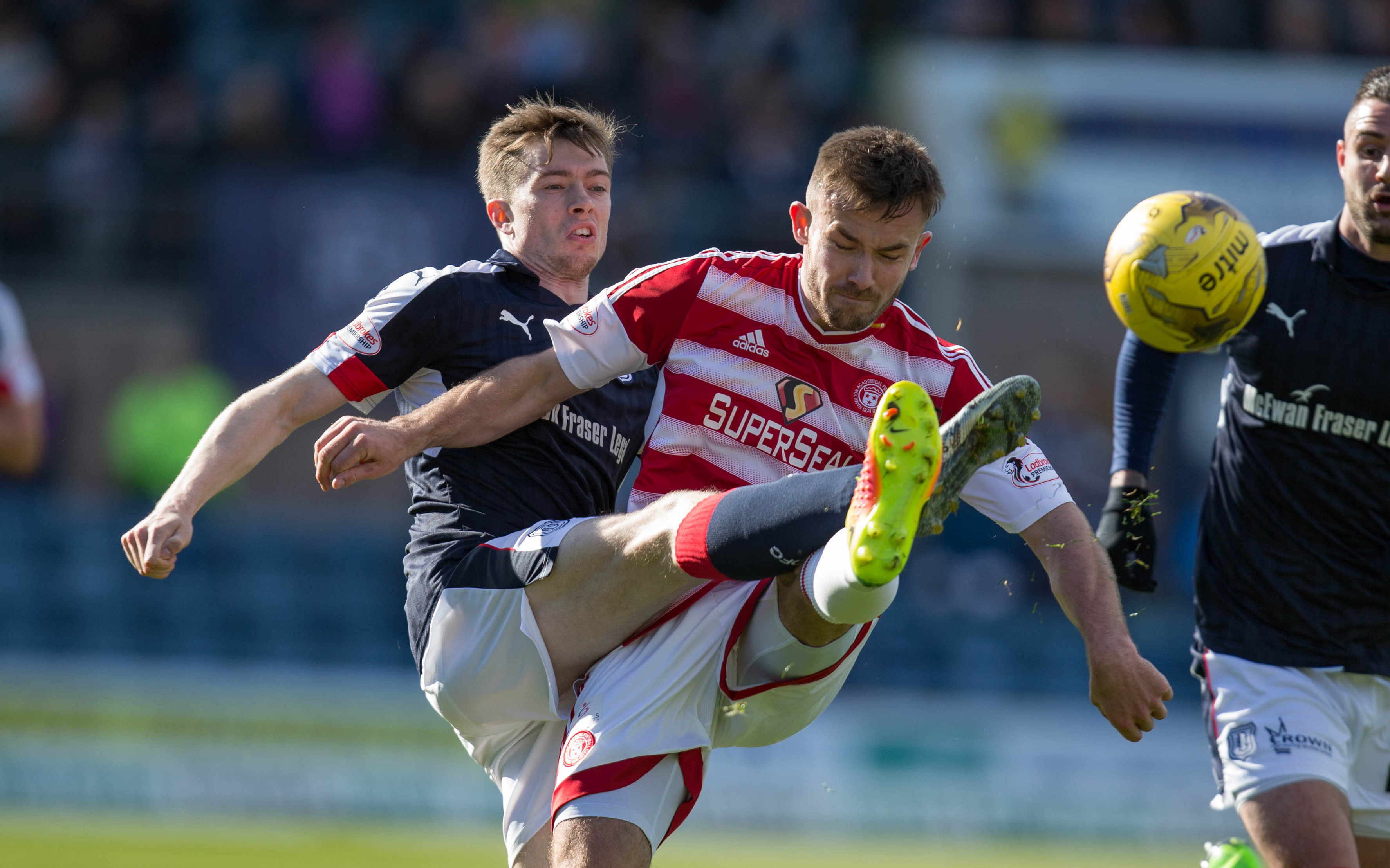 Dundee’s dreadful run of form continued with a 2-0 defeat at home to Hamilton Accies this afternoon. On a day when the first goal was vital Accies took the lead with a penalty by Alex D’Acol midway through the first half. Michael Devlin’s late goal confirmed Hamilton’s win, sending the Dee into the play-off spot.

The Dark Blues made two changes. Faissal El Bakhtaoui and Craig Wighton started, with Henrik Ojamaa and Mark O’Hara moving onto the bench. Accies only change was Darian MacKinnon returning from suspension to replace Ali Crawford, who was suspended today.

Dundee started off promisingly, playing up the slope towards the Bobby Cox Stand. Faissal El Bakhtaoui sent Marcus Haber clear on the right, but the return cross was too far head of the French striker. Moments later Haber was again free on the right courtesy of a mistake by Accies’ defender Scott McMann. This time Haber took a quick shot, but Remi Matthews touched the ball out for a corner.

Accies were playing some neat possession football rather than heading for goal as quickly as Dundee. A patient build up ended with Scott Bain saving well from Rakish Bingham’s low drive. Dundee went close again when Marcus Haber, diving full length only five yards from goal, couldn’t quite reach Tom Hateley’s inviting cross swinging in from the right.

Neither side were prepared to sit back, both desperate to settle nerves with the opening goal. Greg Docherty’s swerving shot from 30 yards was punched away by Scott Bain. The ball flew straight at Dougie Imrie, but too fast for him to control his shot, which flew well wide.

Midway through the first half Accies scored the crucially important first goal. Tom Hateley was on the point of clearing a long ball into the Dee’s penalty area when Imrie sneaked in on his blind side. Hatelely’s attempted clearance caught more of the man than the ball and Mr Beaton pointed to the spot. Alex D’ACOL scored with a powerful low shot.

Losing the opening goal had a predictably depressing effect on the confidence of the Dundee players. Their play was hurried and nervous. No-one could find the calmness or composure required to hold the ball and dictate play. Too often the ball went forward quickly and harmlessly, straight to the Hamilton defence.

Although the Dark Blues were struggling to put their game together they twice came close to scoring before the break. A short low corner from Hateley found Craig Wighton, who wriggled into space before shooting past Matthews, but Greg Docherty scooped the ball off the line. Matthews then pulled off a great save to touch away El Bakhtaoui’s header from Paul McGowan’s long cross.

Dundee took a long time to get started in the second half. Eventually the Dee started to put Accies under pressure. Kevin Holt’s scuffed shot from a corner lacked the pace to evade the covering defenders and was cleared off the line by McMann. Matthews then saved well from El Bakhtaoui’s low shot from the edge of the penalty area. These two incidents came in quick succession, and sadly there was little further threat from the Dark Blues in the remaining half hour.

There were flashes of promise and the odd hint of danger from the Dark Blues, but the home players could never find the right final pass or cross. Hamilton defended resolutely and effectively, always managing to get a boot or head in the way when they had to.

Mark O’Hara came on for James Vincent, and then Henrik Ojamaa replaced Cammy Kerr, who had taken a couple of heavy knocks. The right footed Kerr was far less effective at left wing back than he has been on the right where he can cross comfortably on the run. Dundee struggled to get players into positions from which they could hit dangerous crosses, and when they did manage it the crosses weren’t good enough to worry Accies.

The longer the game wore on the more open Dundee became and the more comfortable Hamilton looked. The Dee were vulnerable to fast breaks by Hamilton, and little more secure under pressure. The killer second goal came after 83 minutes when Redmond’s corner found Michael DEVLIN running in unmarked at the far post to score with a simple header.

That settled the outcome, and in injury time the only close thing came at Dundee’s end when Imrie’s shot struck Daniel Higgins and spun wide.

Hamilton have been deep in the relegation battle for months, but their recent good run has lifted them above Dundee into 9th place. Accies were clearly the more confident side today. Once they were in the lead they were sufficiently focussed and organised to play the game their way and they saw out the match with an lack of trouble that was deeply frustrating for the home support.

While Dundee are stuck in this slump they can ill afford to lose the first goal. It happened again today and it proved crucial.