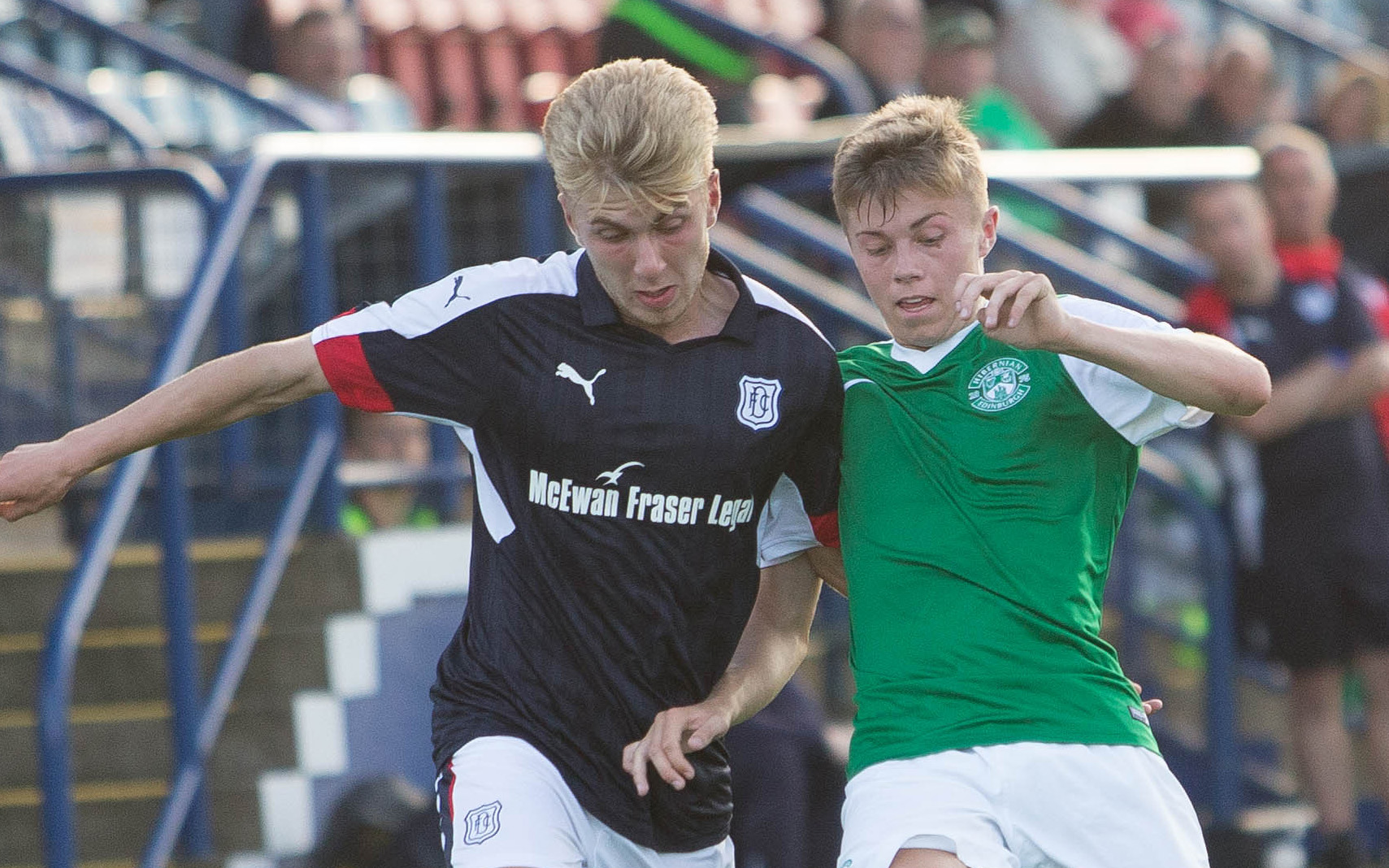 Nicky Low’s late goal salvaged a point for the U20’s against Hibs, earning them their second 2-2 draw in as many games.

Calum Ferrie, Jesse Curran and Kyle Clark were all brought into the Dundee starting 11, replacing David Mitchell, the Trialist and Taylor Berry who dropped to the bench. Matty Allan also had a place on the bench, replacing Liam Gibb, who joined Carnoustie Panmure on loan earlier in the week, but there was no place for new signing Ian Smith, who signed from Hearts earlier in the day.

After a lacklustre opening 20 minutes, Connor Coupe, who was deployed behind Mark Smith, opened the scoring with a super chip over Ross Laidlaw. The Dees continued to dominate, but found themselves trailing as the game entered its closing stages. Nicky Low got on the end of Jesse Curran’s pass and slotted past Laidlaw, to rescue a point for the hosts.

The Dees nearly doubled their advantage six minutes later. Coupe’s cross was diverted towards goal by Mark Smith. Kyle Clark got on the end of the ball but sent his effort over the bar and out of the ground. Hibs were unable to cope with the high intensity pressing from the Dees.

Dundee had ended the first half on top, and started the second in similar fashion. Mark Smith won the ball in the Hibs half, but his left footed effort didn’t trouble Laidlaw. The former Raith Rovers man was called into action moments later, this time the Hibs keeper was forced to tip away Jesse Curran’s effort from a corner.

Dundee were continuing to put Hibs under pressure but the visitors were next to threaten. Fraser Murray got on the end of a flick on but his effort didn’t trouble Ferrie. Dundee’s efforts in the first half appeared to be taking their toll physically and with 58 minutes played, the match burst into life.

Nicky Low’s corner fell to Curran, who volleyed the ball across the face of goal. The ball struck Mark Smith, but the striker couldn’t turn the ball into the net. From this Hibs would find themselves level, with a goal that was a near carbon copy of the opener.

Olly SHAW chased the long ball and managed to lift the ball over Ferrie. The ball rolled towards the goal before clipping the inside of the post and rolling over the line. The goal was certainly against the run of play, but Hibs now sensed the game was there for the taking.

Dundee were not to be deterred by the goal and continued to press. Sam Dryden’s cross was met by Colquhoun, but the midfielder’s header was well saved by Laidlaw. A few inches left or right and the goalkeeper would have been beaten. Hibs were beginning to grow into the game, pressing and forcing mistakes the way that Dundee had done in the first half and with 70 minutes played took the lead.

Fraser Murray’s shot was parried by Ferrie into the path of Josh CAMPBELL, who tapped the ball into the empty net. Things nearly got worse for the Dees, as Jamie Gullan’s sent his effort just over the bar. Dundee were now searching for an equaliser, both Coupe did well to cut inside from the left but his shot was off target. Jesse Curran managed to get to the by-line but the midfielder opted to shoot rather than try and find a teammate.

With 10 minutes remaining, Taylor Berry replaced Calvin Colquhoun. It didn’t take long for Berry to make a difference, the midfielder’s cross to the back post was cleared by Kane O’Conner, the defender doing well not to turn the ball into his own net. The resulting corner fell to Curran, who’s shot was blocked by the oncoming Hibs defenders. The Dundee players and bench were adamant the ball stuck a hand, but the referee waved away the appeals.

This proved not to matter, as seconds later, the Dees were level. Curran sliding the ball through to Nicky LOW, who sent his (pun not intended) low shot past Laidlaw, after 84 minutes. Hibs almost won the match at the death, Ryan Porteous had the freedom of the penalty area following an in-swinging free kick, but couldn’t keep his header on target.

Despite the same result as the Aberdeen match, this was a far improved performance from Dundee. They dominated Hibs for long spells in the match and should have had the game wrapped up before the Edinburgh side were level. Hibs did well to get back into the match, and were far improved in the second half. For Dundee, Connor Coupe was excellent again, while Sam Dryden continues to impress at right back. Matthew Smyth and Kerr Waddell will continue to improve as they get more game time together. As it stands, the signs are there that the wins will come, and next week’s match against Dundee United is as good a game as any to start.