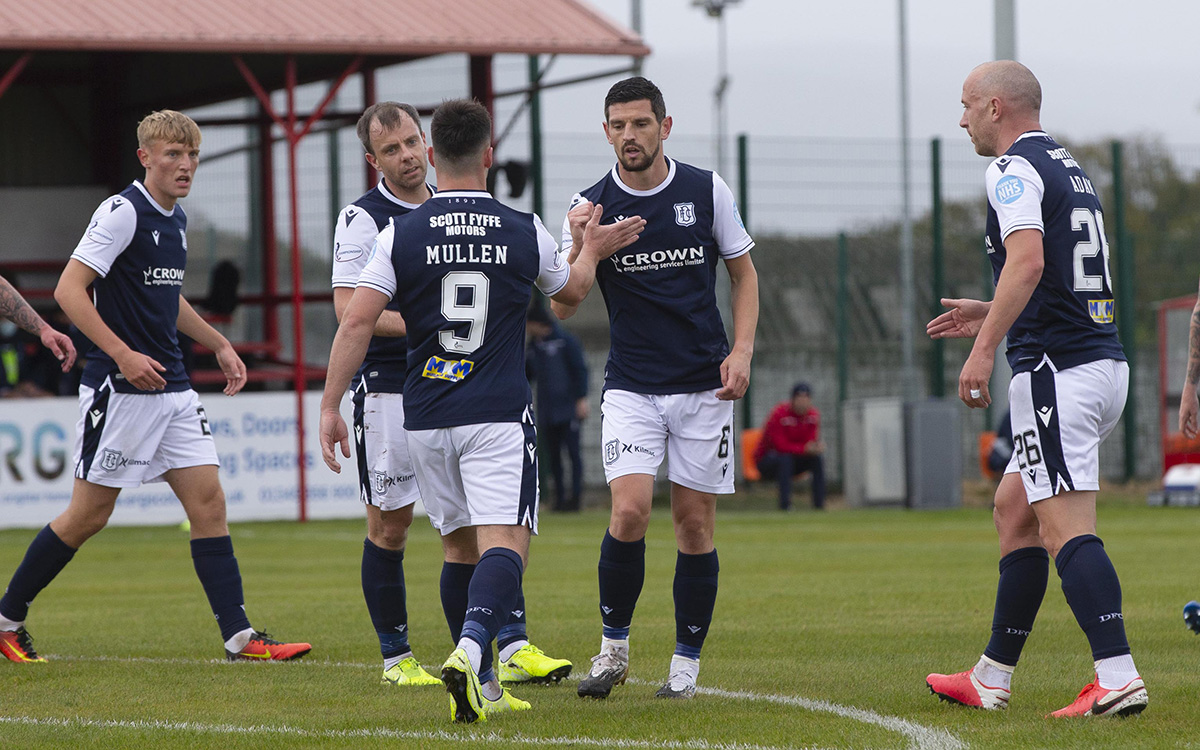 Dundee beat Brora Rangers 2-0 in this afternoon’s Betfred Cup tie at Dudgeon Park, the Dark Blues’ first competitive match for seven months. Goals from Graham Dorrans and Danny Mullen in the first half hour gave the Dee victory. The Highland League champions were tough opponents who will be disappointed that they didn’t get on the scoresheet but Dundee’s extra quality allowed them to three hard fought points.

Brora were fast out of the traps and eager to get amongst the Dee defenders. After three minutes a stray pass from Graham Dorrans as he came out of defence went straight to Greg Morrison. He sent the overlapping left back Ally MacDonald to the byline and the Dee were happy to escape with a corner.

As Dundee grew into the game they looked increasingly dangerous and soon took the lead. Charlie Adam played a fine pass out to the left for Jordan Marshall to cross. Danny Mullen turned the ball back to DORRANS, whose shot from 12 yards flicked off Colin Williamson to leave the diving Joe Malin helpless as the ball looped into the net.

Malin did well to touch Adam’s 25 yard free kick round the post as Dundee threatened to add to their lead. Jack Hamilton was having an quieter time in the Dee goal. In the first half hour his only real save was when he smothered Dale Gillespie’s free kick from 30 yards.

Midway through the first half Dundee extended their lead. Adam sent Christie Elliott away down the right. The wing back found Max Anderson in the penalty area and the youngster twisted one way and another before sending a low cross to the near post for Danny MULLEN to hook home his first goal for the club.

Despite the two goal lead the Dark Blues were certainly not having everything their own way. In possession Brora were confident and aggressive, taking the game to Dundee. However, Dundee’s passing and movement in attack gave them a decisive edge.

Dundee could have gone further ahead when Paul McGowan sent Mullen clear, but Malin pulled off a fine save. The home keeper then had to beat away a ferocious cross shot by Jordan Marshall.

It looked as if the Dark Blues might run away with the game, but Brora hauled themselves back into contention in the later stages of the first half. Jack Hamilton had to save a 20 yard shot at full stretch from Greg Morrison. Only a minute later Hamilton saved superbly from the same player, turning the ball over the bar after Andy MacRae had sent Morrison clear.

Dundee started the second half camped firmly in Brora’s half, pushing hard for a killer third goal. Malin again saved well from an Adam free kick. The Dark Blues had a succession of corners as the home side struggled to get out of their own penalty area.

When Brora did eventually break clear they very nearly scored in each of their first two attacks of the second half. Hamilton did well to turn Martin Maclean’s 25 yard drive round the post. Tom Kelly went close when Jordan MacRae turned a cross into his path, and the 12 yard shot was deflected just past the post.

From the resulting corner Dundee broke at speed, with McGowan and Anderson being faced by a single defender. McGowan played the teenager in, but Malin made a fine save. Dundee retrieved the ball to keep the attack going and McGowan turned neatly in the penalty area before shooting wide. Osman Sow replaced Danny Mullen. He immediately combined with Dorrans in a lovely move before sending a volley narrowly past the post.

Malin was in fine form in the home goal and pulled off another good save. With everyone expecting a cross Dorrans went for goal with a free kick wide on the left but the Brora goalie reacted well to turn the shot over the bar.

Finlay Robertson replaced Max Anderson, who had been booked, after an hour. Late on Cammy Kerr, Shaun Byrne, and Declan McDaid came on for Christie Elliott, Charlie Adam and Paul McGowan.

The last 20 minutes were open, often frantic, but Fin Robertson was the only player to test one of the goalkeepers again. After winning the ball he advanced to try a low 20 yard shot that was heading inside the post till Malin stretched to save. Brora kept working and running hard right to the end, but none of their late attacks created a clear chance. The Dark Blues held out to take a deserved win against difficult opponents, and earn their sixth successive competitive clean sheet.

If Brora had scored at any point of the game today it would hardly have been an injustice, and it would certainly have made things very interesting. Even with a two goal lead Dundee were fully in control only for the middle of the first half and at the beginning of the second. The Dee were comfortable in possession, but when Brora had the ball the home side posed problems, and it was something of a surprise that the game produced no more goals in the second half.

There were plenty of positive signs today. The midfield played attractive football, with some excellent passing. Dundee used the wide areas well and created chances repeatedly in the first hour. Perhaps the Dark Blues gave the ball away unnecessarily a few times, and they should possibly have made the game safe in spells when they were well on top. However, this was a solid start to the season with the Dark Blues leading their group on goal difference ahead of Hibs. 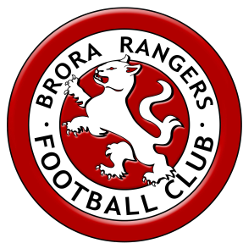