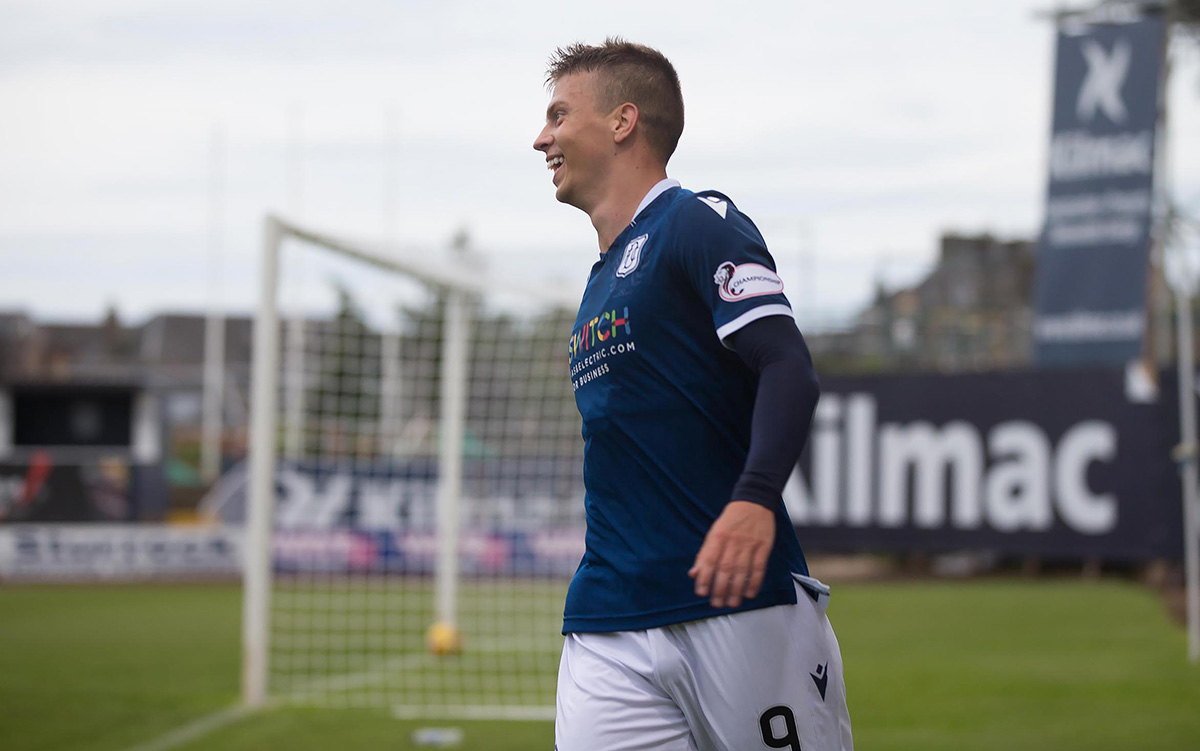 Dundee’s only home pre-season friendly brought a 1-0 win over English League One club Blackpool FC. Andrew Nelson’s opportunist goal late in the first half was decisive as the Dark Blue defence had to work hard for their clean sheet against sustained pressure from the Seasiders, especially after the break.

The Dee started with an experienced team, playing with three at the back, and gradually introduced the youngsters in the second half. Blackpool played two completely different outfield teams in each half, mixing up the established first team players in the two line ups.

After early Dee pressure Blackpool played their way into the game and started to threaten the home goal. Armand Gnanduiller missed by inches when he spun on a bouncing ball in the goalmouth and hooked his shot wide.

Dundee responded with a spell of good pressure, featuring some pleasing passing from the new midfield, but without creating real chances. Blackpool again went close when Jack Hamilton had to push a fierce cross from Nathan Delfouneso over the bar. Curtis Tilt powered a header wide from the corner.

The Seasiders were on top and threatened repeatedly down the Dee left. Hamilton had to dive at the feet of Sullay Kaikai and Gnanduiller following a dangerous cross from Liam Feeney. Hamilton then saved well from Kaikai’s curling 18 yard shot.

The Dark Blues weathered that storm and started to look more dangerous in attack. Andrew Nelson had shown great persistence closing down the Blackpool defenders and his hard work paid off five minutes before the break.

Keeper Chris Mafoumbi took a fraction of a second too long dealing with a backpass. The turbo charged NELSON arrived at high speed and blocked the attempted clearance, sending the ball straight into the back of the net.

Blackpool tried to get back on level terms before the interval and Kaikai again brought the best out of Hamilton with another shot from the edge of the penalty area.

The Seasiders replaced all 10 outfield players at half time and took charge of the game. Dundee struggled to get forward, but were generally comfortable in defence.

Blackpool had long spells of pressure, but failed to get dangerous balls into the box. Yusifu Ceesay’s pace opened Dundee on the right briefly, but he was crowded out when he cut inside. Matty Virtue should have scored when he shot carelessly over the bar from close range. Apart from that Blackpool’s attacks fell apart repeatedly in the final third, with Jack Hamilton not being given any serious problems. The few shots that came his way required simple saves.

Dundee looked more solid at the back when they switched to a back four after an hour, with specialist full backs Cammy Kerr and Jordan Marshall on the park.

After being pinned back for most of the second half Dundee emerged from their shell in the last 10 minutes and should have extended their lead.

As the Dee poured forward, with a pack of youngsters on the field, Lyall Cameron had a close range shot blocked and Jordan Marshall’s low drive up through a crowd of legs was well saved by substitute keeper Myles Boney.

Cameron and Josh Mulligan made a fine quick break out of defence, and Mulligan showed remarkable strength for a 16 year old to hold off some strong challenges before he was eventually fouled 20 yards from goal.

Right at the end Mulligan and Cameron set up Michael Cunningham to shoot from an angle. The shot was blocked and Mulligan’s follow up seemed to strike an arm, but the referee waved aside the Dundee appeals.

This was certainly a tough and competitive match against a high standard of opposition. The Dark Blues had to keep their concentration and work hard to hold off Blackpool, who will surely feel they should have done better with all their possession. However, it was Dundee who managed to take one of the few chances that came their way and the exciting late charge from the Dark Blue kids meant it was the home fans who were sorrier to hear the final whistle.