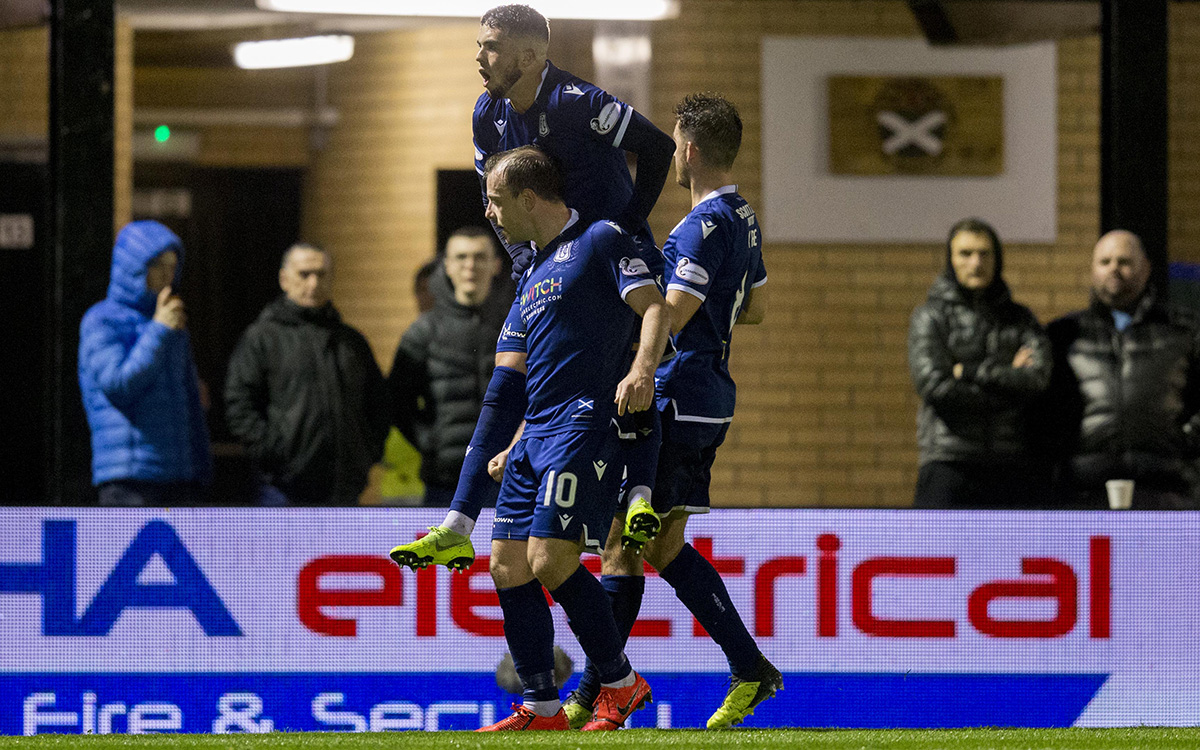 The Dark Blues battled their way to a morale boosting 2-1 win at Somerset Park in Ayr tonight. Declan McDaid and Paul McGowan put the Dee two up before Luke McCowan pulled a goal back in a frantic first half. The game settled down after the interval and Dundee saw the game out safely for their first away league win of the season.

Dundee made three changes from last week. Conor Hazard made his debut in goal, replacing Jack Hamilton. Cammy Kerr and Andrew Nelson came in for Josh Meekings and Sean Mackie. Ayr’s only change was new manager Mark Kerr dropping out in favour of Jordan Houston.

The clever forward play of Michael Moffat was always a problem and, after finding space too easily, he brought a good early save from Conor Hazard. Both keepers had to save well from powerful angled drives. First Ross Doohan beat away Andrew Nelson’s effort and then Hazard did the same with Allan Forrest’s shot.

Ayr were punished by Dundee’s hard working pressing when the Dark Blues took a 16th minute lead. The defence lost the ball playing out from the back. Declan McDAID swapped passes with Nelson before crashing a low drive into the corner of the net from 25 yards.

Ayr United were far more impressive in attack than defence and only desperate last ditch defending prevented an equaliser. Moffat broke clear, but Hazard managed to block his shot. Moffat picked up the loose ball and teed up Forrest only for Cammy Kerr somehow to turn the ball around the post.

It was the sort of game that was always going to produce more goals, but it was anyone’s guess at which end they’d come.

Just after the half hour the Dark Blues extended their lead in a remarkable 60 seconds for Paul McGowan. He was fouled 35 yards from goal and booked for his angry response. Graham Dorrans free kick found Jordon Forster charging in to volley but Doohan made a great save with his feet. McGOWAN’s reactions were sharpest and he smashed the ball home from 14 yards. His celebrations in front of the home supporters tested Mr Madden’s patience, but happily a warning sufficed.

The Dee had always looked dangerous but a two goal lead flattered them against an Ayr side who were constantly creative in open play. However, it was from a set piece that they pulled a goal back after 38 minutes. A free kick from 35 yards out was swept beyond the far post where Aaron Muirhead headed back across goal for Luke McCOWAN to score with a diving header that Hazard couldn’t quite keep out with his legs.

The final opening of a hectic first half came when the Dee worked a neat throw and Shaun Byrne blasted Kane Hemmings lay off over the bar from 20 yards.

The second half lacked the goalmouth incident we saw before the interval, but neither side eased up on the effort or the bruising tackling. Dundee managed to calm the game down, showing the greater composure in midfield. The two abberations came from slips by Dorrans and Byrne, who each lost possession. Both times Ayr failed to take advantage. McCowan shot weakly wide from an awkward angle the first time and Forrest whipped a 20 yard shot just past the post after the second Dee mistake

That was with 30 minutes to go and it was Ayr’s last truly dangerous effort of the game. The home side were often able to reach Dundee’s penalty area, but they lacked the clever approach play they showed in the first half and the Dark Blue defence coped with everything thrown at them.

Dundee threatened to add another goal in the opening 20 minutes of the second half, when McDaid, Nelson and Hemmings all looked dangerous. The longer the half wore on the more that the Dee concentrated on securing the midfield and defence, taking no unnecessary chances. Conor Hazard dealt well with everything that came his way, but he was really tested only by a blistering Forrest shot from an improbable angle that he clutched confidently rather than simply beating away.

After last week the final 15 minutes dragged on interminably, but there was no hint of a collapse tonight. This was exactly the response we all wanted to the Partick disappointment. There was some good football at times, but what won the game was hard work, teamwork and concentration. Ayr’s defence was vulnerable to Dundee’s furious pressing in the first half and that allowed the Dee to take a lead that they never surrendered.

It was a hard match in every sense. Ayr are extremely difficult opponents who will hurt teams with good and clever football. But neither side held back from the physical side of the game and Dundee stood their ground when the going got tough, sometimes painfully tough. Declan McDaid will certainly have enjoyed his return to Somerset Park, but the Ayr defence did their old teammate no favours with their tackling.

There are no easy grounds to pick up points in the Championship, and Somerset Park is one of the toughest. A win there is a tremendous result for the Dee and it is vital that they build on this in the weeks to come.