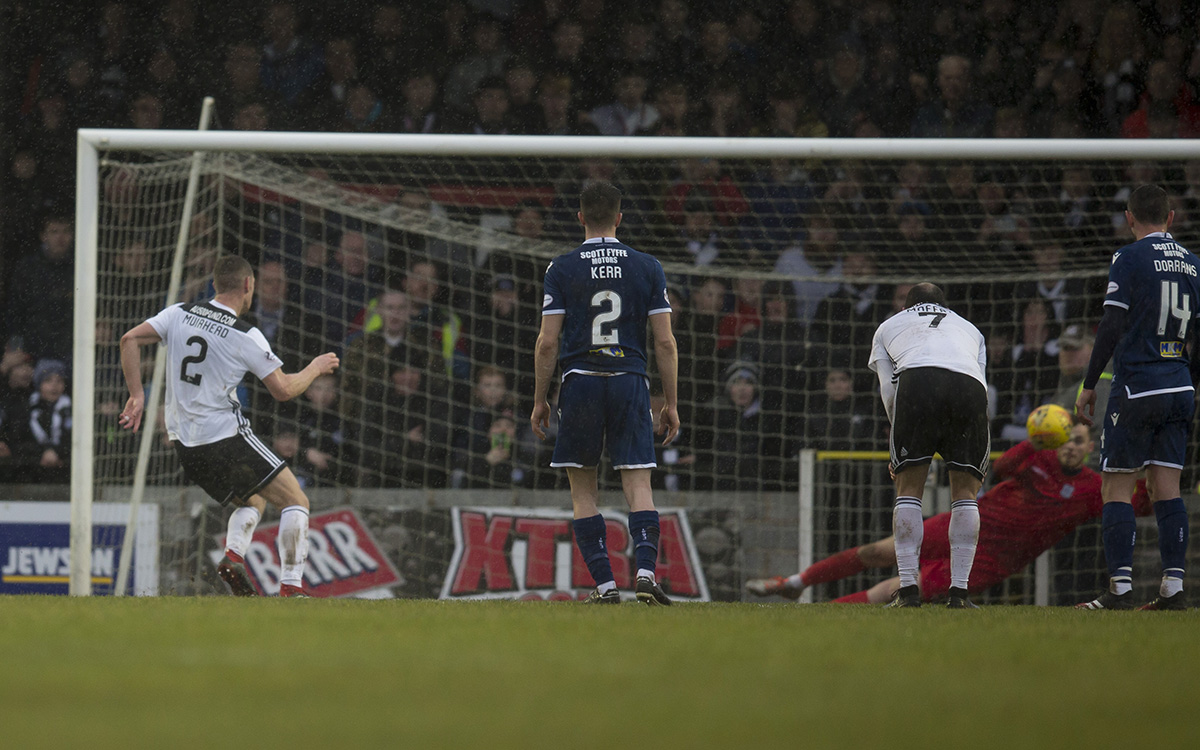 Dundee emerged from the first match of the double header against Ayr United with a goalless draw at Somerset Park. Chances were hard to come by in the soggy conditions and the Dark Blues needed a fantastic save by Conor Hazard from Aaron Muirhead’s second half penalty to take a point with their fourth consecutive clean sheet.

There were two changes to the Dark Blues’ starting 11. Kane Hemmings and Cammy Kerr returned with Andrew Nelson and Christie Elliott moving onto the bench. Ayr also made two changes. Michael Moffat and Connor Malley came in for Mark Kerr and Luke McCowan.

Dundee were the first team to threaten when Cammy Kerr made a good run down the right and swung over a dangerous low cross that home keeper Ross Doohan pawed away to safety. Ayr’s first attempt followed some careless defending in their own penalty area. The ball was eventually hammered into the far distance down the left. Aaron Drinan chased after it and his low cross was flicked inches past the post by Alan Forrest.

The first half hour was an open and entertaining affair with both teams looking capable of scoring. The Dark Blues had a slight edge, thanks to greater composure in the final third. Dundee regularly passed their way into good positions around the penalty area, whereas Ayr constantly conceded possession when they approached the Dundee goal.

Ayr had a sniff of a half chance when a deep cross found Michael Moffat well beyond the far post but he sent his header straight at Conor Hazard. Dundee’s best effort came from a neat passing move on the left. Josh Meekings found Jordan McGhee who cut inside and his curling shot was deflected, shaving the outside of the far post.

Dundee had a succession of corners and long throws, hurled into the goalmouth by Josh Meekings. The home defending wasn’t always tidy but they coped scrappily with all the set pieces.

As the rain started to stream down onto a difficult, bumpy pitch the game lost its zip and very little happened in the last 15 minutes of the first half. Increasingly it looked like a goal would come from a mistake rather than a flash of skill.

At half time Andrew Nelson replaced Jordan McGhee, who had taken a heavy knock and required lengthy treatment. The downpour continued after the interval and there was little more in the way of fine football on a wet and bumpy pitch.

Ayr’s Michael Moffat managed to get the ball into the net, but from an offside position. The home side continued to waste possession with poor passes and crosses in the Dee half, but one of these led to a penalty for Ayr.

Drinan made a hash of a crossfield pass that dropped into the penalty area with no-one nearby. Cammy Kerr was about to clear but Hazard called to leave it. The keeper hesitated and Moffat nipped on the blind see of Kerr who reacted too late and tripped the forward for an obvious penalty. The home players pleaded with referee Mr Moffat to send Kerr off, with little justification and even less sportsmanship. Aaron Muirhead struck the spot kick well and it took a magnificent full length save by Hazard to turn the ball round the post and make amends for his part in the earlier chaos.

With half an hour to go that was the last serious threat to either goal. The Dark Blues showed more control and composure in the final third without ever finding the right final ball to open up Ayr. With less possession the home side were more eager coming forward, but they kept giving the ball away.

Having been booked in the first half Cammy Kerr was withdrawn and replaced by Christie Elliott as a precaution. For the last 20 minutes Tom Field came on for his debut, taking Declan McDaid’s place as a more orthodox wing back.

The end of the match was messy rather than frantic as both sides tried unsuccessfully to dig out a winner. Ayr had great trouble unsettling the steady Dee defence in open play. They came closest with a blistering 25 yard shot by substitute Grant Gillespie, but it was too close to Hazard who nevertheless did well to parry and recover the ball. The Dee’s best effort was a low 20 yarder by Kane Hemmings that flew past the post after a lengthy passing move around Ayr’s penalty area.

The home side continued to defend set pieces erratically, regularly failing to clear cleanly and relying on scrambling loose balls away from danger. The Dark Blues couldn’t take advantage of some dodgy defending, but always looked more capable at the back when Ayr attacked.

At the end a point was a fair outcome in difficult conditions. The Dark Blues had an edge in open play, but couldn’t turn that into sufficient goal threat, and needed Hazard’s penalty heroics to take a point. So both teams will face each other at Dens on Tuesday. On this evidence another goalless draw looks unlikely. Surely someone will somehow find a way to score.