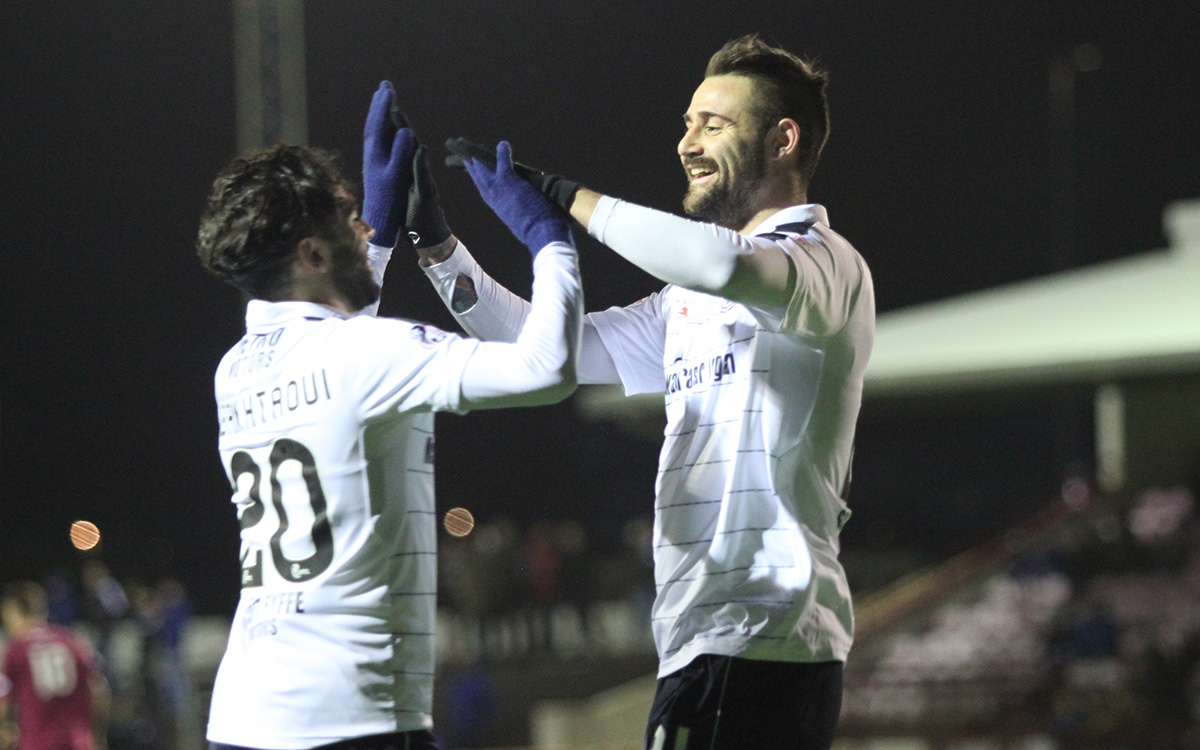 Dundee overcame a battling Arbroath side in the friendly at Gayfield tonight, winning 2-0 through second half goals from Marcus Haber and Craig Wighton. The Dark Blues had the edge throughout, fielding almost completely different teams in each half, but made their superiority tell after the break.

The Dark Blues’s first half team dominated possession and spent most of the first 45 minutes camped out in Arbroath’s half, but they repeatedly failed to find the right final ball. Lengthy passing moves around the Lichtie’s penalty area eventually broke down with a misplaced pass.

Yordi Teijsse caused Arbroath problems early on with his strength and persistence. After five minutes he broke free down the left but sent his angled drive across goal and wide. Danny Williams gave Ricky Gomez a fright with an 18 yard shot that the keeper nearly spilled into his own net.

Gomez then saved much more impressively from Williams’ next effort after Teijsse’s run had opened up the home defence. Williams took over the ball, cut inside the last defender and seemed sure to score, but Gomez saved with his foot.

Michael Duffy went close with a 25 yard shot that flashed just over the bar, but Dundee were struggling to play their way into the Arbroath penalty area in spite of dominating possession.

Arbroath were largely restricted to attacking on the break in the first half. They managed a few neat moves, with young Josh Skelly, their loan signing from the Dee, looking lively on the right wing. The Lichties managed some neat build up play, but their attacks usually ended with optimistic long range shots or crosses that might have been dangerous if a home player had been able to get on the end of them.

Only Cammy Kerr and Danny Williams stayed on the park for the start of the second half, and Williams changed position to left back. A particularly welcome sight was the return of Nicky Low to action with the first team.

The second half team quickly took the game to Arbroath and looked sharp from the start. Six minutes after the break Faissal El Bakhtaoui picked up the ball 20 yards from goal. He peeled out wide to the right, ran around the outside of the defence and dinked a lovely cross to the far post where Marcus HABER headed the opener.

Craig Wighton almost added a quickfire second following a skillful run down the left, but his shot was blocked and he was then crowded out when he picked up the rebound.

Jesse Curran then came on for Danny Williams and played right back with Cammy Kerr moving to the left.

El Bakhatoui almost claimed another assist with beautiful skill to make space and release Wighton, who raced in on goal and stabbed a shot against the post with the outside of his right foot. El Bakhatoui was entertaining the crowd with his skill and had a dangerous shot from 25 yards that Gomez took well.

There was the odd moment of carelessness from the Dark Blues, giving the ball away cheaply, but Arbroath couldn’t take advantage. Dundee remained in control and deservedly claimed their second goal after 84 minutes. Tom Hateley took a quick throw, deep inside the Dee half, releasing Haber down the left. The Canadian striker had time to play a perfect pass across goal for Craig WIGHTON to score at the far post.

Jesse Curran nearly scored a third after pulling down a long pass and hammering a ferocious shot from 25 yards that Gomez did well to push away for a corner. That was the end of action and the Dark Blues had to be satisfied with a 2-0 win against feisty opponents on a cold and windy night.