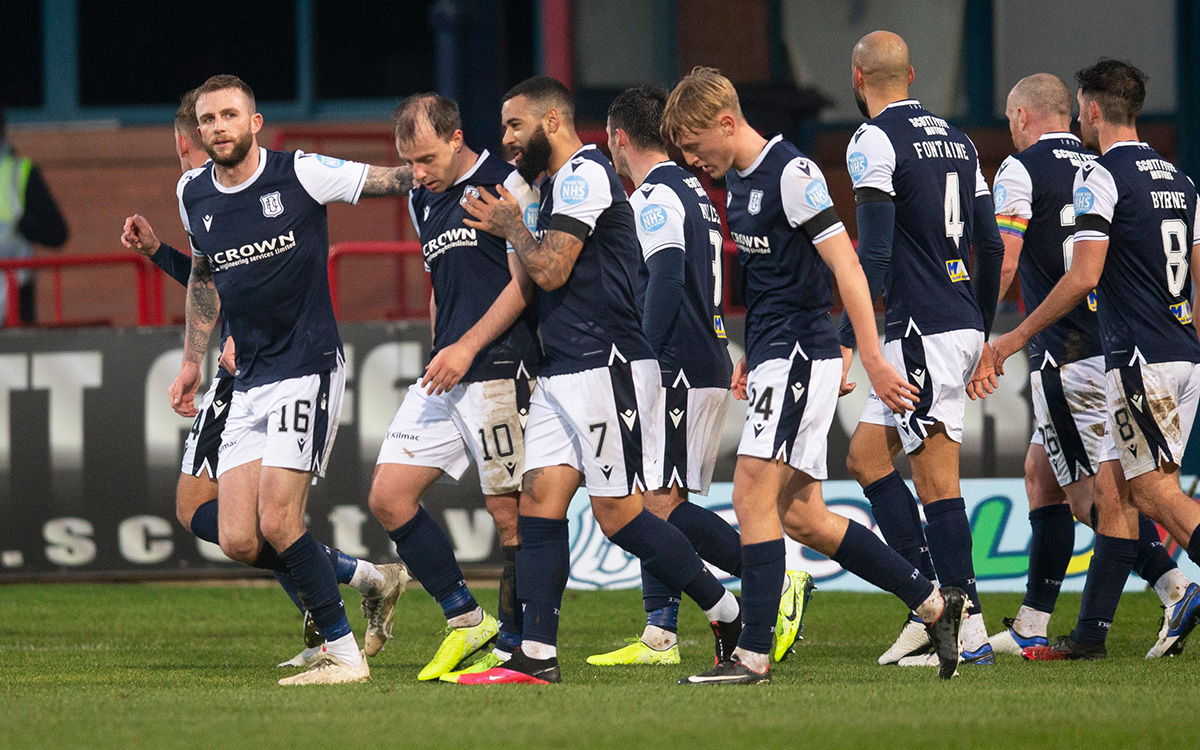 Dundee picked up an important three points from a 1-0 win over Arbroath at the Kilmac Stadium. Paul McGowan scored the only goal late in the first half with a marvellous run and shot. The Dee should have sealed the win in the first half and had to withstand a fightback by the Lichties after half time before holding on to take all the points.

Neither keeper had much to worry about in a quiet opening in which a slippy pitch was causing problems. However, once the real action started both goalies had to be at their best. Derek Gaston was first to be called into action and did well to turn Jordan Marshall’s ferocious drive out for a corner.

Ex-Dee Bobby Linn showed that at the age of 35 he still has a turn of speed and skill as he raced to the byline before driving a wicked low ball across goal with no Lichties able to reach it. Arbroath followed up with an even more dangerous attack when Michael Ruth’s run in from the right opened up the Dee defence. Only a great save by Jack Hamilton stopped the youngster on loan from Aberdeen opening the scoring.

The remaining 30 minutes of the first half consisted of Dundee battering the Arbroath defence and being foiled by two superb saves by Gaston.

Paul McGowan played a lovely pass over the heads of the Arbroath defence for Christie Elliott to run in and take a first time shot on the volley. Gaston saved instinctively from close range. Dundee kept pushing for a goal, playing some clever football around the Lichties’ penalty area. Alex Jakubiak sent Marshall to the byline with a deft backheel. The full back’s cross found McGowan, who teed up Max Anderson to shoot from 12 yards, but Gaston somehow managed to turn the ball round the post.

After 34 minutes Dundee finally scored the goal they deserved. McGowan and Jakubiak had been creating problems for Arbroath by dropping back into space to take the ball and start attacks. McGOWAN dropped deep again, turned and ran at the retreating defence before guiding a beautiful shot with the outside of his boot from 18 yards off the inside of the post and into the net.

McGowan might have had a quick second goal a couple of minutes later when a frantic Dee attack ended with his shot striking O’Brien’s arm and sailing out for a corner. In the last minute of the first half Dundee played their best move of the match, with a quick exchange of passes by McGowan and Jakubiak to set up Shaun Byrne, who shot wide.

The Dark Blues started the second half with the same aggressive tempo and the Arbroath defence was struggling to keep them at bay. Jakubiak had a goalbound shot blocked, possibly by an arm sending the ball out for a corner. A cross by Christie Elliott flew over Gaston’s head and came back into play off the far post. Charlie Adam burst forward and found Danny Mullen, who curled his shot wide as the Dee kept pressing for a vital second goal.

After 60 minutes the Dee were well on top and looking like adding to their lead, but it was Arbroath who woke up and came back strongly in the last half hour. Careless defending allowed Arbroath two chances in quick succession. James Craigen played a harmless low ball back into the penalty area following a cleared free kick. Dundee players seemed to slip, allowing the ball to run through to Dale Hilson in space, but he thrashed his shot well over the bar. Two minutes later Jason Thomson was left unmarked at a corner and Jack Hamilton pulled off a marvellous close range save from his powerful header.

Arbroath kept pushing men forward, looking for an equaliser, but the Dundee defence had recovered its composure and didn’t allow them any more clear chances.

After sending on all three substitutes the Lichties had to play on with 10 men for 13 minutes when Thomas O’Brien went off to receive treatment for a cut head. Twice Dundee almost took advantage of Arbroath trying to attack while being a man down. Each time the Dark Blues had men over in wide areas, but they couldn’t get a final shot in on either occasion. Dundee had the last chance of the game when Mullen’s shot from 18 yards was deflected round the post.

O’Brien returned to the field at the start of injury time but Arbroath struggled to get near the Dundee penalty in these last few minutes as the Dee ran the clock down in the Lichties’ half.

After Dundee’s defensive woes this season a clean sheet today was important and very welcome. The defence did well apart from that brief blip in the middle of the second half. For the first hour Dundee were dominant in dominant and creative in the final third. A second goal would have been well deserved and made the last half hour more comfortable. However, the Dark Blues did enough to earn their victory and end the recent run of disappointing results.