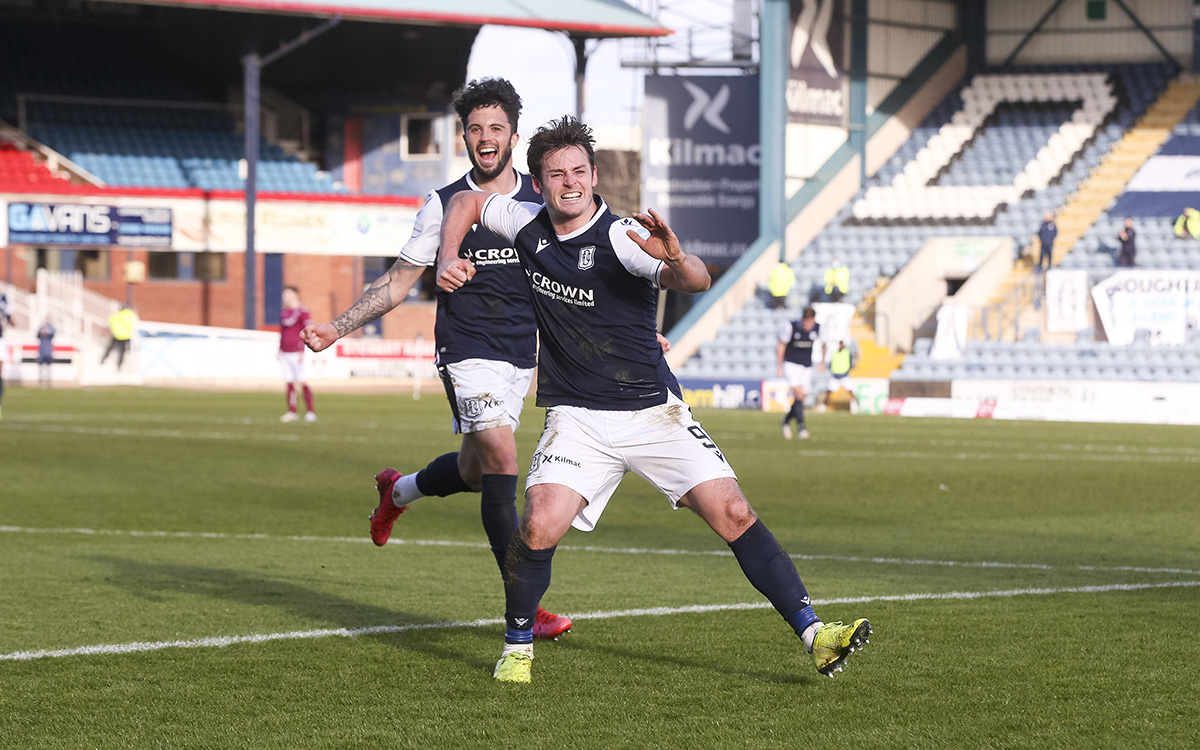 Dundee returned to the Championship play-off positions with a 2-0 victory over Arbroath at the Kilmac Stadium. After a goalless first half Danny Mullen put the Dee ahead early in the second half and Max Anderson made the points safe when he grabbed a late goal. The defence claimed a welcome clean sheet after conceding goals in each of the last 12 games, and had Adam Legzdins to thank for that. The goalkeeper marked his home debut by saving a first half penalty.

The Dark Blues made two changes to the team that played Hearts last week. Adam Legzdins replaced Jack Hamilton in goal and Malachi Fagan-Walcott came in for the injured Liam Fontaine in central defence. It was the first home game for both players.

Dundee did all the early attacking, probing for an opening goal without creating any serious danger to the Arbroath goal. After barely crossing the halfway line it was the Lichties who recorded the first shot after 13 minutes. Michael McKenna’s 25 yard shot flew through a crowd of legs, taking a slight deflection, and Adam Legzdins had to react smartly to clutch the ball. The Arbroath goalie, Derek Gaston, needed equally quick reactions to keep out Danny Mullen’s flick from a Paul McMullan free kick.

Gaston was called into action again when McMullan threaded a pass through for Max Anderson, but the Lichties keeper was quickly off his line to block. After those two close things the game went flat with the Dee losing some of their impetus while Arbroath offered little threat.

The visitors had a great chance to take the lead against the run of play from the penalty spot after half an hour. Malachi Fagan-Walcott was judged by Mr Collum to have fouled Jasomn Thomson following a corner. However, Adam Legzdins gave the Dee the chance to earn a clean sheet with a terrific save low down to his left from Michael McKenna’s spot kick.

In the last five minutes of the half Dundee perked up and put the Arbroath defence under sustained pressure. A fierce Jordan Marshall shot from 20 yards was fumbled by Gaston, but the keeper recovered before Jason Cummings could prod the ball over the line. Cummings then wasted a good opportunity, firing over from 12 yards after a Fagan-Walcott shot was blocked.

The Dark Blues started the second half with an even more glaring miss. Arbroath failed to clear a Marshall cross and Danny Mullen shot wildly over the bar from 10 yards with the goal gaping.

The Dee number 9 quickly made full amends for his miss. Paul McMullan made a great run down the right, beating two men, and crossed for MULLEN to score with a powerful header despite the efforts of O’Brien on the goalline to keep the ball out.

That was the end of Danny Mullen’s game because he was immediately replaced by Charlie Adam.

Paul McMullan flashed a low cross shot wide a few minutes after the goal, but it took the Dee a while to get back into their attacking stride. Dundee were forced to make a defensive change when Malachi Fagan-Walcott went off injured and Sam Fisher came on. The youngster had a solid game, slotting in smoothly to the defence.

The Lichties had their best spell of the match in the middle of the second half without opening up the Dee defence or forcing Legzdins into a save. The nearest effort from the visitors was a free kick by Dale Hilson from 35 yards that Legzdins allowed to fly wide.

Dundee picked up the pace after that and looked increasingly dangerous. Declan McDaid had a shot from 10 yards blocked after a cross broke to him. A feature of the game was that Arbroath struggled to clear dangerous crosses from both wings, and that led to the crucial second goal after 82 minutes.

Paul McMullan claimed his sixth assist in his sixth game in Dark Blue with another fine run and cross from the byline. Arbroath couldn’t clear and Max ANDERSON pounced to rifle home his second goal for the Dee from 10 yards, his shot flying off a defender on the line and into the roof of the net.

That goal settled the points and Dundee held out comfortably to collect the clean sheet that the defence deserved. This was no classic, but the Dark Blues were certainly good enough to deserve their win. Without being on top form Dundee had the edge on Arbroath all over the park and looked very dangerous whenever they stepped up their game and turned the screw on the Lichties. The Dee repeatedly got into good wide positions, especially in the second half, and the quality of the crosses meant that goals were inevitable. The balance of the team was good, and the substitutions didn’t disrupt the Dee. There is still plenty of room for improvement, but the Dark Blues looked to be on the right track.