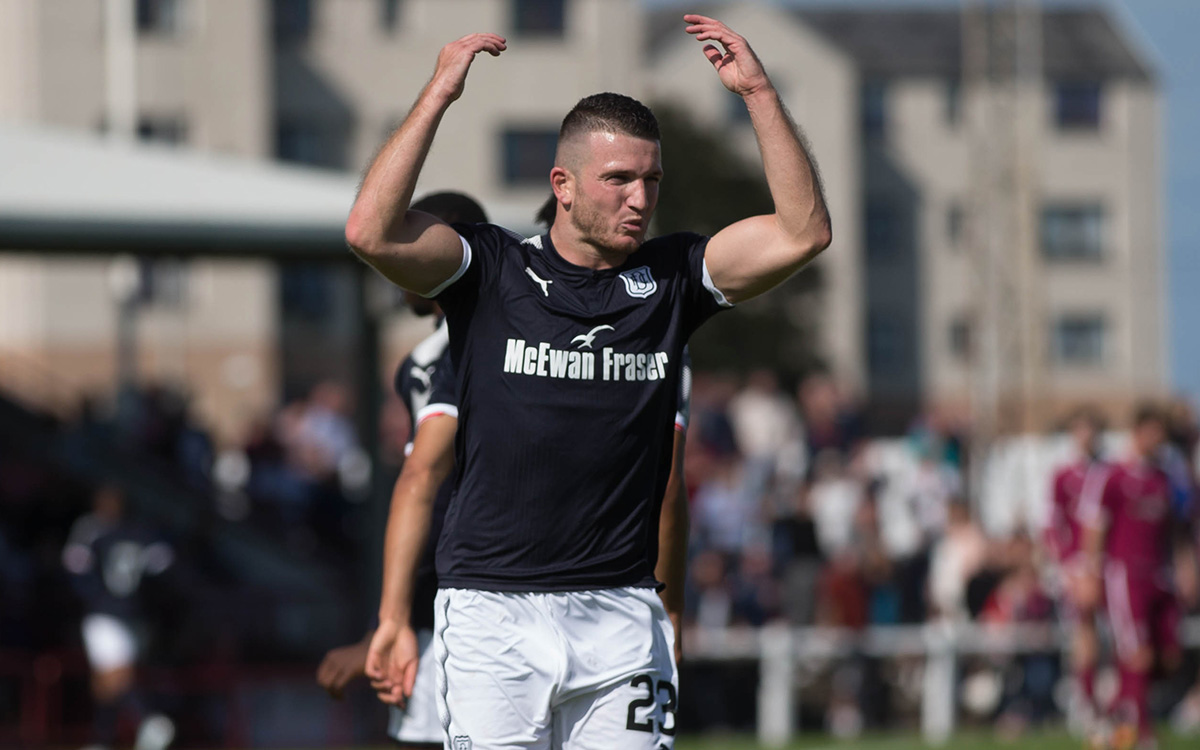 Dundee overcame a stiff challenge from Arbroath in the Gayfield sunshine, emerging with a 2-1 victory thanks to late goals from Faissal El Bakhtaoui and Randy Wolters. Arbroath had deservedly held a half time lead through a Steven Doris penalty and looked likely to hold on for a win till the Dee’s late recovery.

The Dark Blues fielded the same three trialists that had featured against St Mirren. The second half midfield trialist on Tuesday night gave up his number 22 shirt to Jack Hendry, playing as number 24 today.

The game took a while to get going as both teams moved the ball around neatly without causing any real problems to the defences. When the tough tackling started the players found that Mr Steven was taking a stricter line than Tuesday night’s referee. However, there was no controversy about the opening goal after 17 minutes.

Jack Hendry was short with a passback under pressure from Steven Doris. Hendry’s attempted recovery tackle fouled DORIS, who blasted the resulting spot-kick high into the net.

Cammy Kerr and Kevin Holt were getting plenty of exercise chasing balls into space on the wings, but Dundee struggled to find an end product to some promising moves. Arbroath keeper Ricky Gomes had a disappointingly easy first, having to deal only with some awkward crosses and a 25 yard shot straight at his body from Lewis Spence.

The Lichties were doing less attacking, but looked more likely to score the next goal. Another spot of carelessness nearly gave them a second. Spence’s loose backpass went straight to Gavin Swankie, but trialist 17 made a great covering tackle as Doris was about to shoot.

After a disappointing first half Dundee’s second half team started with greater urgency. Randy Wolters combined well with trialist 17, who had moved to left back. He returned to central defence on the hour mark when Darren O’Dea went off and Danny Williams came on at left back.

Scott Allan’s imaginative passing looked the most likely route back into the game for the Dee and with 15 minutes to go his quick free kick sent Mark O’Hara clear down the right. His low cross found Wolters but substitute keeper Calum Brodie saved well from the Dutch winger.

The Dark Blues had a scare after 80 minutes following a misunderstanding between Scott Bain and trialist 17. Bryan Prunty helped himself to the ball and found Kane Hester whose shot flew inches past the post.

Williams had been spending much of the game pushing forward down the left and his run onto Wolters’ pass led to the equaliser with nine minutes left. He hit a low cross across goal for Craig Wighton to shoot against the post. Faissal EL BAKHTAOUI collected the loose ball and flashed a wonderful shot across Brodie and into the top corner.

Three minutes later Wighton’s pass down the right was deflected into the path of Allan and his low cross was hammered into the net by Randy WOLTERS coming in from the left.

El Bakhtaoui came close to a third when he nicked a long ball away from Brodie, but he couldn’t turn the ball into the net from a difficult angle.

Dundee’s late surge forced a win that was possibly harsh on an Arbroath side who were always hard working and well organised, especially in defence.

The Dark Blues first half performance was forgettable. Although there were some good individual performances the team did not play with any intensity and the Dee’s attacks were handled welll by the Lichties’ defence. The second half brought more penetration, but it was only in the last 15 minutes that Dundee posed serious threats to the home side. The late win was welcome, but the performance for those first 75 minutes was hardly impressive.