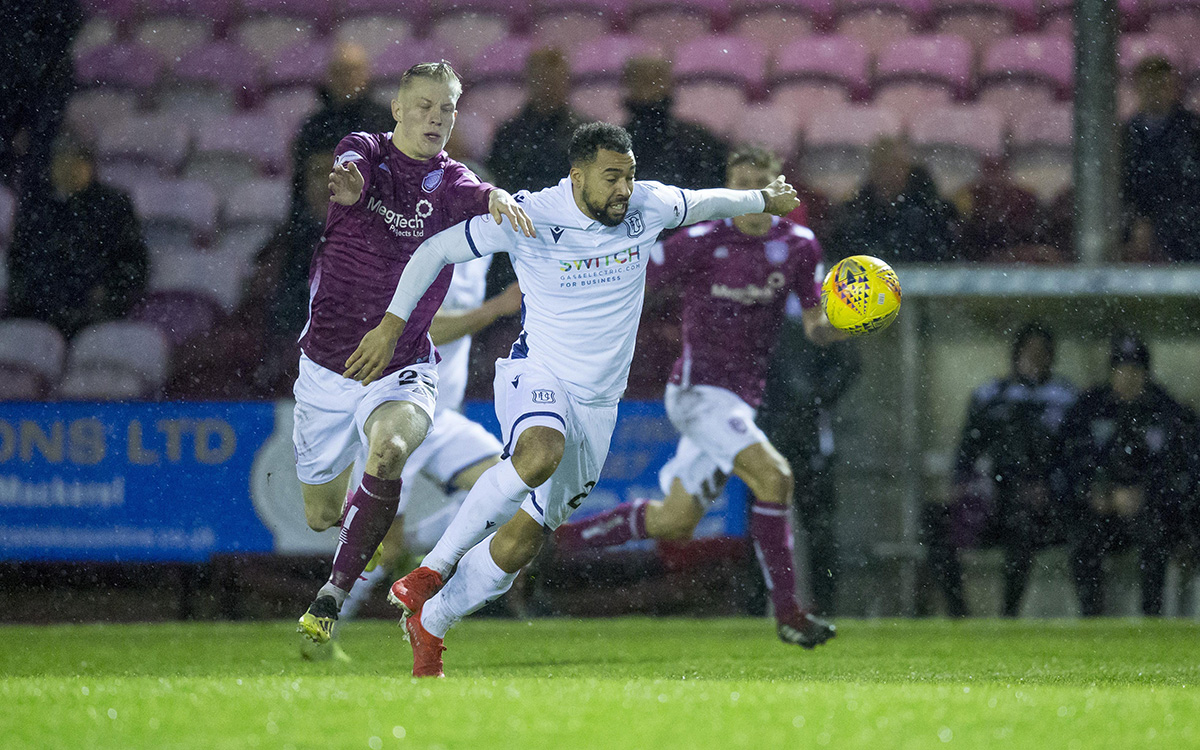 Dundee had to settle for a point in a 1-1 draw at the end of a tough trip up the coast to Arbroath. The Lichties had the better of the first half and deserved to be ahead at half time after Bobby Linn’s goal. The Dee perked up in the second half and Kane Hemmings headed the equaliser after an hour. In an open and entertaining final half hour neither side could find the composure to take all three points.

The Dark Blues made two changes. Shaun Byrne and Danny Johnson came in as the Dee switched to a 4-4-2 formation, with Finlay Robertson moving onto the bench and Jamie Ness injured. Arbroath brought in Derek Gaston in goal and Scott Stewart in attack for Darren Jamieson and Luke Donnelly.

Dundee started by pushing Arbroath back for the first few minutes. The ball was often in the home penalty area, but without the Lichties’ defence being in any real danger.

When Arbroath started to attack they were more impressive than the rather ponderous Dee. The Lichties continually threatened to unpick Dundee’s defence with good, quick passing that sent runners into threatening positions.

Although Arbroath were dangerous in open play their first two chances came from set pieces. Centre back Thomas Hamilton had the first chance when the ball broke kindly to him in space 10 yards from goal following a free kick. Jordon Forster rescued the Dee by throwing himself into a great block. Michael McKenna also had a chance from a free kick, but he sent his header straight at Jack Hamilton.

Dundee continued to make frequent trips into Arbroath’s penalty area, but the home defence was always ready and waiting. Home keeper Gaston wasn’t called upon to do anything difficult in the first half.

The Dark Blues had a loud appeal for handball in a scramble in the home penalty area, and a minute later Graham Dorrans went close with a 20 yard free kick. That brief period of pressure didn’t amount to anything and almost immediately the Lichties moved up the park to take the lead.

Dundee failed to deal with a high ball forty yards from goal. Scott Stewart had far too much space as he collected the ball. He had time to pick his pass to Bobby LINN, who was equally untroubled by the Dee defence as he bent his shot round Hamilton from the edge of the penalty area.

In the first half the Lichties had the dubious benefit of a strong wind that disrupted play for both sides rather than offering any help. When the teams turned round the Dark Blues did look happier playing with the wind at their backs and picked up the pace. Dundee were now playing with more urgency, moving the ball more quickly and effectively in the Arbroath half.

Paul McGowan replaced Shaun Byrne early in the second half and the change helped the Dee midfield play further up the park and offer more support to the strikers. The change quickly bore fruit when Dundee scored at the end of a spell of prolonged pressure. Kane HEMMINGS found space 10 yards out and firmly headed Cammy Kerr’s cross into the corner of the Lichties’ goal.

The Dark Blues looked set to push on for a winner, but had difficulty finding the right ending to their attacks against a determined defence. The best chance in the later stages fell to Arbroath after the Dundee defence failed to clear. From 12 yards Bobby Linn had time to pick his spot, but fired over the bar.

Paul McGowan showed clever footwork to nip along the byline and chip a cross to the far post where it was scrambled clear for a corner. Danny Johnson had a couple of half chances. Hemmings stepped over a pass from Declan McDaid to let the ball run through to Johnson, who dragged his shot across goal. In injury time Johnson missed with an identical effort after he was picked out by a lovely pass from substitute Fin Robertson.

In the last few minutes Arbroath were happy to settle for a well earned point, but still looked capable of catching the Dark Blues out on the break. At the final whistle the home supporters were happier with a draw than the travelling Dees, but a win would have flattered the Dee. They were second best in the first half and although they improved significantly after the break the Lichties had done enough to deserve at least a point.