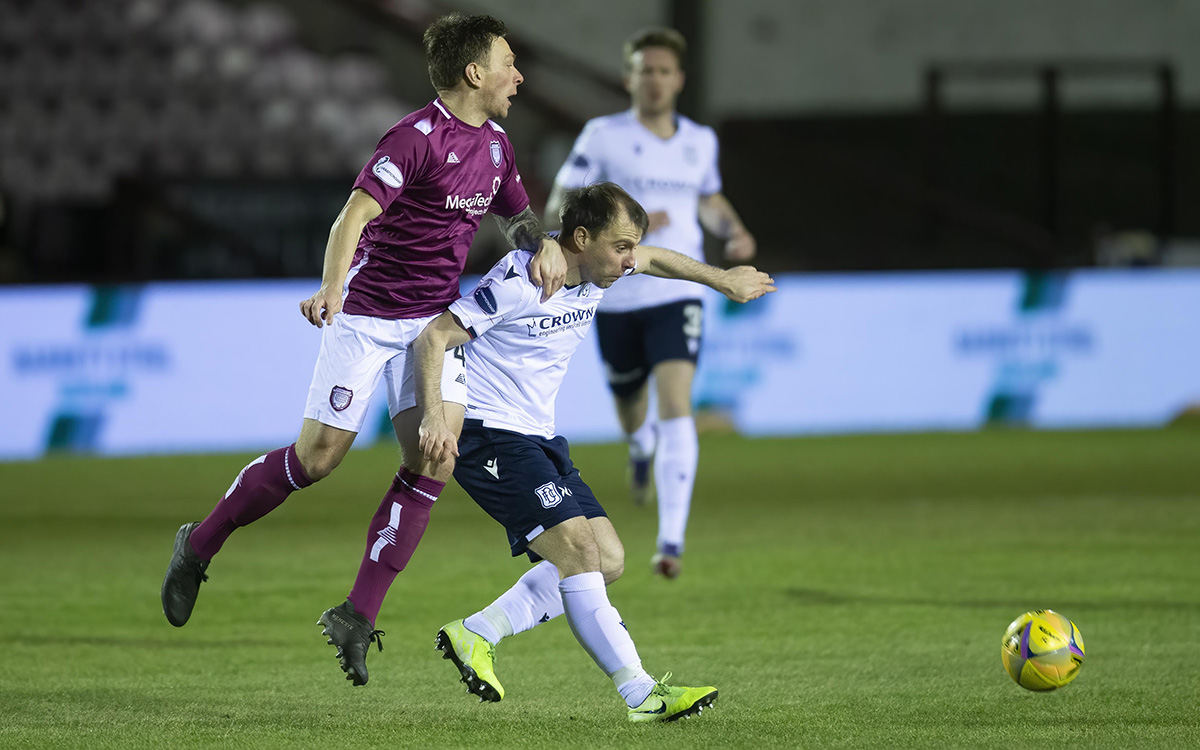 Dundee were held to a 1-1 draw at Gayfield despite taking an early lead from a Charlie Adam penalty. The Dee passed up some great chances in the first half and were made to pay when Arbroath fought back after half time. Ricky Little equalised for the Lichties midway through the second half. Dundee couldn’t find a winning goal and a point apiece was a fair outcome.

The Dark Blues made two changes from the cup tie against Bonnyrigg in the cup, reverting to the team that started the win over Hearts. Christie Elliott and Jordan McGhee returned in the places of Jordon Forster and Finlay Robertson.

Dundee began positively and did all the early attacking. The opening goal after eight minutes was well deserved. Osman Sow tried to flick Jordan Marshall’s cross past Thomas O’Brien. The central defender stuck his arm out, made contact with the ball, and Charlie ADAM smashed the inevitable penalty past Derek Gaston.

Jordan McGhee picked up an eary injury to his arm and after 15 minutes he was replaced by Cammy Kerr who was a straight replacement in midfield.

Arbroath barely ventured into the Dundee half in the first 10 minutes but gradually started to fight their way into the game. After a couple of promising attacks that had no end product they might have sneaked an equaliser midway through the half. Michael Ruth’s persistence kept the ball in play on the byline for Dale Hilson to cross, but Scott Stewart miskicked.

Dundee should have made the Lichties pay for that miss with a second goal after a fast break out of defence. Paul McGowan and Charlie Adam set up a great chance for Danny Mullen who should have scored but shot against the top of the crossbar from 15 yards.

The Dark Blues had to make a second enforced change when Danny Mullen was forced out of the game with an injury late in the first half and Jonathan Afolabi came on.

Dundee had the edge in the later stages of the first half, putting some promising crosses into the box without creating any real chances until injury time. McGowan’s backheeled pass sent Marshall to the byline and his low cross was met perfectly by Osman Sow’s volley only for Gaston to find himself in the right place by his near post to block with his feet.

Those missed chances would prove costly in a second half in wich the Dark Blues never managed to get a passing game going. The pattern for the half was set early on when Dundee broke and had three attackers against a single defender, only for Sow to run carelessly offside.

Most of the game was played in the Arbroath half but the home goal was never in serious danger. The Lichties were working hard, but while they were successful in stopping the Dee playing they were offering little goal threat themselves.

Dundee had to use their third substitute following another injury when Liam Fontaine limped off early in the second half with Jordon Forster coming into central defence.

The Arbroath equaliser after 65 minutes was an all round shocker for the Dark Blues. The ball was lost carelessly in midfield and when the cross came into the box Forster sliced his clearance out for a corner. Bobby Linn fired it over and Ricky LITTLE was unmarked six yards out to leave Hamilton helpless with his powerful header.

The Lichties took heart from the gift and looked fully capable of going on to win. The Dark Blues were creating little, though Adam almost caught Gaston by surprise when he smashed a shot to the near post from an impossible angle after the ball was returned to him at a corner, but the keeper managed to push the ball wide of the post.

Arbroath created the best move of the match with a neat move down the left which ended with Luke Donnelly’s clever reverse pass releasing Dale Hilson. The striker should perhaps have pulled the ball back for a teammate but tried to beat Hamilton at the near post only for the Dee keeper to block.

Bobby Linn had a final chance for Arbroath when Michael McKenna slipped him in, but he failed to connect cleanly with his shot and Hamilton saved easily.

The Dark Blues dominated the final 10 minutes, but without any real conviction against a hard working and well organised Lichties defence. The only chance came in injury time when it took a remarkable headed clearance on the goalline by O’Brien to stop Sow nodding in an inviting cross that Adam chipped over the goalkeeper.

In the end Dundee didn’t do enough to deserve all three points. They failed to take good chances in the first half and couldn’t create enough danger in the second. The team may have been disrupted by the succession of injuries, but the Dark Blues should still have been able to take a grip of the game and finish off Arbroath. Losing a soft equaliser from a set piece was particularly disappointing.

The unbeaten run may have been extended to eight games, but the Dee have kept a clean sheet in only one of those matches, the first one. Dundee have been scoring freely in recent weeks but tonight the attack was off the pace, as indeed was the rest of the team. The Lichties are bottom of the division, but they were well worth the point they earned for their fighting second half.