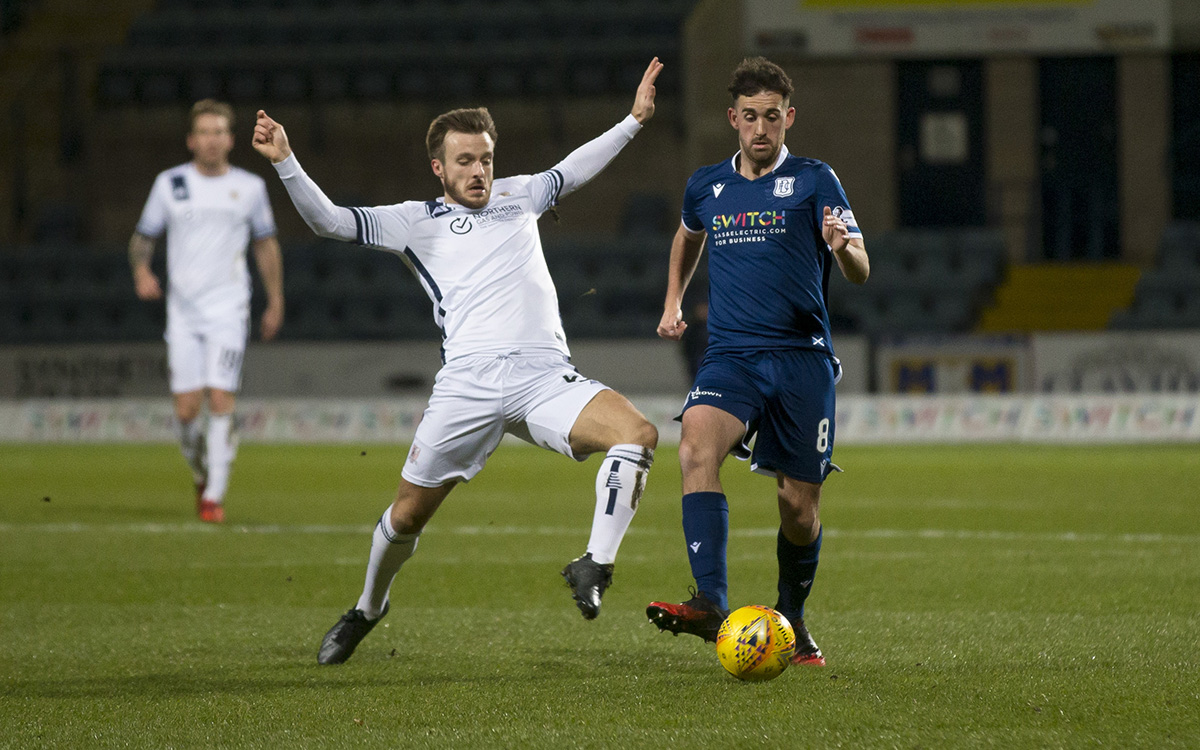 Dundee were held to a frustrating goalless draw at home to Alloa Athletic tonight. The Dark Blues dominated throughout, putting the visitors under sustained and intense pressure but poor finishing and an inspired performance by Wasps’ keeper Neil Parry meant the Dee had to settle for only a single point.

Dundee’s only change was forced because top scorer Kane Hemmings missed out through illness. Jordan McGhee replaced him but played in central midfield with Paul McGowan moving forward into a striking role. The Wasps made three changes. Neil Parry replaced Kieran Wright in goal while Jon Robertson and Scott Banks came in for Blair Malcolm and Alan Trouten.

Dundee were quickly onto the attack with Andrew Nelson surging through the middle to shoot wide from the edge of the penalty area in the first minute. Most of the early attacking came from the Dark Blues but Alloa looked neat and purposeful when they came forward. Declan McDaid went close with a shot across goal and the Wasps’ Kevin O’Hara curled a 20 yard shot round Conor Hazard but wide.

The longer the first half wore on the more pressure Dundee exerted. Graham Dorrans saw a powerful shot following a corner deflected and then blocked in front of goal. The Dark Blues always looked dangerous in attack but they wasted a series of fine chances.

Nelson blasted a low cross through the goalmouth with no takers. McDaid smashed an identical ball back across goal only for Nelson to shoot wide from beyond the far post with the keeper stranded. Jordon Forster powered in a header from a corner but Neil Parry managed to block and Nelson headed the rebound against the crossbar and over.

Paul McGowan headed on a long throw from Josh Meekings and Nelson’s header from a couple of yards out was somehow pushed around the post by Parry. Nelson was getting into great positions, but his finishing was letting him down, and he missed another great opportunity at the end of a lightning break from a rare Alloa attack. Dorrans rolled a pass across goal and Nelson took it first time, shooting over the bar. The last Dee effort of the half came from another McDaid cross shot that flew across goal and past the far post.

When Jordan McGhee miskicked in front of goal from a Christie Elliott cross at the start of the second half it looked as if the game was going to continue in the same vein. If anything Dundee put Alloa under even fiercer pressure, The visitors were pinned back in their own penalty area for long stretches.

What was different from the first half was that the Alloa defence was tighter and the Dark Blues couldn’t find the right cross or final ball to open them up. There was no lack of effort from the Dark Blues. Throughout the second half they hurled themselves at the Wasps defence as if the game was already in injury time. Perhaps that was the problem: there was too much urgency and not enough composure.

Midway through the second half Ollie Crankshaw replaced Jordan McGhee and quickly posed an extra attacking threat for Alloa to contend with. He was on the end of a few rough tackles as he ran at the Wasps defence. His cross from the right was met by Forster’s head, but Parry dived to grab the ball on the goalline. Crankshaw switched to the left and won a free kick on the very edge of the penalty area. McDaid whipped the free kick through the crowded goalmouth only for Parry to make a fine reaction save as the ball seemed to be heading inside the far post.

Neil Parry finally made a mistake when he failed to hold a corner, but Dundee couldn’t force the ball home in the resulting scramble. Dundee kept throwing men forward in the last few minutes and Crankshaw was close to a winner when he twisted and turned on a run in from the left before flashing a shot inches outside the angle of post and crossbar. The final chance came deep in injury time when Parry saved again, managing to block a point blank header from Shaun Byrne.

You don’t often see draws as one sided as this one. Conor Hazard did well to maintain his concentration when the ballboys were more involved in the action than he was. Alloa didn’t have a shot on target and barely managed an attack during a second half in which they were forced to defend deep and desperately. The Dundee defenders main involvement was trying to help the midfield set up attacks. The midfield was in complete control, especially after half time, but they couldn’t use that dominance to set up match winning chances in the second half.

If Dundee had taken one of those first half chances they would probably have gone on to win comfortably. They have only themselves to blame for failing to win a game in which they were so dominant. A third successive clean sheet was a plus point, but that is scant consolation when the Dee should have had an emphatic victory. Alloa may have ridden their luck in the first half but deserve credit for the way they kept their heads and managed to frustrate Dundee despite being battered relentlessly after half time.