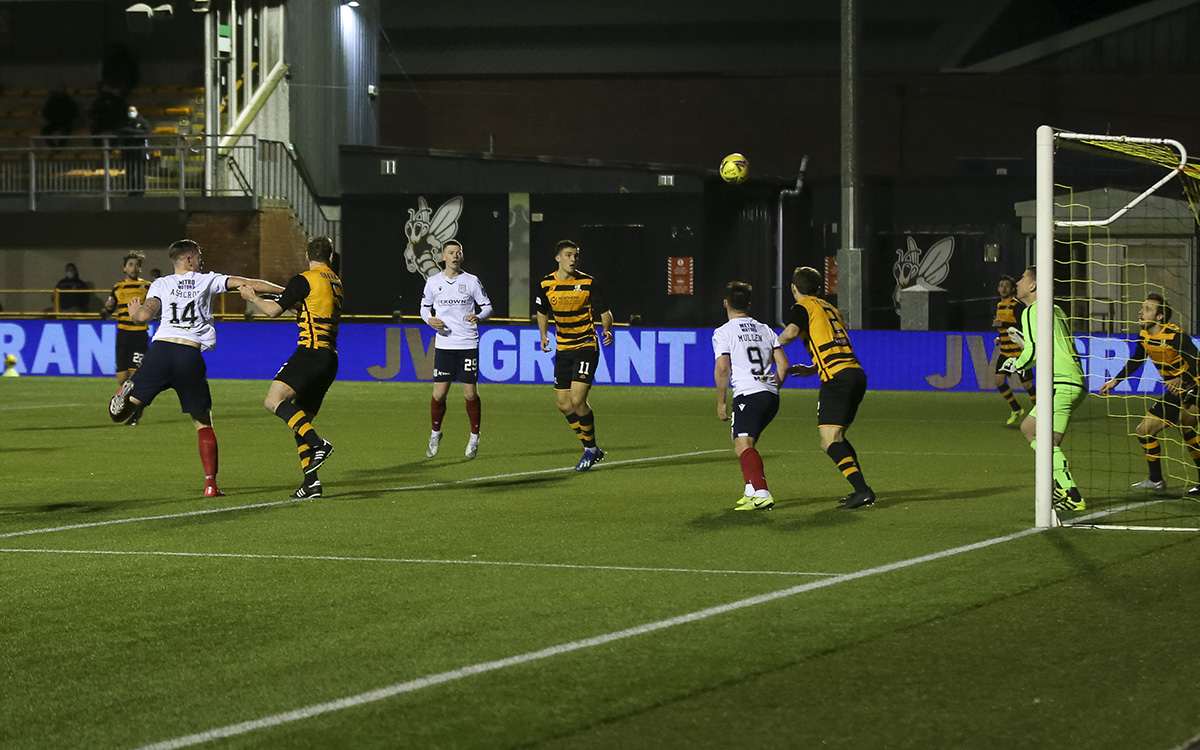 The Dark Blues bounced back from the midweek defeat with a solid 3-0 away win at Alloa. Lee Ashcroft scored with headers from corners either side of half time and Max Anderson completed the scoring late on. Dundee always had an edge over a Wasps team who have given them problems over the last year and they were well worth their comfortable win.

The only change to the Dee’s starting line-up was Declan McDaid returning in the place of Charlie Adam who was on the bench.

The match got off to a lively start with the Wasps attacking dangerously in the first minute. Dundee quickly took over and settled into a prolonged spell of domination, exploiting the wide areas well and delivering a succession of good crosses.

The Dark Blues had two good headed chances. Jason Cummings sent his effort from Declan McDaid’s cross straight to Alloa keeper Neil Parry. Lee Ashcroft should have scored from a McGowan corner, but with the goalie stranded he sent his free header wide. He more than made up for that miss later on.

Dundee kept passing their way around the Alloa half looking for the opening Paul McMullan and Max Anderson combined well to set up Declan McDaid, who dragged his shot wide from the edge of the penalty area.

After a good opening 25 minutes the Dee went through a quieter period as Alloa came into the game more. However, Adam Legzdins didn’t have to deal with any shots on target. The closest that the Wasps came to a first half goal was a penalty claim when Sam Fisher’s tackle caught Hetherington after he screwed his shot wide.

The Dark Blues picked up the pace again and finished the first half well on top. Four minutes from the interval they took the lead. Paul McGowan’s corner was headed powerfully home at the far post by Lee ASHCROFT.

At the very end of the half the Dee put together a flowing move that ended with Cummings attempting an overhead kick. He connected cleanly, but sent his shot straight at Parry.

Cummings almost grabbed the second goal at the start of the second half. He forced his way through the middle but Parry saved well. Alloa then had a dangerous few minutes, but they still couldn’t force Legzdins into making a save.

After 56 minutes the Dee had the vital second goal. They broke out of defence and Declam McDaid’s shot was deflected for a corner. The script was identical to the first goal. Paul McGowan provided a fine delivery and Lee ASHCROFT rose to power his header past Parry.

The victory was never in doubt after that. Danny Mullen headed wide from a Cummings chip after a good build up as Dundee kept threatening to add more goals.

The Wasps had a spell of pressure in the middle of the half. Scott Taggart’s free kick from wide on the left had to be touched over the bar by Legzdins. They looked dangerous a couple of times at set pieces, but couldn’t get a shot or header on target.

Any lingering worries Dark Blues supporters might have had were ended after 79 minutes. Paul McMullen moved over to the left wing, cut infield, and played a clever reverse pass through the Wasps defence for Max ANDERSON to take a touch and shoot past Parry.

McMullan almost made it four when he picked the ball up on the half way line and kept going, beating Taggart, before forcing a good save from Parry.

Dundee saw the game out comfortably to take all three points and claim a very welcome clean sheet that must have been particularly pleasing for young Sam Fisher. The whole Dee defence can be pleased with their evening, and not just because of Lee Ashcroft’s two goals.

The rest of the team were on their game too. The wide players were effective, and ably supported in their attacking by the full backs. Paul McMullan contributed his eighth assist in the eight games he has played.

In central midfield Paul McGowan used his experience to complement the youthful energy of Max Anderson. The young midfielder had an excellent game and his willingness to keep making runs into the penalty area was rewarded with his third goal in five games. Jason Cummings might have a couple of goals on another day, and Danny Mullen worked hard in support and providing back-up to the midfield.

After Tuesday’s disappointment this was exactly the response we were looking for from the Dee.