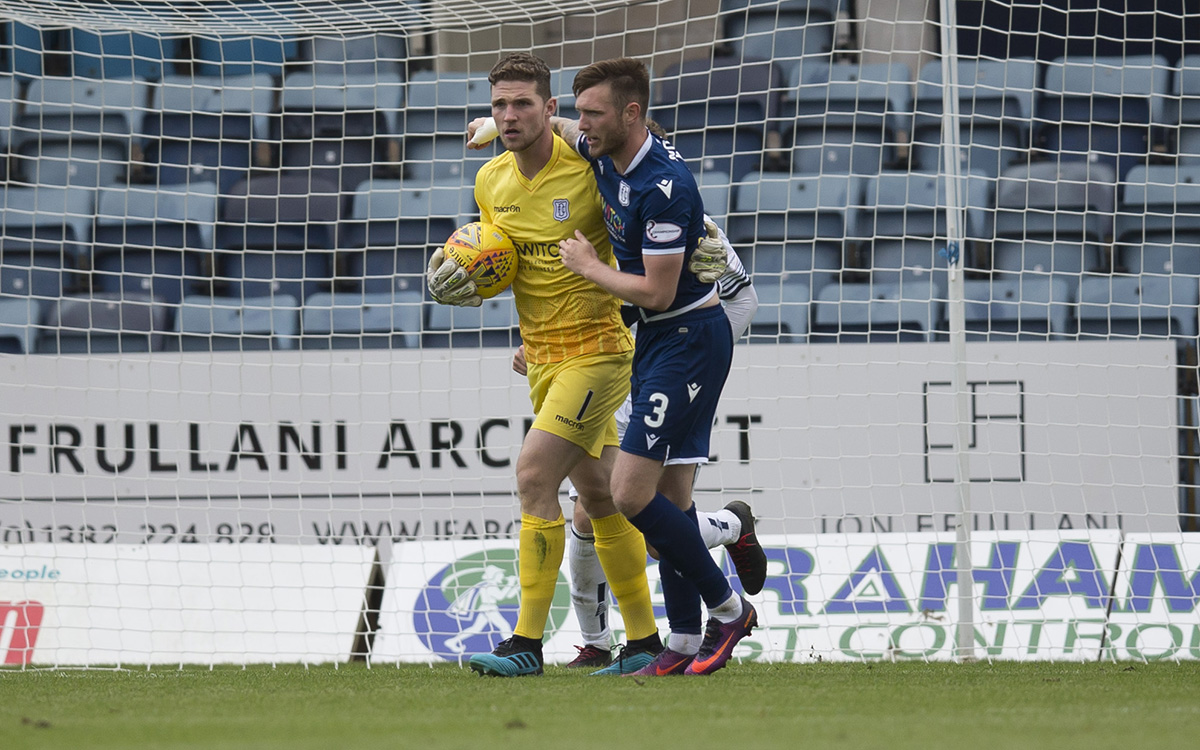 The Dark Blues got back on track with a hard fought 2-1 win over Alloa Athletic at the Kilmac Stadium at Dens Park. Danny Johnson gave the Dee an early lead only for Liam Dick to scramble a quick equaliser. Jordan McGhee scored the winner late in the first half and Jack Hamilton made a vital penalty save after the break. Dundee couldn’t add to their lead but will be happy with three points against difficult opponents.

The starting eleven had six changes from last week. Jack Hamilton, Jordon Forster, Jordan Marshall, Fin Robertson and Danny Johnson all returned and Josh McPake was given his first start.

The Dark Blues were on the attack from the first whistle, moving forward with pace and invention. The opening goal arrived after only two minutes. Jordon Forster swept a cross from the right wing to the far post where Declan McDaid headed powerfully against the crossbar. Danny JOHNSON was first to the rebound and smashed the ball home.

Dundee continued to attack confidently but, with less of the ball, Alloa showed they were dangerous opponents. The Wasps were organised and counter-attacked menacingly. Their equaliser after 10 minutes, however, was from a poorly defended set piece. A corner was allowed to drop into the six yard area and the resulting chaotic pinball session ended with Liam DICK’s shot cannoning off a defender and inside the post.

The Dark Blues picked themselves up and went on to dominate the rest of the first half. The Dee were using the wings to great effect, and Jordan Marshall combined well with Josh McPake as the pair caused Alloa’s defence endless problems.

Paul McGowan ended a good move, started by Declan McDaid, with a shot that took a deflection and slipped just past the post. Alloa were pinned back in their own half for most of the first half but in a rare attack Jack Hamilton had to turn Kevin Cawley’s powerful drive from the edge of the penalty area over the crossbar.

The Dee attacked relentlessly and McPake was unlucky when he was tripped a foot outside the penalty area after yet another penetrating run from the left wing. Jamie MacDonald in the Wasps’ goal had to be alert to prevent an own goal when a cross by Cammy Kerr broke off a defender. A free kick from 30 yards by Jordan McGhee flicked off the defensive wall and sailed wide.

Seven minutes from half time Dundee eventually found the goal they deserved. After a corner was cleared Fin Robertson recycled the ball for the second phase like a veteran, finding Josh McPake wide on the left. McPake skipped past a defender, ran into the penalty area and slid a pass into the goalmouth for Jordan MCGHEE to run the ball into the net from close range.

Alloa provided the last action of an entertaining first half when Taggart mishit a shot, slicing the ball high into the air and forcing Jack Hamilton to backtrack and turn it over the bar.

Dundee started the second half as aggressively as they had the first and were unfortunate not to extend their lead. In the first minute McGowan miscued a shot from Kerr’s pass, sending the ball bobbling wide. A minute later McDaid’s free kick flew through the penalty area to the far post where Forster headed against the underside of the crossbar.

The Dark Blues looked as if they would go on to make victory safe but Alloa shocked them by winning a penalty against the run of play after 50 minutes. A good move down the left brought a cut back that was heading for Cawley but Shaun Byrne dived in with a challenge as he was about to shoot. Referee Mr Newlands pointed to the spot, but Jack Hamilton went the right way and saved well from Alan Trouten’s penalty.

Dundee lost the impressive McPake, who limped off early in the second half. The 18 year old received a rousing ovation after an excellent debut. Josh Todd replaced him, and was quickly in action, combining well in an inventive attack with Johnson. MacDonald was being kept busy in Alloa’s goal and did well to save McDaid’s header.

Midway through the second half Kane Hemmings came on for Danny Johnson. Almost immediately the Wasps got lucky with two penalty appeals within a minute of each other. The first, when Scott Taggart allowed a cross to brush off his arm, might have been a soft award but the second looked straightforward. Cammy Kerr was deep in Alloa’s penalty area and sidestepped a defender in front of goal. He was about to shoot only a few yards out when he was tripped from behind. A penalty seemed the obvious decision but the referee waved play on.

In the remaining 20 minutes of normal time Dundee had some promising attacks, but none that created serious danger. Alloa abandoned their cautious formation to try and push for an equaliser and moved the ball around well, creating a couple of good opportunities. The first was foiled by a great piece of backtracking by McDaid who ran back to make a vital penalty box interception. The next was when substitute Buchanan’s shot was deflected into the path of Robert Thomson, who poked his shot wide as Kerr challenged.

In injury time Kane Hemmings had the last attempt on goal but MacDonald stretched to turn his shot wide for a corner.

A win by a single goal against Alloa might not be an eye catching result, but this Wasps team are no lightweights in the Championship. They are capable of giving every side in the division a tough match and Dundee had to step up their game significantly from last week to beat them. The Dark Blues are still some way short of the potential these players have, and the consistent standard they will need to maintain to challenge at the top, but there were some pleasing signs today. Fin Robertson’s return brought increased composure to the midfield, and Josh McPake showed why he is rated so highly by his parent club Rangers.

The Dark Blues’ defending at set pieces wasn’t always as good as it should have been, and they occasionally looked vulnerable to fast breaks. However, the defenders moved forward well to support the midfield, and there was far more pace, creativity and penetration. Dundee have been too static at times this season, but today the tempo of play was much better with plenty of pace and menace in attack. After two disappointing results in recent weeks this was a welcome improvement and an enjoyable win.