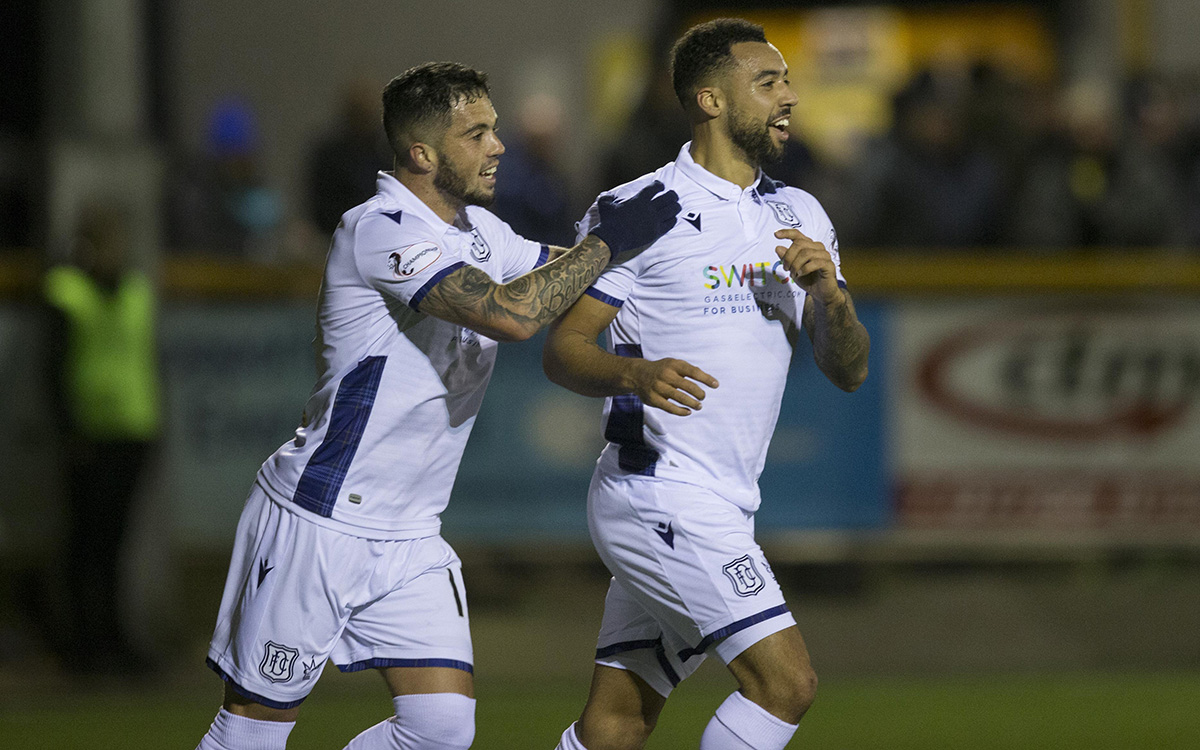 The Dark Blues put in their best performance of the season so far with a convincing 3-0 win at Alloa. Kane Hemmings scored twice in the first half and Sean Mackie came off the bench to make the points safe with his first touch 15 minutes from full time. The Wasps were always dangerous opponents and played good football, especially in the second half, which made the Dee’s dominant performance all the more pleasing.

Dundee were unchanged from the team that won at Ayr and the only change on the bench was Jamie Ness returning in the place of the injured Josh Todd. Alloa brought in Liam Buchanan for Kevin Cawley after pulling back a two goal deficit to draw against Queen of the South at home on Saturday.

Dundee started slowly but soon grew into the game and took control, which they never relinquished. Alloa were busy and neat, running and passing cleverly and posing some early problems for the Dee defence, without troubling Conor Hazard. Andrew Nelson had a couple of wayward early shots as the Dee started to pose a serious threat.

The opening goal came after 14 minutes. Running in from the right Kane HEMMINGS played a smart one-two with Declan McDaid before shooting under Jamie MacDonald.

Two minutes later Nelson almost made it two with a blistering 20 yard shot that MacDonald did very well to push over the crossbar.

The longer the first half wore on the more impressive the Dark Blues looked coming forward. The midfield started to dominate, holding the ball well and making passes that threw the home defence onto the back foot. Alloa’s attacks became less frequent and after one unsuccessful venture forward Dundee punished the Wasps with a clinical second goal on the break.

Graham Dorrans won the ball and sent Jordan Marshall racing down the left. The full back swung over a perfect cross for HEMMINGS to race in and volley his second goal home from six yards.

At the very end of the half Liam Buchanan managed to poke the ball into the Dee net after a messy corner, but he looked well offside and the goal was ruled out.

The game became more open after half time when Alloa made more strenuous efforts to get men forward. They often played their way into good positions, but couldn’t find the right final balls against the Dee defence to set up clear chances and stretch Conor Hazard.

Early in the second half, within 60 seconds both teams made fast, dangerous breaks and each time the two defences were relieved to cover. Paul McGowan wasted a terrific chance to make the points safe when he pulled his shot well over the bar after McDaid raced down the right and teed him up with a low pass.

Hemmings was close to claiming his hat trick when Dorrans sent him away down the left. MacDonald saved well from his low shot and McGowan was crowded out when he tried to follow up.

After 73 minutes Sean Mackie came on for Andrew Nelson and with his first touch of the ball he put the game out of the Wasps’ reach. Kane Hemmings won the ball 40 yards from goal and raced in on MacDonald. With the entire stadium expecting the striker to go for his hat trick he unselfishly rolled the ball across goal to let MACKIE shoot into the unguarded goal. It was an admirable piece of team play.

The rest of the game was spent with the Dee passing their way around in the Alloa half looking for a fourth goal, forcing the home players to run themselves into the ground chasing the ball. Hemmings should really have completed his hat trick, but scooped a plum chance over the bar after a lovely passing move.

The attitude of the players was summed up by Declan McDaid sprinting 20 yards to close down full back Jon Robertson just outside the home penalty area, two minutes from full time with the Dee three goals to the good.

In injury time Declan McDaid almost had the goal he deserved after yet another fine move, but MacDonald foiled him with a fine save.

Dundee were excellent tonight and outplayed an Alloa team that is capable of beating anyone in this division. The home side played some attractive football and had good moments, but Dundee were in charge almost from the start. The Dark Blues have had good spells in games this, but this was the first time that they have put together a solid performance with no dips. Three goals and a clean sheet on the road, to follow up the great win at Ayr on Friday, made this a very pleasing and enjoyable night for the travelling fans. That’s the first time the Dee have recorded back to back wins in the James McPake era. They must build on that now.

Booked: Nelson (foul on Brown), Hemmings (kicking the ball away).