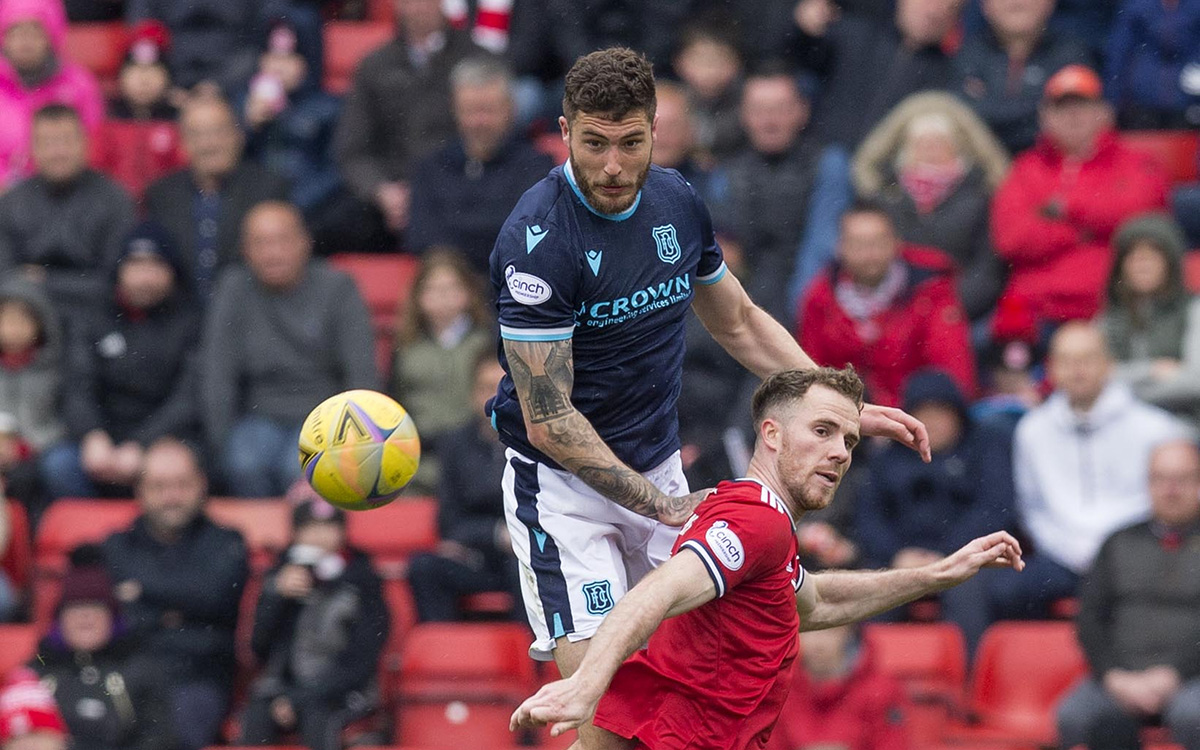 Dundee went down to a narrow 1-0 defeat against Aberdeen at Pittodrie losing out to Lewis Ferguson’s second half penalty. The Dee put in a good first half performance and should have been ahead at half time. Aberdeen came back strongly in the second half and the Dark Blues could not save a point after Ferguson scored the winner with 20 minutes left to play.

Dundee made two changes from the team that drew with St Johnstone last week. Ian Lawlor was unavailable through illness so Harrison Sharp played in goal. Shaun Byrne was replaced by Niall McGinn who came in to face his old club.

Lewis Ferguson tried to make the headlines with an audacious attempt from the half-way line at kick-off. With Harrison backtracking the shot dropped over the crossbar.

Aberdeen manager had told his players to start on the front foot and take the game to Dundee, but that call went unheeded. For the first half hour the Dark Blues were the better and more dangerous side. Joe Lewis made three fine saves to keep the Dons in the game as his defence and midfield gave the ball away and failed to watch the Dee’s runners.

Danny Mullen’s shot from 18 yards struck a defender and Paul McGowan’s close range was saved instinctively by Lewis. A few minutes later Max Anderson’s pressing won the ball from Ferguson outside the Aberdeen penalty area. Mullen’s quick shot was heading for the top corner but Lewis pulled off a tremendous save to touch the ball over the bar.

Aberdeen didn’t learn from that and Calvin Ramsay lost possession, allowing Niall McGinn to play a quick low cross. Again Lewis made a fine save from Paul McMullan’s flicked volley.

The Dee had been more composed and effective on the ball, playing some good football moving through the midfield. The Dons struggled to put their game together in the opening half hour but improved ominously in in the last 15 minutes of the half.

Aberdeen might have taken their game up a level, but they couldn’t create chances as good as the Dee’s. Sharp made a decent save from Connor Barron’s deflected 20 yard effort and Barron hit another shot wide with Sharp covering it.

The Dark Blues’ failure to score while they were on top and creating chances came back to haunt them in the second half. After half time Aberdeen were the better side without ever being truly impressive or dominant.

Dundee had an escape at the start of the second half when Cammy Kerr’s tackle brought down Jack MacKenzie inside the penalty area. It was a plausible shout for a spot kick, but Willie Collum was unconvinced and awarded a corner instead.

Vicente Besuijen raced onto a pass down the left and his pace took him clear. Before the defence could close him down he squeezed a shot past Sharp and outside the far post. Besuijen posed constant problems with his pace speed and skill, but frustrated his teammates with some poor decision making and erratic final balls.

Charlie Adam took a knock early in the second half and he had to make way for Josh Mulligan.

Aberdeen were vulnerable from set pieces when they struggled to cope with Dundee’s deliveries and the physical presence of the the Dark Blues’ central defenders. Ryan Sweeney was close to putting the Dee ahead from a corner, but his header was cleared off the line by Ramsay.

Harrison Sharp pulled off the save of the game, an outstanding stop from Christian Ramirez. The Dons’ striker had time and space to pick his spot from 18 yards but the young Dee keeper made a wonderful save to keep the ball out of his left hand bottom corner.

Midway through the half Mark McGhee decided that it was win or bust, sending on Luke McCowan and Zak Rudden for Max Anderson and Niall McGinn. Dundee were playing three up front as they set out to try and grab a priceless win.

For a few minutes this looked promising but it was Aberdeen who got the crucial break.

Jonny Hayes ran into the penalty area and was downed by a combination of Paul McGowan and Jordan Marshall. It was as credible a claim as the earlier shout, but this time luck wasn’t on the Dee’s side. Lewis FERGUSON sent his penalty kick straight down the middle to score.

Taking the lead seemed to make Aberdeen more nervous and they sat back, but without slamming the defensive door tightly shut. The Dark Blues put attacks together that offered the supporters some hope and stopped the home fans relaxing.

The Don’s defence unconvincingly scrambled a free kick from Luke McCowan away for a corner from which Josh Mulligan went close. His powerful downward header bounced up and over the bar.

Dundee’s last chance came from a good break out of defence, but Lewis saved well from Mullen’s low angled shot.

Yet again the Dark Blues lost out narrowly and frustratingly. As has happened so often this season Dundee went down by a single goal. 12 of the 19 defeats have been by only one goal. The Dark Blues couldn’t score when they were on top, and couldn’t keep out the opposition when they came back into the game. For much of this match the Dee were not bad, but in the end they were not quite good enough to take any points home.