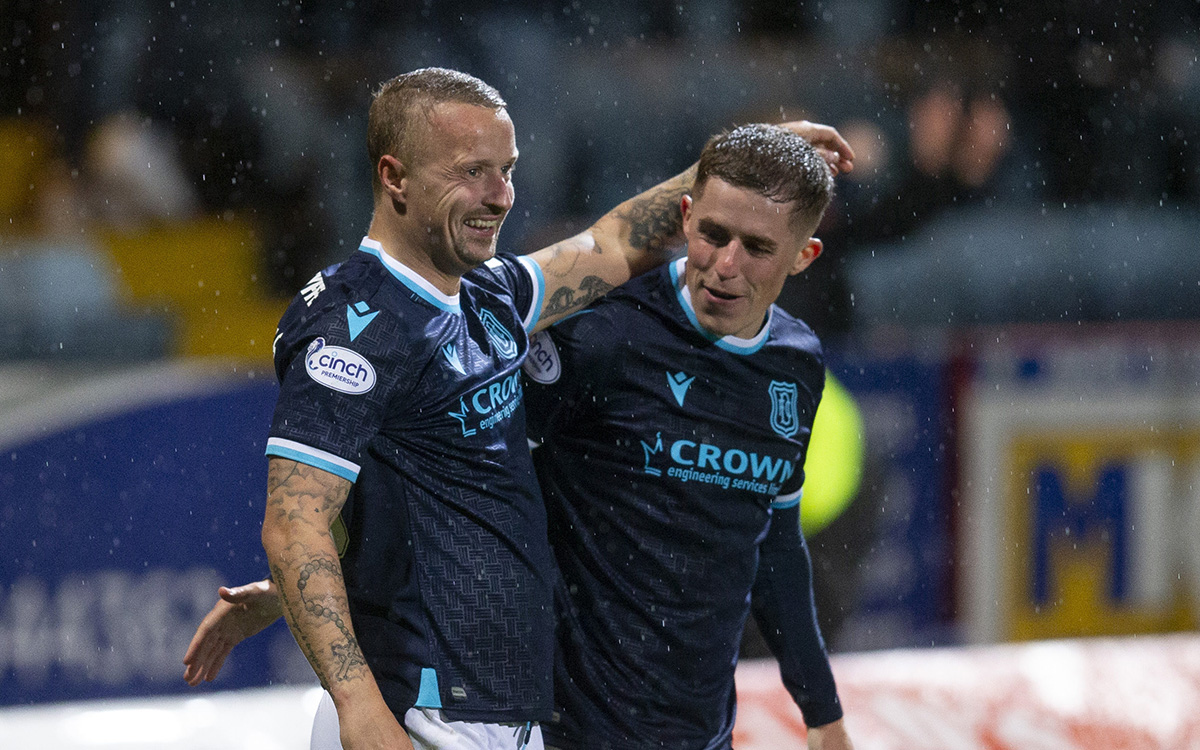 It took 101 minutes tonight but the Dee recorded their first league win of the season, beating Aberdeen 2-1 at the Kilmac Stadium in a game packed with incident. After a goalless first half Leigh Griffiths put the Dee ahead early in the second half. Luke McCowan made it 2-0 after an hour. A quick reply from Christian Ramirez pulled the Dons back into the game but Dundee defended superbly under pressure. There were no fewer than 11 minutes of injury time following injuries to Lee Ashcroft, who was able to keep playing, and Shaun Byrne, who was stretchered off. The Dark Blues managed to keep their composure in a bad tempered finalé to earn a deserved win.

Dundee got off to a fast start, winning their first corner after 30 seconds and getting the first shot on target within a minute. The corner was taken short and Luke McCowan forced a good save by Gary Woods with a rising shot from 20 yards.

Charlie Adam was quickly involved in the action and was at the heart of most of the Dee’s moves. His quick, ambitious and accurate passing brought Dundee’s wide players into the game. That always looked a promising route for Dundee to follow.

However, the Dark Blues couldn’t find the composure and awareness to deliver the right final ball into the penalty area. Dundee’s first half was summed up by a wonderful crossfield free kick by Adam that McCowan controlled instantly. He quickly swapped passes with Jordan McGhee before pulling his low cross into space behind the Dee attackers. The Dee showed vision and skill, but no end product.

The Dons first shot on target came from left back Jack Mackenzie, at the end of a quick attack down the left, but Adam Legzdins saved comfortably.

Aberdeen had more of the ball but couldn’t use it productively. Their attacks repeatedly broke down before they could test Legzdins. Dundee defended with impressive determination, at one point blocking three attempted shots in rapid succession.

The nearest Aberdeen came to scoring in the first half was when Christian Ramirez’s header from a corner was cleared off the line by Leigh Griffiths.

Late in the half McCowan and McGhee worked a clever move, setting up Jordan Marshall on the left but his chip drifted wide.

If Dundee couldn’t find the right final ball and cutting edge in front of goal in the first half they soon put that right after half time. Paul McMullan opened up the Dons defence with a long ball over the top. Leigh GRIFFITHS took the pass in his stride and ran on to shoot through Woods’ legs and celebrate his first goal on returning to Dundee in front of the Bobby Cox Stand.

Aberdeen responded by taking the game to Dundee, but all they could offer was a long distance shot by Lewis Ferguson that Legzdins pushed round the post.

Griffiths required treatment for an injury and was replaced by Cillian Sheridan after 57 minutes. Five minutes later the Dee went further ahead. McCOWAN made space to shoot by working a quick one-two with McGhee on the edge of the Aberdeen penalty area and curled a delightful shot inside Wood’s right hand post to record his first league goal for the Dee.

Aberdeen looked a beaten side, but frustratingly they managed to grab a quick goal that gave them a foothold in the game just as their supporters were turning against them. Jack Mackenzie flighted an excellent curling low cross through the goalmouth in between Legzdins and his central defenders and RAMIREZ arrived beyond the back post to turn the ball over the line from a difficult angle.

Legzdins saved well from a long range shot by Ryan Hedges and an angled effort from substitute Niall McGinn. For the most part, however, Aberdeen collided with a determined Dark Blue brick wall and the Dons started to run out of ideas.

After 71 minutes Danny Mullen came on for McCowan, both players receiving generous appleause from the fans. The game was disrupted by lengthy treatment to Lee Ashcroft who suffered a cut head. He was able to carry on with a bandage around his head. Shaun Byrne was less fortunate and his game ended with a tackle by Declan Gallagher. It was clearly a serious injury and he left the park on a stretcher with Max Anderson replacing him.

The two injuries meant that there were nine minutes of injury time announced. However, a scrappy game degenerated into a shambles as the referee struggled, unsuccessfully, to keep control. There were constant stoppages, bookings, arguments, shoving and petulance as the nine minutes stretched to eleven. Aberdeen had completely lost any momentum and rhythm they might have had and Dundee held on to take the points with the Dundee supporters singing and cheering them over the line.

In many previous league games this season Dundee played well but failed to take their chances. The huge difference tonight was that they took their chances. They had created more in games they lost, but tonight Leigh Griffiths and Luke McCowan delivered what the supporters craved – goals. But a major reason for the victory was a sterling performance by the Dark Blues defence who were resolute under pressure and gave Aberdeen few opportunities. Dundee’s midfield worked tirelessly, and it was sad to see Shaun Byrne’s game end so painfully after a fine performance. Today the forwards could make runs confident that a pass would find them, and that ability to deliver penetrating passes is the priceless asset Charlie Adam brings to the team. How he must have enjoyed his first win in the Premiership as Dundee captain. We all did!