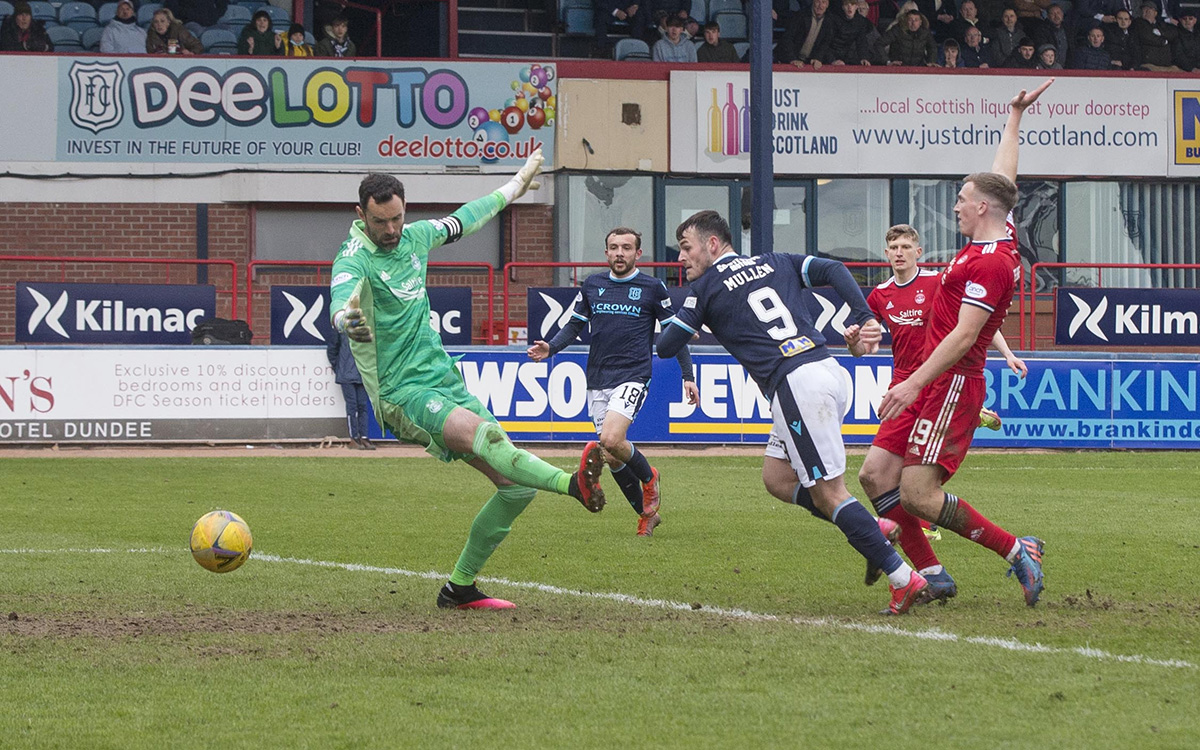 Dundee came from behind twice to take a point from a 2-2 draw at the Kilmac Stadium against Aberdeen. Calvin Ramsay put the Dons ahead late in the first half and Jordan McGhee equalised after an hour. It looked like Aberdeen had scored a late winner from Ross McRorie, but Dundee fought back to save a point with a header from Danny Mullen. Both the Dark Blues’ goals came from Charlie Adam’s free kicks, and the veteran Dee came off the bench.

Dundee’s only change from the team that lost narrowly to Rangers was the return of Danny Mullen, with Declan McDaid moving to the bench.

The game got off to a fast start. The Dee kicked off and went straight onto the attack with Christie Elliott flashing a dangerous low cross across goal after 30 seconds. Dundee regularly played their way into promising positions but could not find the right final ball to set up a worthwhile chance.

The Dark Blues may have been showing encouraging signs in possession, but with less of the ball, Aberdeen created just as much danger. Paul McMullan gave the ball away as the Dee tried to break into attack. Connor McLennan took advantage, advancing into space and hitting a dipping 30 yard shot over Ian Lawlor and off the underside of the crossbar.

Lawlor had to pull off a fine save from David Bates’ header after Lewis Ferguson nodded a deep corner back into the goalmouth.

In response, Dundee themselves went close twice in quick succession. Elliott burst past Jonny Hayes down the right. With Zak Rudden and Danny Mullen waiting for a tap in Declan Gallagher managed to get enough of a touch to divert the cutback behind the two Dees and Mullen could not get enough power in his shot to trouble Joe Lewis.

Mullen then combined well with Jordan Marshall before shaving the crossbar’s paintwork with a rising drive.

The first 20 minutes were frantic, with little composure from either side. As the first half wore on Aberdeen started to exert greater control in midfield and momentum swung their way.

Calvin Ramsay cut in from the right and his 25 yard shot was pushed wide at full stretch by Lawlor. Ferguson screwed the ball back across goal for Christian Ramirez, but his shot was cleared off the line by Cammy Kerr.

Vicente Besuijen caused chaos in the Dee defence with a mazy run into the penalty area. He couldn’t find space for a shot and committed a foul in the resulting scramble in front of goal.

The reprieve was only temporary. With four minutes of the half left Aberdeen worked the ball out to Ramsay on the right. Besuijen ran wide, dragging the covering McGowan with him, allowing RAMSAY to turn infield away from Marshall and hit a low 20 yard shot inside Lawlor’s left hand post.

Dundee had the first chance of the second half. A good move down the right by McGowan, Elliott and Kerr allowed Zak Rudden to shoot from 12 yards but his effort was blocked.

Aberdeen had more possession and were doing more attacking but Dundee were still very much in the game, and threatening on the break.

After 59 minutes Charlie Adam came off the bench, replacing Elliott as the Dee switched to four at the back.

The move paid off immediately. Marshall was fouled on the left, giving Adam the opportunity to deliver a goal-scoring opportunity. He duly whipped a perfect free kick to the far post where Jordan McGHEE won the aerial battle to head home and claim his first goal of the season.

A lively game went up a few notches to furious frenzy. Both teams were working desperately hard with nobody prepared to settle for a draw.

Aberdeen continued to do most of the attacking, regularly getting the ball into the Dee goalmouth but struggling to set up clear chances.

Hayes sent a low cross through the goalmouth and somehow none of his teammates managed to get a touch. Lawlor saved Ferguson’s low drive from 22 yards and had to push an angled shot from Hayes round the post.

After 81 minutes the Dee’s defensive concentration momentarily slipped and it cost a goal. Besuijen went down, unconvincingly, looking for a penalty. It wasn’t given and Dundee cleared. The ball was returned by Hayes and Marley Watkins headed on for Ross McRORIE to take a touch and score with a low shot across Lawlor.

That looked like giving the Dons three points but the Dark Blues were not prepared to lie down. They kept fighting and got their reward five minutes later when Adam was fouled 40 yards from goal.

Adam picked himself up and dinked a delightful free kick into the box for Danny MULLEN to score with a glancing header from eight yards.

The remaining eight minutes of normal time and injury time was a thrilling pulsating affair with both teams going all out for the win. Neither side was able to find the coolness to take advantage of the space that was opening up. Watkins came closest, forcing Lawlor to make a good save with a foot from an angled drive.

The final whistle was an anti-climax when it came as Dundee were preparing to take a free kick. A point apiece was less than both sides wanted but it was a fair outcome to an entertaining match.

The Dark Blues were resilient under pressure and gave everything. Despite some good play, frustratingly, they could not find the composure to finish off promising moves, and the same could be said for Aberdeen.

The result leaves the Dee six points adrift at the bottom, but Dundee did not play today like a team that had lost hope. There was an abundance of spirit, fight and some good football too. The Dark Blues will need all of those qualities in the coming weeks.