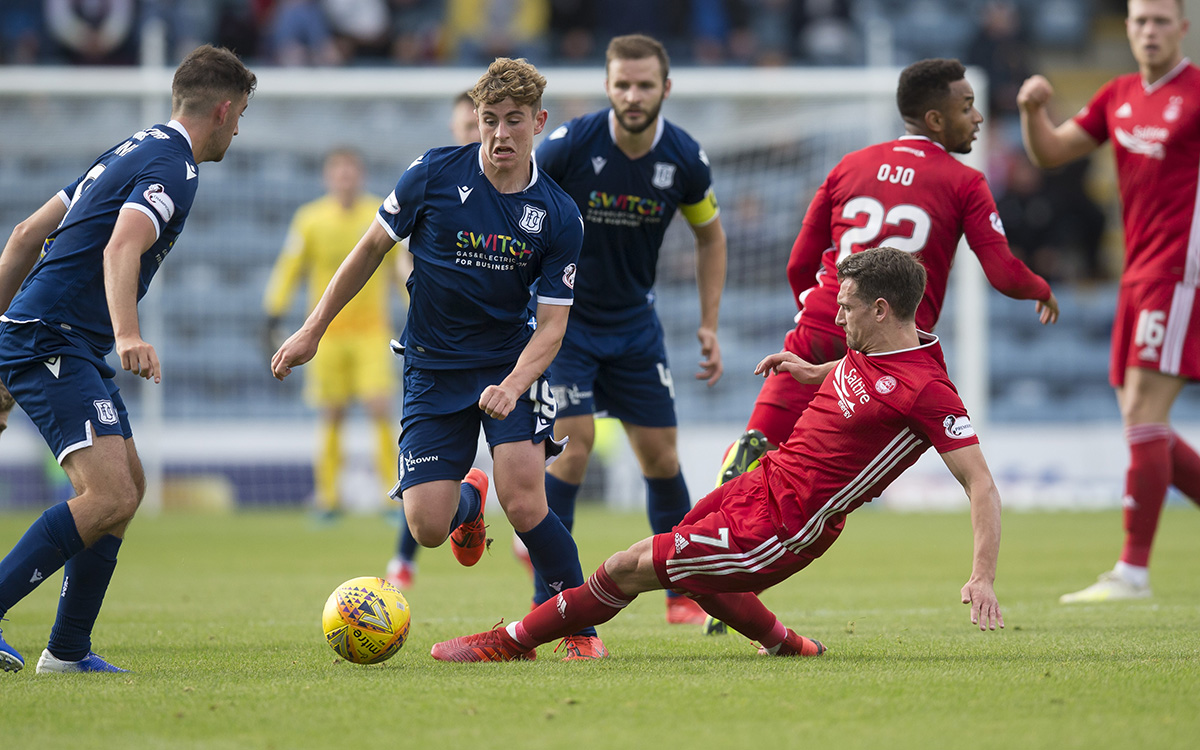 Aberdeen squeaked through to the quarter finals of the Betfred Cup with a 2-1 win over Dundee at the Kilmac Stadium at Dens Park. Danny Johnson’s penalty gave the Dee a deserved half time lead but Aberdeen forced extra time with Andrew Considine’s equaliser at the end of the regulation 90 minutes. Sam Cosgrove put the Dons ahead in the first period of extra time and the Dark Blues couldn’t save the game despite fierce pressure.

Dundee made two changes from the team that beat Ayr. Shaun Byrne and Josh Todd came in for Paul McGowan and the injured Kane Hemmings. Aberdeen’s only change was Craig Bryson replacing Lewis Ferguson.

The Dee were slow to get going and Aberdeen did all the attacking in the first five minutes. After only a minute Niall McGinn’s angled shot was blocked by Jordan McGhee for a corner. However, that was the Dons’ best period in the first half and the Dee grew impressively into the game.

In a good spell of attacking Josh Todd was only narrowly off target with a diving header after Aberdeen’s defence stood watching Declan McDaid’s cross bounce through to the far post.

The Dark Blues went even closer when Dundee’s midfield pressing won the ball and Fin Robertson found Danny Johnson, who spun away from Considine and flashed a low 18 yard shot against the post.

Aberdeen were struggling to get their game going and the away fans were growing restless at the number of aimless passes and general lack of penetration.

Dundee meanwhile were snapping into their challenges and playing the more effective football through the midfield.

Two minutes from half time the Dark Blues took a deserved lead. Jamie Ness hoisted a free kick from the halfway line into the penalty area. The ball was heading for Jordon Forster, but he was pulled down by Considine. Mr Collum pointed to the penalty spot and Danny JOHNSON rifled the kick confidently into the corner of the goal.

Aberdeen had been poor in the first half and did succeed in stepping up their game after the break without impressing the restless away support. Three minutes after the restart Cosgrove stabbed Ryan Hedges’ cross wide in Aberdeen’s first serious effort on goal since the start of the first half.

A delightful flourish of skill and determination by Fin Robertson allowed Shaun Byrne to run into the penalty area only to shoot wide. After releasing the ball Robertson was wiped out by Craig Bryson, who was booked for taking out his frustration on the 16 year old.

Aberdeen had another chance when Jordan McGhee made a great late tackle on Niall McGinn. Jon Gallagher followed up but shot weakly straight at Hamilton.

Midway through the second half Andrew Nelson replaced Danny Johnson, who had run himself into the ground in the lead striker role. The goalscorer left the pitch to a well earned ovation from the home support.

Declan McDaid was causing Shay Logan real problems on the Dee left and the Dons’ defender was very fortunate not to be booked before he eventually picked up a yellow card for scything down Nelson.

Aberdeen had an escape when Considine struck a clearance against Nelson and Joe Lewis had to race from his goal to win a block tackle against the Dee striker, with the ball breaking to safety. McDaid went close with a rasping 22 yarder that was just too high.

After a scrappy spell in which Aberdeen couldn’t put the Dee under sustained pressure the Dons almost broke through after 82 minutes. Connor McLennan’s shot was blocked and the ball sat up nicely for Jon Gallagher to head past Hamilton but a spectacular goalline clearance by Jordon Forster preserved the Dee’s lead.

As the clocking was ticking over into injury time Aberdeen managed to scramble the equaliser they barely deserved. Hamilton pulled off a tremendous save from Greg Leigh’s far post header only for CONSIDINE to bundle the ball over the line in the resulting melee.

The late equaliser boosted Aberdeen, who dominated the first period of extra time. During this spell on top they managed to grab the winner. COSGROVE used his strength to make space on the edge of the six yard box and he headed Leigh’s header back across Hamilton and inside the post.

The Dark Blues spent most of the second 15 minutes of extra time attacking Aberdeen’s packed defence but couldn’t grab the goal they deserved that would have taken the tie to penalties. Paul McGowan, who had come off the bench late in regulation time, couldn’t get enough height on an attempted lob and Lewis managed to grab the ball.

Nelson took a succession of long throws into the goalmouth, one of which triggered a scramble that was ended by Lewis falling onto the ball. Right at the end a corner broke to Marshall but he hooked his shot well over the bar.

For 90 minutes, and much of extra time, the Dark Blues did everything right and made Aberdeen look a poor side for long spells. The team had a good shape that allowed the players to show their ability. The defence stood firm, the midfield was tenacious and played good football, and the Dark Blues created plenty of danger in attack.

After this disappointment the Dee will return to league action next week. On the basis of this performance the fans can feel confident about the prospects for James McPake’s new look team in the long, hard, league season ahead. This might have been a defeat, but the Dundee manager will surely be happier with his team’s performance than his Aberdeen counterpart.