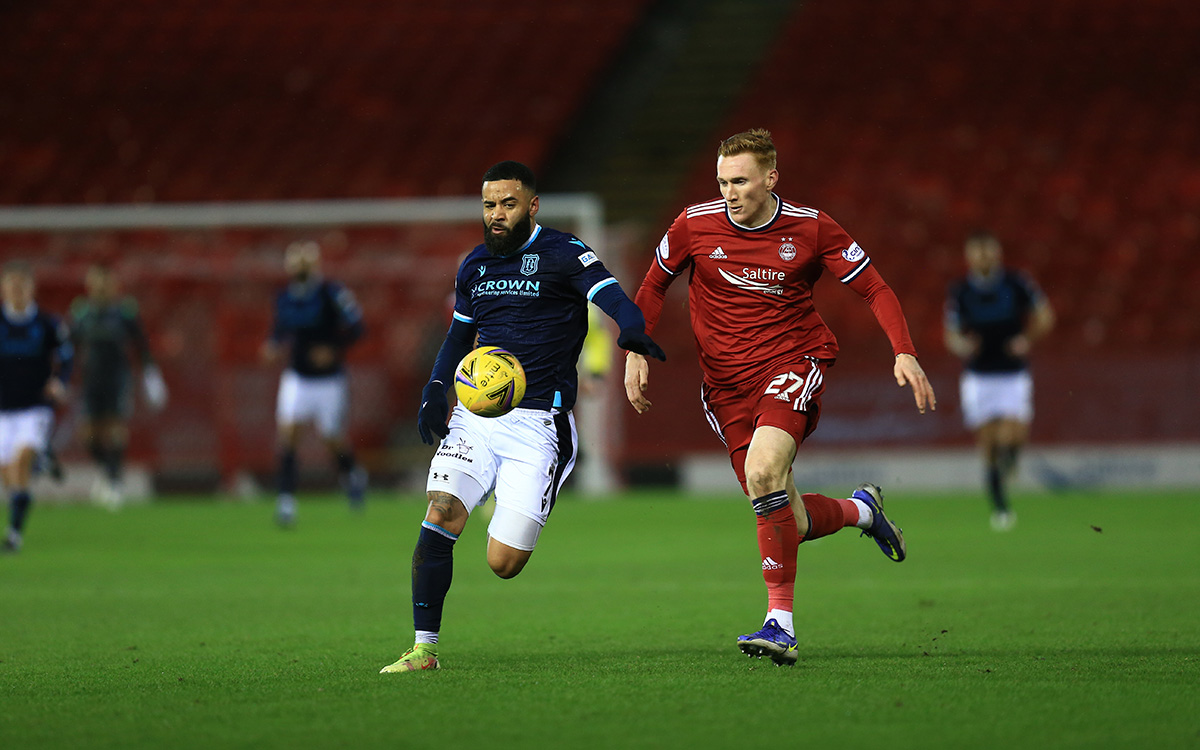 Dundee went down to a 2-1 defeat at Pittodrie this afternoon but there was much more to the story than what happened during the 90 minutes.

A positive case when testing for Covid-19 in the morning led to five close contacts being identified and despite having a squad of only 14 players which included 3 goalkeepers, Dundee’s request for a postponement was denied.

This dramatically altered preparations for the fixture with a team put together in the early afternoon with players who were available. That left a bench of substitute goalkeeper Ian Lawlor, 17-year-old Callum Lamb, goalkeeper Harry Sharp who was listed as an outfield player, and Assistant Manager Dave Mackay who was re-registered as a player as the team traveled to Aberdeen, six years after retiring.

James McPake did manage to put a starting eleven together with Corey Panter making his league debut and Alex Jakubiak starting a match for the first time since September.

Aberdeen got the first effort of the match away when Lewis Ferguson drilled past Adam Legzdins post but it was Dundee who would take an early lead in spectacular fashion.

Leigh Griffiths stepped up to a free-kick from 35 yards and gave Aberdeen keeper Joe Lewis absolutely no chance as he rocketed a strike into the top corner. It was a thing of beauty to give Dundee the lead.

Sadly that lead didn’t last long as the home side, backed by only 500 inside Pittodrie due to government restrictions, hit straight back.

Ryan Hedges combined with Teddy Jenks to work a path through the Dundee defence before forcing the ball beneath Legzdins and bringing Aberdeen level.

The was little in the way of action in the rest of the first period with Hedges shooting over and Jakubiak turning wide the only things of note to happen.

After the break, Hedges again tested Legzdins, this time denied before Fontaine blocked the follow-up from Ramirez.

Outwith that the was very little goalmouth action in the second period as Dundee players gave everything for the cause.

With 20 minutes left on the clock, a goal did come and it was the home side who took the lead.

The ball was played in from the left and Ramirez teed it up for the oncoming Ferguson who fired home.

With a minute remaining on the clock Dundee almost grabbed a deserved point for their endeavor. McGowan played a free-kick forward and when it was touched down Fontaine looked to turn home but Lewis’ presence denied the defender and McLennan turned away from goal with Griffiths waiting.

It was a tough defeat to take for the threadbare squad having put so much into the match. The January break now comes at the right time for James McPake’s men as this time will allow the current covid case to clear and injured players the chance to recover. There is also the matter of the transfer window opening next week which will allow the manager to add to the squad.