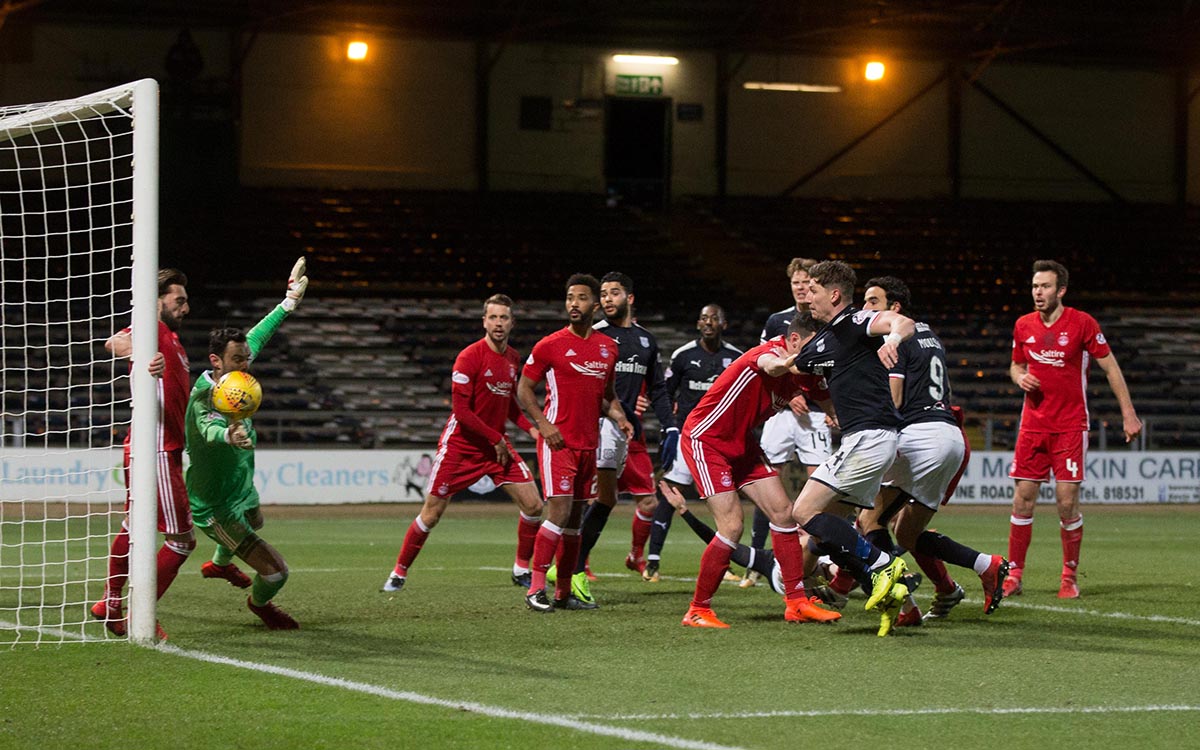 Dundee’s recent good run came to an end as they lost 1-0 to Aberdeen at Dens Park tonight. Scott McKenna scored at the start of the second half to consign the Dee to a narrow and scarcely deserved defeat. The Dark Blues were full of confidence after their recent good run and should have taken at least a point from the match.

Predictably Neil McCann made no changes to the team that played so well and won in Dingwall last Saturday. Aberdeen brought in Ryan Christie and Frank Ross to replace Scott Wright and Stevie May following Sunday’s defeat at home to Rangers.

Both clubs were happy to attack from the start. The Dons’ Graeme Shinnie had the first shot, a low 25 yarder that fizzed past the post. Aberdeen shaded possession in the first half, but Dundee were looking more effective. The Dee’s midfield was moving forward quickly and combining well with the forwards to stretch Aberdeen’s defence.

Dundee should have taken the lead after 14 minutes. Sofien Moussa’s header sent Roarie Deacon clear on goal but Joe Lewis raced out to save the shot with his feet.

The Dark Blues went close twice in quick succession after 30 minutes. A clever, quick turn on the edge of the penalty area gave Roarie Deacon space to shoot but Lewis made a fine save, tipping the shot over the bar. Jon Aurtenetxe’s curling shot was blocked on the goal line by Shinnie after the wing back had played a short corner with Deacon. Aberdeen never reached that level of invention or danger with their many first half corners; the delivery was conistently poor, reguiarly failing to get past the first man.

The Dark Blues had finished the first half on top and they pushed the Dons back at the very start of the second half. It was looking good for Dundee, but it was the Dons who took the lead with a soft and scrappy goal from their first attack after the break. A free kick from the Aberdeen left was cleared only as far as Kenny McLean on the right. He didn’t connect cleanly with his cross, but when both Jack Hendry and Scott McKENNA challenged for the ball it took a deflection to creep inside Parish’s right hand post, with the Dons’ defender getting the credit.

Aberdeen had reorganised their defence at half time, taking off young Frank Ross and sending on Kari Arnason to play in a three man central defence. The change shored up a back line that had looked vulnerable in the first half.

Dundee almost grabbed a quick equaliser, but Sofien Moussa’s powerful downward header from another Aurtenetxe corner was parried by Lewis’s quick reaction save on the goalline. Aurtenetxe went close himself, running onto a fine pass over the top of the defence by Josh Meekings, but he lost his footing and the ball slipped wide.

Shay Logan had chosen to take a booking in the first half rather than let Faissal El Bakhtaoi run away from him, and he was extremely fortunate to stay on the park in the second half. No sooner had Scott Allan arrived on the field, replacing Paul McGowan, than Logan chopped him down from behind. A couple of minutes later he fouled Moussa, and received a lengthy lecture from the referee when most people were expecting to see a red card.

Allan and El Bakhtaoui combined beautifully on the left, but the Frenchman’s cross was poor when there were Dark Blue players running into space in the goalmouth. This was just one of several occasions when Dundee played their way neatly into good positions, then blew the opportunity with a disappointing cross.

Aberdeen started to take the sting out of Dundee’s attacks and began to look increasingly comfortable, sitting on their lead and probing for a second goal. After drifting out of the match Ryan Christie came back strongly and looked the Dons player most dangerous player once more. 10 minutes from time Graeme Shinnie had a huge chance to kill of the Dark Blues when he was sent clear by Greg Stewart. He tried to curl his shot round Parish, but it lacked the power to beat the keeper.

A-Jay Leitch-Smith replaced Roarie Deacon for the last 11 minutes and although the Dark Blues threw everything at Aberdeen they couldn’t break through for the equaliser. Aurtenetxe swapped passes with O’Hara and was clear of the defence, but lifted his shot wide as Lewis closed him down. Cammy Kerr had a fierce shot from 12 yards blocked by O’Connor, and right at the end Scott Allan’s corner was missed by Lewis only for Christie to clear off the line.

A draw would have been the least that the Dark Blues deserved from this game. They matched Aberdeen for nearly all of the match, and were the better side in spells. The defence looked solid and there was much to appreciate from the midfield where Glen Kamara yet again showed impressive skill, composure and awareness. When others are rushed and prone to the odd error Kamara exudes smooth efficiency. Up front Sofien Moussa aerial strength and hold up play were effective in bringing El Bakhtaoui and Deacon into play. Dundee might have lost tonight, but they continued to show most of the qualities that have brought recent improved form. All that was missing tonight was a goal.