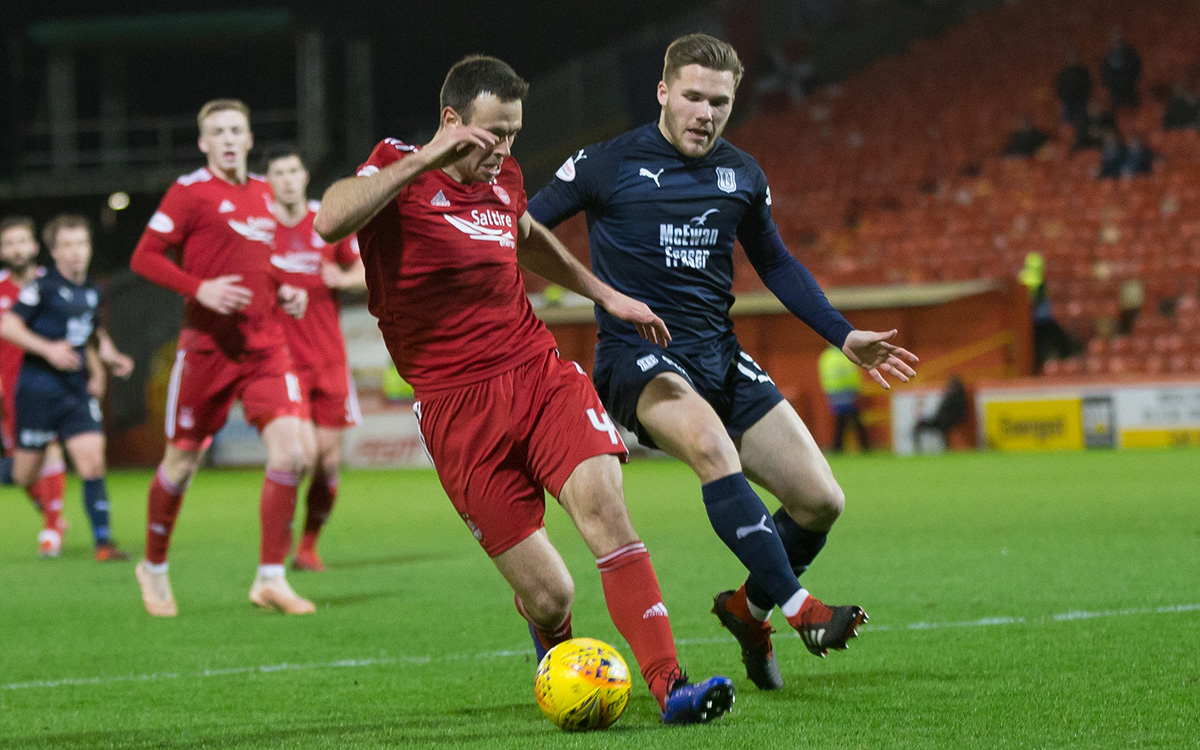 Dundee went down to a heavy 5-1 defeat against Aberdeen at Pittodrie tonight. Sam Cosgrove scored twice before half time and Andy Considine made it three early in the second half. After Connor McLennan made it four, Calvin Miller pulled a goal back for the Dee before Considine completed the scoring with his second of the night.

The Dee made two changes from Saturday’s defeat at Kilmarnock. Nathan Ralph and Lewis Spence came in for Andy Boyle and Glen Kamara, who were both on the bench. The Dons were unchanged after beating St Mirren at the weekend.

Aberdeen got off to a brisk start, quickly putting a sluggish Dundee team under pressure. Cammy Kerr had to react quickly to cut out a dangerous Graeme Shinnie cross at the expense of a corner. When it came over, Kenny Miller cleared Stevie May’s volley from next to the post. Kerr again defended well to block a May shot.

The Dark Blues were slightly fortunate to reach the quarter hour mark before Aberdeen scored, though there was an element of misfortune when the opening goal did arrive. Genseric Kusunga was injured at a Dundee corner, and with the centre back lying in Aberdeen’s penalty area and out of the game the Dons broke quickly to take advantage. May’s initial shot was blocked, but Connor McLennan followed up to cross and Sam COSGROVE scored with a close range diving header.

Kusunga limped off the park after treatment and Andy Boyle replaced him. Aberdeen settled into a long spell of dominance. Lewis Ferguson and Sam Cosgrove both tested Jack Hamilton with powerful shots, but the Dee keeper handled them well.

Hamilton was caught out by a corner that flew over his head beyond the far post where Cosgrove headed back into the goalmouth but no Dons players anticipated the chance and Dundee cleared. Hamilton saved well again from a Shinnie shot as Aberdeen continued to send a stream of good balls into the Dark Blue’s penalty area.

Amongst the Aberdeen pressure Dundee did come close once in the first half. Jesse Curran beat Max Lowe on the right and his low cross flew just in front of Calvin Miller, racing in from the left.

Dundee would have been happy enough to reach the break just the one goal behind, but they conceded a soft second just before the break. Darren O’Dea failed to get enough on a clearing header and Ferguson sent COSGROVE clear on a tight angle and he battered his shot through Hamilton’s legs to score.

The second half was only four minutes old when dreadful defending at a corner gifted Aberdeen goal number three. Two defenders ran into each other, allowing Andy CONSIDINE a free header six yards out and he had no trouble heading past Hamilton. Glen Kamara came on to replace the injured Lewis Spence while Aberdeen were waiting to take the corner.

For the fourth goal it was the match officials’ turn to astonish the crowd with their interpretation of the offside law. Niall McGinnn was well offside chasing a pass down the Dons’ left. With the assistant referee waving his flag he stopped when he reached the ball, but didn’t touch it. Bizarrely the referee waved play on and Stevie May raced up to collect the ball. May then slipped it to McGinn seconds later who ran on and crossed for Connor MCLENNAN to score with a volley at the far post. Martin Woods picked up a yellow card for explaining to the referee exactly how he got it wrong.

Dundee had a reasonable spell in the fifteen minutes that followed. They played some neat football but created only one opening, but that was a beautifully crafted goal. Jesse Curran beat his man skillfully on the half way line to make space and found Paul McGowan who moved the ball on for Calvin MILLER, who checked inside before lashing a low shot inside Lewis’s left hand post from 20 yards – his first goal in senior football.

The Dee’s improved spell was brought to a juddering halt when they again failed to defend a corner competently. The ball broke to Andy CONSIDINE whose volley was saved superbly by Hamilton, but the Dons centre back followed up to head home.

There were moments of bad luck tonight, especially losing Genseric Kusunga so early when his injury meant he could not be in position to defend the opening goal, and also with the peculiar fourth Aberdeen goal. However, Dundee were a long way short of the standard they need to reach and can’t complain about the margin of defeat, which reflected Aberdeen’s dominance. Tonight Dundee were always fragile in defence, passive in midfield, and wasteful in possession when they did get forward. The team will have to do much better than this.