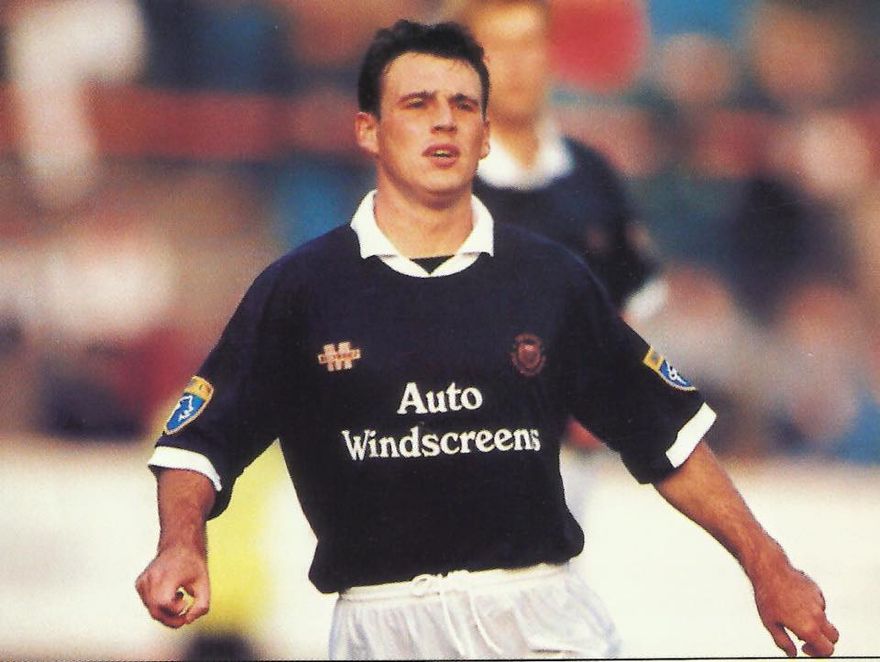 This weekend Dundee travel to Glasgow to take on Partick Thistle in the first post split match so we feature a player to have played for both clubs. We take a look at striker George Shaw had two spells at Firhill and in between times played in a major cup final for the Dark Blues and won the Player of the Year trophy two years in a row; the first Dundee player to do so.

George Shaw was born in Glasgow on February 10th 1969 and started his football career with St Mirren whom he joined in 1987. After four goals in 68 appearances in Paisley, Shaw left Love Street for Partick Thistle in June 1991 when alongside Mark McWalter he was exchanged for Chic Charnley and David Elliot.

George played alongside Jim Duffy at Firhill and when Duffy was later in charge at Dens and was on the lookout for a striker after Billy Dodds had been surprisingly sold to St Johnstone, he brought in his former team mate Shaw and his strike partner Gerry Britton for a combined fee of £250,000.

Dundee were toiling at the wrong end of the Premier Division but after making their debuts at home to Aberdeen on January 11th 1994, Shaw and Britton brought a new impetus to the forward line with their enthusiasm and running power.

Two weeks later Shaw scored his first goal from the spot in a 2-2 home draw with fellow strugglers Raith and by the end of the season had scored eight goals in 21 appearances including a double against Hearts in a 2-0 win at Tynecastle in April.

It wasn’t enough to help save Dundee from relegation however but it was obvious that George Shaw was going to be a key man if Dundee were to bounce back to the top tier at the first time of asking. In the opening game of the 1994/95 season, Shaw scored the Dark Blues’ first goal of the season in a 2-0 home win over St Mirren by the end of the season he would be Dundee’s top scorer with 20 goals.

The First Division was highly competitive league that season with Dunfermline, Raith, St Johnstone and Airdrie all realistically looking to challenge at the start of the season. By November the Shaw and Britton partnership had scored 20 times and Dundee were joint second alongside Airdrie and the pair met in the B&Q Cup Final at McDiarmid Park.

Shaw had scored had played in every game en route to the final and scored in the first round 5-0 win over Arbroath but there was no happy ending as Airdrie lifted the trophy after a 3-2 extra time win.

However The Diamonds’ title challenge fell away in the New Year and it became a three horse race between Dundee, Dunfemline and Raith and there was only three points between them going into the last game. Raith led the way with Dundee and Dunfermline three points behind but with The Pars having a better goal difference than The Dee, the Dark Blues would need one of their Fife rivals to slip up as they faced Stranraer.

Dundee went all out for goals at Stair Park in an attempt to potentially overturn Dunfermline’s seven goal differential and with Shaw on the scoreline The Dee managed to win 5-0. However, Raith got the point they needed in a 0-0 draw at Hamilton to win the title while Dunfermline defeated Clydebank 2-1 at home to secure a play-off spot but there was some consolation for Shaw as he was named as Dundee’s player of the year to win the Andrew De Vries Memorial Trophy.

It meant however a second season in the First Division for Dundee which promised to be tougher than the first with Dundee United coming down and Dunfermline failing to win the Premier Division play-off against Aberdeen.

Jim Duffy had built a good attacking side with Jim Hamilton challenging Britton and Shaw up front and Neil McCann and Paul Tosh on the wings and they started the season well with a 2-0 win over St Johnstone at Perth which Shaw surprisingly started on the bench. He was on the bench as well for the second game, a 6-0 League Cup win over East Stirling at Brockville and it would be the start of a ‘Road to Hampden’ that would take them all the way to the Final.

In the next round Shaw opened the scoring as Dundee knocked out Premier Division Kilmarnock 3-1 at Dens and in the quarter-final, another top flight side Hearts were put to the sword in a pulsating, never-to-be-forgotten match at Dens.

Dundee took the game to the Edinburgh side and a George Shaw double gave Dundee a deserved lead before half time but after the break goals from MacPherson and Colquhoun made it 2-2 with 17 minutes remaining.

However the Dark Blues rolled up their sleeves again and when Shaw pressurised Hearts keeper Henry Smith into mis-kicking across his penalty box, Paul Tosh crashed home a third for Dundee.

With the atmosphere near-electric Hearts threw everything into attack and with just two minutes remaining former Dee Alan Lawrence equalised to take the game into extra-time.

Once again Dundee took the lead with a sensational strike from Morten Weighorst but again Hearts pegged The Dee back when John Robertson made it 4-4 to take the tie into penalties. Tommy McQueen and Neil McCann scored for Dundee before Paul Tosh missed but Hearts keeper Smith also failed to score. Ian Anderson and Jim Duffy took the shoot out to sudden death and when another former Dee Willie Jamieson hit the post, Morten Weighorst sent Smith the wrong way to send Dundee into the last four.

In the semi-final Dundee were fortunate to be paired with fellow First Division side Airdrie while Rangers faced Aberdeen in the other tie and Dundee had the chance to exact revenge on The Diamonds for the B&Q Cup Final defeat at the same venue twelve months before.

Of greater concern was the current financial plight of The Dee and on the eve of the match in Perth, manager Jim Duffy was privately told that had to simply reach the final to survive. With so much at stake on a windy night, the Dark Blues enjoyed over three quarters of the crowd, they started well with a number of chances and eventually broke the deadlock just before the interval when Paul Tosh rammed home a Tommy McQueen cross.

With only seven minutes left Dundee looked like they might be home and dry but they received a stunning blow when Paul Duffield stooped to head home the equaliser. The Diamonds then looked the stronger side and more likely to score but then enter Neil McCann who was about to write himself into Dundee folklore.

With just two minutes remaining George Shaw sent the ball wide to McCann and the 5ft 10in winger sped the ball into the box with everyone expecting a cross. However he lobbed the ball over John Martin’s head before it dipped into the net off the inside of the far post and after a moment’s hesitation, the Dundee fans went wild as they realised what McCann had just done with his audacious effort.

Dundee were in their first final since 1980 but the week before the date at Hampden, Dundee crossed the road to Tannadice to take on Dundee United in the league. With Weighorst pulling the strings in midfield and Paul Tosh superb down the right, Dundee were two ahead at half-time after two quickfire headed goals from Shaw which prompted the famous celebrations between Shaw, McCann and Hamilton who shimmied along on their knees.

Three minutes after the break Weighorst headed a third before goals from Malpas and Brewster made in 3-2 but The Dee held on for a nervy last 20 minutes to record a famous derby win.

It was the ideal preparation for the League Cup Final, now sponsored by Coca-Cola and Dundee headed to Hampden in high spirits. Shaw started the final but it turned into an ultimately frustrating afternoon as Aberdeen, who had defeated Rangers 2-1 in the other semi, cruised to a 2-0 win. Too many Dees did not perform and after taking 10 points from the last four games, it was a desperately disappointing day.

Dundee’s league form suffered in the aftermath as their promotion challenge slipped away and by the end of the season Dundee finished ten points behind the play-off place in fifth. Shaw however maintained a consistent level of performance and became the first Dundee player to win the De Vries trophy two years in a row as he was once again voted player of the year.

The following season Dundee had another good run in the Coca-Cola Cup, this time reaching the semi-final, knocking out Premier Division Dundee United and Aberdeen en route. Shaw played in the third round tie at Tannadice where the Dark Blues progressed 4-2 on penalties after a 2-2 draw and was again up front when they knocked out the holders 2-1 at Dens, gaining some revenge for the previous year’s final defeat to The Dons.

Shaw also started the semi-final 3-1 defeat to Hearts 3-1 at Easter Road but the promotion push again petered out after exiting the Coca-Cola Cup. Shaw had been signing monthly contracts since the summer but after the semi refused to sign any more and his experience would be sorely missed.

John McCormack took over from Duffy when he left for Hibs just after Christmas and he was able to persuade Shaw to re-sign as the club’s best paid player in February until the end of the season. Dundee finished third, two points behind the play-off spot and in the summer Shaw left to sign for Premier Division Dunfermline Athletic.

After three years at East End Park and then a year in Dingwall with Ross County, Shaw joined Partick for a second spell in 2000. After just a year in Maryhill Shaw moved to Clydebank and then had spells with Stranraer, Forfar and Arbroath before dropping out of the Scottish Football League to play for Junior side Shettleston.

Shaw returned to Forfar Athletic in 2006 under manager Ray Farningham, initially serving as his assistant before succeeding him in the role. The team struggled, ultimately finishing bottom of the Second Division although Shaw was sacked in March before the season had ended and he now manages amateur side Kilsyth United.

Shaw was a popular player with both Dundee and Partick and with two goals in a derby win at Tannadice, a major cup final and two player of the year awards on his Dark Blue CV, he is fondly remembered at Dens.