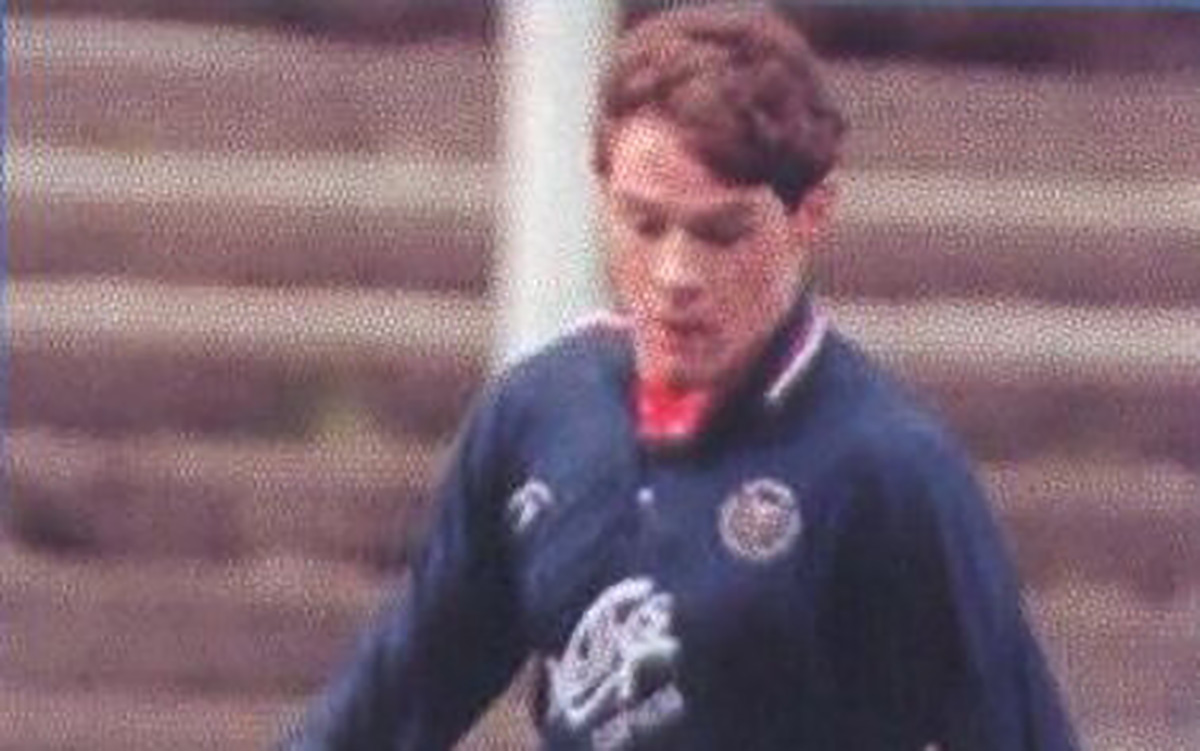 As Dundee face Livingston on Boxing Day, we take a look at a player who played for both clubs, midfielder Grant McMartin who won the First Division with Dundee and the Third Division with Livingston.

McMartin was born in Linlithgow on Hogmanay 1970 and spent his youth career at Dunipace before joining up at Dens Park in 1989. He didn’t have to wait long to make his Dark Blue debut as on January 13th 1990, Grant came off the bench to replace Albert Craig in a 3-0 defeat to Rangers at Ibrox in front of a crowd of 36,993.

With Dundee battling against relegation from the Premier Division, the 19 year old found his first team chances restricted but the week after the drop was confirmed with a 2-1 home defeat to rivals St Mirren in April, McMartin started his first match in a 1-1 draw at Celtic Park

McMartin started the 1-1 draw with Hibernian at Easter Road the week after and in the final game of the season, made his Dens Park debut against St Mirren.

The 1990/91 season saw McMartin become a first team regular as Dundee tried to bounce back to the top tier at the first attempt and made 21 appearances in The Dee’s midfield. He played the last eight games in the run in but ultimately it would be an unsuccessful promotion attempt as the Dark Blues would finish in third, two points behind champions Falkirk and a point behind Airdrieonians who also went up.

Grant scored his first goal for the club in a 2-0 Scottish Cup 4th round win over Kilmarnock at Dens and got his first league goal in a 2-0 home win over Raith Rovers in April.

McMartin scored twice again the following year including the winner in a 1-0 Scottish Cup 3rd round replay win over Stirling Albion, played at McDiarmid Park instead of The Binos’ Annfield due to their plastic pitch not being allowed in the national cup competition.

His league goal also came against Stirling in a 1-1 draw on the artificial surface and Grant made 31 appearances in the 1991/92 season which this time was a successful promotion campaign as the Dark Blues won the 1991/92 First Division title to get back to the top tier at the second attempt.

Simon Stainrod had taken over the Dens Park hot seat in February and in the summer rebuilt the squad in an attempt to retain their Premier Division status. In came nine different nationalities which earned The Dee the nicked “The League of Nations” from the press but it meant for Grant, his first team chances were severely restricted.

He started the first game of the season at home to Falkirk would make just one further appearance in a 3-1 win away at Motherwell in November.

Jim Duffy took over from Stainrod just after the start of the 1993/94 season McMartin still found himself pretty much out of the picture, making 2 starts and coming off the bench twice by Christmas.

With The Dee sitting at the bottom of the table, Duffy looked to refresh his squad and with no cash available he shocked the Dundee support on January 9th by selling Billy Dodds to St Johnstone for £350,000. Duffy also sold Grant McMartin to The Saints for £60,000 and used £250,000 of the money to bring in Gerry Britton and George Shaw from Partick Thistle.

With three clubs going down as the top flight was being reduced from twelve to ten teams, both Dundee and St Johnstone went down and when The Saints finished fifth and failed to get promotion at the first attempt, McMartin was allowed to join Livingston in the summer of 1995 after three goals in 28 league appearances in Perth.

Meadowbank Thistle were relegated from the Second Division at the end of the 1994/95 season and having run into severe financial difficulties were facing closure. The club therefore relocated to a new stadium in the new town of Livingston and changed their name for the second time in their history to Livingston F.C.

Grant was therefore part of the new set up at Almondvale made his Livi debut in the first day of the season away at Montrose in the League Cup and his league debut the following week when Livingston set out their title ambitions with a 3-0 win in Inverness over Caley Thistle.

At the end of the season, Livingston won the Scottish League Third Division title by nine points from Brechin City to give McMartin the second winners’ medal of his career alongside Dundee legend Robert Douglas who was winning his first.

McMartin remained in West Lothian for the next three years making over 100 appearances for The Lions, scoring six times before moving to Stranraer in the summer of 1998. Stranraer were looking to strengthen after winning the Second Division and had piped Livi to the title by two points who missed out on promotion by a point.

Grant spent two years at Stair Park where he scored twice in 36 outings and in July 2000 crossed the border to sign for Berwick Rangers. It would turn out to be Grant’s last season in senior football and hung up his boots at the end of the season after Berwick just missed out on promotion by finishing third in the Second Division.