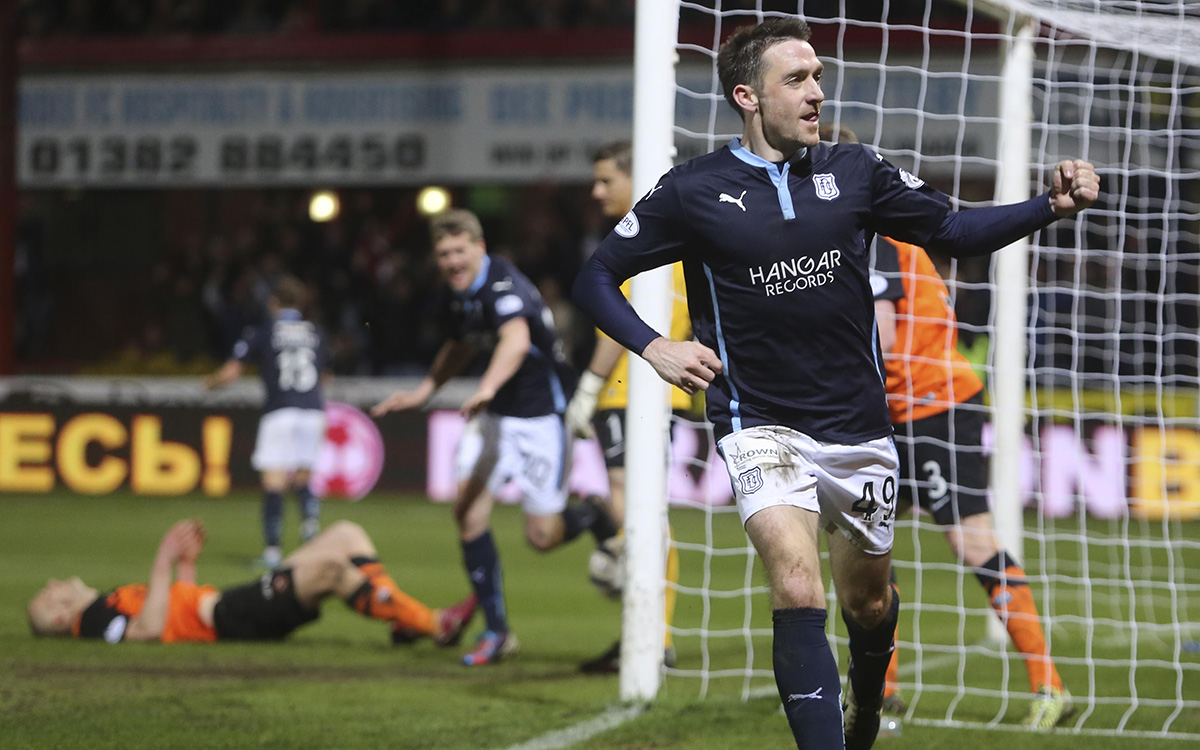 As Dundee host Kilmarnock on Wednesday night we take a look at a player who won the League Cup with Killie and scored a famous derby goal for The Dee, Paul Heffernan.

Paul Heffernan was born in Dublin in December 1981 and after a youth career with Newton, joined Notts County at the age of 18. He made his County debut on Easter Monday 2000 when he came off the bench against Oldham but took a couple of years to become a first team regular.

In season 2002/03 Paul won the Notts County Young Player of the Year after 10 goals in 25 matches and was capped by the Republic of Ireland Under 21s and the following season more than doubled that tally with 21, including the first two hat-tricks of his career.

Despite his goals, The Magpies were relegated and after rejecting a new two and a half year deal, joined Bristol City for a fee of £150,000. However his spell at Ashton Gate lasted just 12 months and in the summer moved to Doncaster Rovers for £125,000, then a club record fee.

The Irishman weighed in with some key goals in his five year spell at Rovers and was part of the Doncaster side which won the Johnstone Paints Trophy against Bristol Rovers in 2007. Paul scored in both legs of the semi against Crewe Alexandra and then scored the second in the 3-2 win in the final at the Millennium Stadium.

In the League Cup Heffernan was also part of the Doncaster side to reach the quarter-finals after they had knocked out both Manchester City and Aston Villa. Paul scored the winning penalty in the shoot out against City and also scored in the 3-0 win over Villa before they succumbed to Arsenal in the quarters on penalties.

In 2008 Doncaster reached the League One play-off final but Paul was to miss the match at Wembley after being sent off in the last minute of the semi-final, first leg against Southend when he headbutted an opponent. Rovers went on to win promotion with a 3-2 win over Leeds but Heffernan was left to rue missing the chance to play at Wembley after the Football League Trophy Final had been in Cardiff.

After a season at Sheffield Wednesday, Heffernan moved north of the border when he joined Kilmarnock in the summer of 2011. Heffernan scored his first two goals for Kilmarnock in a 4–1 home win over Hibernian in August 2011 and his good form continued in the Scottish League Cup third round match against Queen of the South when he scored a hat-trick in a 5–0 win.

Kilmarnock would go all the way to the final and Heffernan played the full ninety minutes as they lifted the cup after a shock 1-0 win over Celtic.

Heffernan would score 27 goals in two years at Rugby Park but left in August 2013 after he fell out with Killie chairman Michael Johnston over an interview. He would join Hibernian on a free transfer scored his first Hibs goal in his first start the following month in a 2-1 win over St Johnstone at McDiarmid Park.

Paul’s first season at Easter Road would end in disaster however when he was part of the Hibs side to lose the Premiership play-off to Hamilton in May and be relegated to the SPFL Championship. Paul did set up a goal for Jason Cummings in the 2-0 first leg win at New Douglas Park but had been substituted by the time Accies pulled it back to 2-2 in the second leg and was therefore unable to take a kick in the unsuccessful penalty shoot out.

Paul remained at Easter Road for their promotion push but after being used mainly as a substitute for the first half of the season was allowed to leave for free in the January transfer window and joined Dundee on February 2nd.

‘The Heff’ made his Dark Blue debut wearing 49 on Valentine’s Day against Partick Thistle at Dens when Paul McGowan scored his first goal for the club in the 90th minute to secure a 1-0 win.

Heffernan came off the bench just once in the next four games in a 1-1 home draw with Aberdeen in March so there were plenty of eyebrows raised on Wednesday 8th May 2015 when he was named in the starting XI for the derby against Dundee United at Dens.

It was however to be Heffernan’s night as he went on to score an iconic Dundee goal in famous 3-1 win which gave The Dee their first home win over the Arabs for 10 years.

The evening started well when on 14 minutes United goalkeeper Radoslaw Cierzniak’s allowed Greg Stewart’s shot to squirm through his legs. That goal was hilariously voted Dundee’s first ever goal of the season at the Player of the Year Dinner but just two minutes later Nadir Ciftci drew United level from the spot.

The Dark Blues were soon back in front when James McPake rose majestically to powerfully head through the palms of the Cierzniak for the first of his two famous derby goals.

It stayed like that until half time but in the second half the 33 year old Irishman’s moment of glory came on 68 minutes to secure the 3-1 win.

Kevin Thomson was pulling the strings in the midfield in his best performance for the club and he picked up a loose ball in the middle of the park and he fed it to Paul Heffernan. ‘The Heff’ turned on the spot, beating three United players in the process and fed a short ball back to the skipper. Thomson slid a perfect ball out left to the impressive Greg Stewart and his first time cross into the six yard box was precise and found Heffernan now lurking at the back post to tap home from four yards.

Heffernan ran towards the South Enclosure with one fist raised towards the United fans in the Bob Shankly Stand before standing in front of the delirious Dees with his arms outstretched.

It was his first and only goal for Dundee but it is a goal that lives long in the memory. It not only finally gave the Dark Blues their first home success over the Arabs in a decade, it virtually assured a top six finish in their first season back in the top flight.

Heffernan played in four of the last seven games of the season and in the summer left Dens Park under freedom of contract and joined Queen of the South. In January he switched Championship sides and joined Dumbarton then in the summer hung up his boots after a career of 139 goals in 471 appearances.