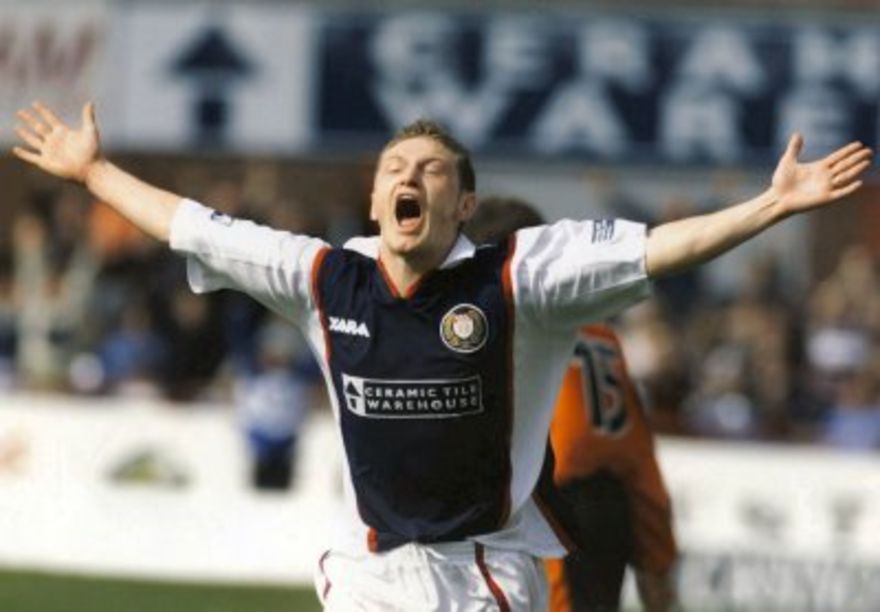 With Dundee recording an historic derby win on Monday and due to play Hamilton tomorrow, we take a look at the career of a player who played for all three clubs, James Grady.

James Grady wrote himself into Dundee F.C. folklore when on Sunday 22nd November 1998 he hit a twenty-five yard wonder strike at Tannadice to give The Dee their first victory over neighbours Dundee United in just over six years. Not content with scoring in a winning derby once, Grady did it again a further twice in his Dark Blue career, to earn himself a permanent place in the hearts of Dundee fans everywhere as well as finishing as top goalscorer in Dundee’s successful promotion campaign in 1997/98.

James Grady was born in Paisley on March 14th 1971 and he started out in Junior football with Barrhead side Arthurlie before turning senior with Clydebank in 1994. After three seasons at Kilbowie, Grady moved to Dens Park when manager John McCormack paid Clydebank £25, 000 for his services, which was a third of the fee Dundee had offered the previous March on transfer deadline day and it soon turned out to be the bargain of the decade.

James was amongst eight debutants to turn out for The Dee on the first day of the 1997/98 season at home to Falkirk and he scored his first goal for the Club in his second league match in a 3-0 win away to Partick Thistle.

Dundee had brought in so many new faces in an effort to win promotion back up to the Premier League at the fourth time of asking and the diminutive striker was an ever present as the Dark Blues were successful in their goal. James played in all forty-four league and cup games on the way to the title and his eighteen goals were enough to see him finish as Dundee’s top scorer and win the S.P.F.A. First Division Player of the Year.

On the way to winning the league, Grady scored two hat-tricks, two braces, scored against Rangers in the Scottish Cup and the scored a penalty the day Dundee received the First Divison trophy and proved himself to be a handful for every defence in the First Division.

Grady and his strike partner Eddie Annand had scored thirty-two goals between them to shoot The Dee into the inaugural S.P.L. but in the summer Jocky Scott, who had taken over from ‘Cowboy’ McCormack in March, decided to bring in Tommy Coyne and Willie Falconer to challenge for the striking positions. It meant therefore that they started together just three times in the S.P.L. but it mattered not as Dundee finished fifth, their highest league position for twenty-five years.

The undoubted highlights of Dundee’s triumphant return to the top tier were the two derbies at Tannadice and ‘Jamesie’ Grady would emerge as a hero in both.

Grady started the first derby of the season at Dens in September when Dundee came back from 2-0 down to rescue a point in the final minute thanks to Darius Adamczuk. It left The Arabs with a sense of injustice and when Dundee made the shortest walk in football in November, United came out fast from the traps and had a goal wrongly disallowed for offside after twelve minutes.

It was all one way traffic towards the Dundee goal for long periods of the game and it took some inspired defending to keep United out. The turning point came with about twenty minutes remaining when Grady, who had missed the last seven games through injury came off the bench to replace Tommy Coyne and with just eight minutes remaining, the 5ft 7in forward ran onto to an Eddie Annand head flick and volleyed a spectacular thirty yarder (it gets further out every time the tale is told) into the top of the net.

Robert Douglas had to make some heroic saves towards the end but to the delight of the Dark Blue fans, Dundee held on in front of the BSKYB cameras for their first Derby success since September 1992.

It was a wonderful winner from Grady and without doubt one of the greatest and most famous goals ever scored in the Club’s history and the ball from that fantastic evening now resides in the Dens Park boardroom. Beating United on their own patch showed Scottish football that Dundee were back and the phenomenal strike from Grady against Dundee’s greatest rivals was the best possible way to emphasis this.

By the end of the season, Dundee had achieved their highest placing since winning the Scottish League title in 1962 but of more importance to many Dundee supporters was the fact that Dundee had finished above United for the first time since 1973/74.

The match that this joyous fact was confirmed was ironically at Tannadice with four games to go when a 2-0 win also gave Dundee their first ever double league victory over United away from home.

Over 11, 000 fans turned out on a gloriously sunny May Day and to the delight of their fans, the Dark Blues almost dominated proceedings. Time and again The Dee tore United apart but the breakthrough didn’t come until the sixty-seventh minute when Brian Irvine rose high to power home a header from a Hugh Robertson corner.

Grady was again on the bench and he got his chance when Eddie Annand limped off after a shocking foul from United’s Northern Ireland defender Darren Patterson, who was shown a red card for the challenge. With full time looming, Grady ran on to a defence splitting pass from Steven Boyack and fired a shot in on goal which after clipping off the United keeper’s heel, rolled slowly into the net, to send the Dundee support behind the goal wild.

The following season, Grady did it again against The Arabs in the final derby of the season which this time was at Dens. Having failed to beat United at home since Keith Wright scored a hat-trick in 1989, Dundee were keen to lay that hoodoo to rest and did it in style with a comprehensive 3-0 win.

Grady was once again on the bench and this derby would be long be remembered for Javier Artero’s astonishing display in front of the South Enclosure, with his powerful running causing United all sorts of problems. Grady came on at half time for the injured Spaniard Paco Luna and after four minutes played a superb one-two with Artero who crossed for Willie Falconer to head home.

Fifteen minutes later Dundee doubled their lead after fine link up play between Gavin Rae and Steven Boyack left the latter in acres of space in the United penalty box. Boyack wasted no time picking out Grady, the smallest man on the park, who flashed a pinpoint header past the hapless Alan Combe to give Dundee a 2-0 advantage.

Dundee made it three when Grady unselfishly headed across the goal for Willie Falconer to nod in his second and his contribution after coming on at the interval was a key factor in Dundee’s biggest Dens derby success since 1973.

Dundee again finished above Dundee United for the second year in succession but at the end of the season, Dundee dispensed with the services of Jocky Scott and it spelt the end of Grady’s Dundee career when the new Italian management team wanted to bring in their own players. There were many Dundee fans however, who felt that Grady had been released far too quickly and could have done a job under the Bonetti regime.

Grady left in the summer to join Ayr United and had spells with Dundee United, Gretna, Hamilton and Morton where he was caretaker manager for the 2009/10 season.

Grady’s tenacious running, never say die spirit and eye for goal made him a firm favourite on the Dens Park terracing and they were often heard to sing ‘The James Grady Macarena’. ‘He’s five foot two and his name is Jamesie Grady, He gets the ball and he goes on a mazy…….’; well, you know the rest about a man who goals against the Arabs will always be remembered and made James Grady a true Dundee legend.

His goal against United was inducted into the 2015 Dundee FC Hall of Fame with a Modern Moment Award and when he went on stage to accept it he proclaimed, “Forgive me Derry, for I am sinned” in reference for joining United and he needn’t worry because we do!