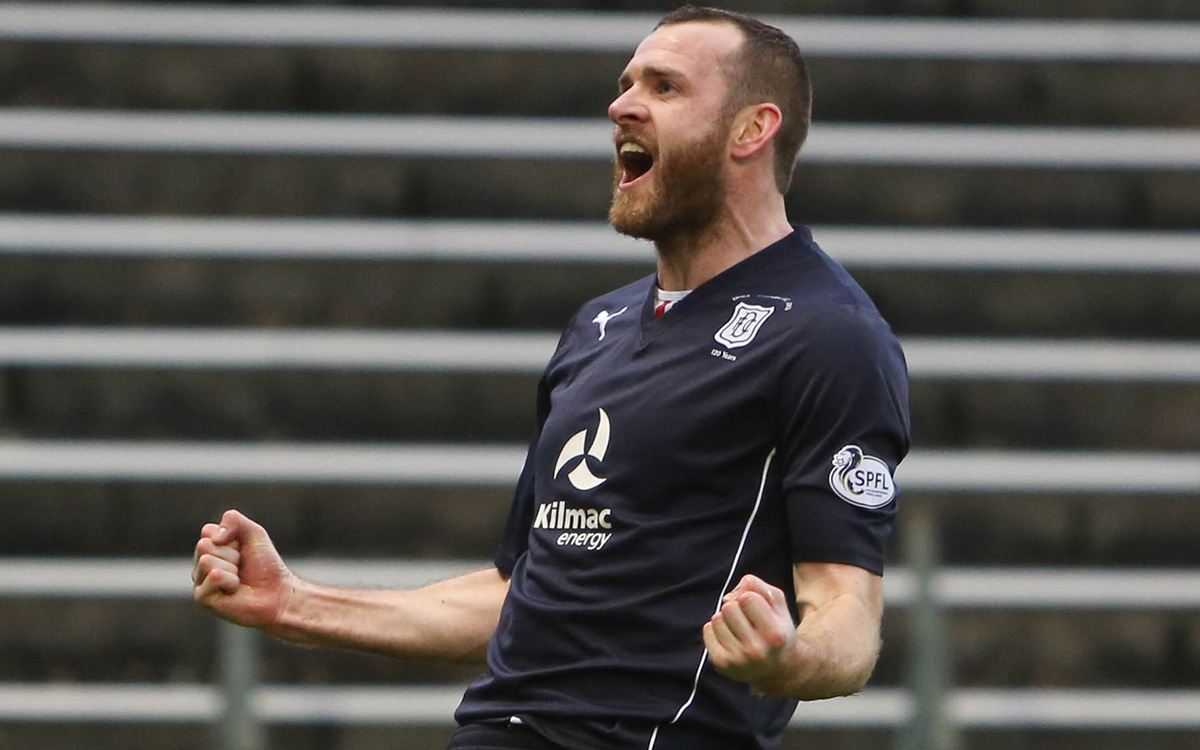 As Dundee host Celtic on St Patrick’s Day, we take a look at an international striker who won league titles with both clubs, Craig Beattie.

Beattie was born in Glasgow in January 1984 and trained with Hearts at Under 12 level before starting his career as a schoolboy with Rangers. After being released by manager Dick Advocaat, he joined Celtic and would go on to win three SPL titles and two Scottish Cups with The Hoops.

During a Celtic under-19 pre-season friendly against Irish side Derry City, Beattie scored all six goals in a 6–0 win and went on to make his senior debut aged 19 in August 2003, as a substitute in a UEFA Champions League qualifying round 1–0 victory against FBK Kaunas.

He made his league debut later that month in a 5-0 home win over Dundee United and in his first season made 17 appearances, including starting the UEFA Cup match against Barcelona.

Beattie’s first goal for The Bhoys was in a 2-0 win at Partick in December and by the end of the season picked up his first winners medals when Celtic won the SPL title, finishing 17 points ahead of Rangers and defeated Dunfermline in the Scottish Cup Final.

After scoring four goals near the end of the 2004/05 season Craig was awarded a new three-year contract in July and he started the following  season by becoming the first Scot since Gerry Creaney to score in three consecutive games for Celtic. He would also make his full Scotland international debut as a 76th minute substitute in a draw against Italy in September and in all was capped seven times between 2005 and 2007, scoring once; a last minute winner against Georgia in a European Championship qualifier.

By the end of the season he had netted seven goals in 17 appearances to help pick up his second SPL winners medal and the following year picked up his second double as Celtic again won the SPL and Scottish Cup.

That would turn out to be Craig’s last season at Celtic Park as in July 2007 he joined English Championship side West Bromwich Albion for a fee of £1.25 million with an added £500,000 depending on performance-related add-ons.

He made an immediate impact for The Baggies when he scored his first hat-trick in a friendly against Dutch side SC Heerenveen before making his competitive Albion debut in a 2–1 defeat away at Burnley on the opening day of the season. Three days later he scored his first competitive goal for the club as West Brom beat Bournemouth 1–0 in the League Cup and in his debut season he made 26 appearances scoring four times before going on loan to Preston in March 2008.

On his return to West Brom Craig made his Premier League debut on August 16th 2008 against Arsenal as a substitute. West Brom manager Tony Mowbray stated that he would not stand in Beattie’s way should he seek a move away from the Hawthorns and after just three appearances he was sent out on loan to Crystal Palace. On his return Beattie scored his first Premier League goal in December 2008 against Spurs but his return was brief and he was sent out on loan again to Sheffield United.

His final game for West Brom came in August 2009 in the League Cup when he scored twice in their 4–3 win over Rotherham as at the end of the month Beattie joined Swansea City as a replacement for departed striker Jason Scotland for an £800,000 fee.

Over the next three years at the Liberty Stadium Beattie scored seven times in 46 appearances and in October 2011 was sent on loan to Watford to gain match time after recovering from an ankle injury.

After his return Swansea announced in January 2012 that Beattie had been released from his contract by mutual consent and joined Hearts until the end of the season. Over the next four months Craig would write himself into Gorgie folklore, starting with scoring against Hibernian in only his second league match. Then in the Scottish Cup semi final against Celtic in April, Craig would set up the first and score the winner in a 2-1 win and came off the bench in the final in the 5-1 victory over Hibs at Hampden.

In his short spell at Tynecastle Craig had became a fans favourite and The Jambos offered him a new deal on lesser terms but he turned this down. Upon leaving Hearts, Beattie had trial spells at South African side Bidvest Wits and Scottish Third Division side Rangers who offered him a contract but the deal fell through and he joined St Johnstone.

However his spell in Perth ended in January after just four substitute appearances and after leaving McDiarmid by mutual consent, signed for English League Two side until the end of the season.

In the summer Beattie had trials with Alloa and Partick but in September he was signed for SPFL Championship side Dundee by manager John Brown as The Dee looked to bounce back to the top flight at the first attempt.

Three days after joining the club, Beattie made his debut in a 0–0 draw with Hamilton Academical at Dens and at the end of the month scored his first Dark Blue goal in a 3–1 win over Greenock Morton. After making a good start, with another two goals against Cowdenbeath and Queen of the South Craig sustained a knee injury. His goal at Central Park was a sensational 40 yard lob and it looked like he would be key in Dundee’s promotion push but after an operation in December, it was announced that he would be out for three months.

When he returned to action in March, Dundee had a new manager in Paul Hartley who told the press that he thought Craig would have a big role to play and he was right. He made his first appearance since injury, coming on as a substitute, in a 1–0 win over Dumbarton at the end of March and played in crucial games against promotion rivals Falkirk and Hamilton. He would turn out seven times in the title run in and scored in the pivotal a 3–0 win over Alloa in the penultimate game of the season.

The following week Beattie came off the bench on ‘Helicopter Saturday’ as the Dark Blues defeated Dumbarton 2-1 on a nervy afternoon at Dens to win the SPFL Championship title and promotion to back to the top flight.

It would turn out to be Craig’s last game for The Dee as Hartley looked to rebuild his squad for the Premiership and in August signed for Maltese Premier League side Żebbuġ Rangers.

At the beginning of September, after less than two weeks in Malta, Beattie signed for Scottish League One club, Ayr United and stayed at Somerset Park until the end of the  season.

His next stop was at recently relegated League Two club Stirling Albion and made 23 appearances, scoring six times at Forthbank

Shortly after leaving Edinburgh, Craig signed for Elgin City and is currently without a club after leaving Borough Briggs in January.