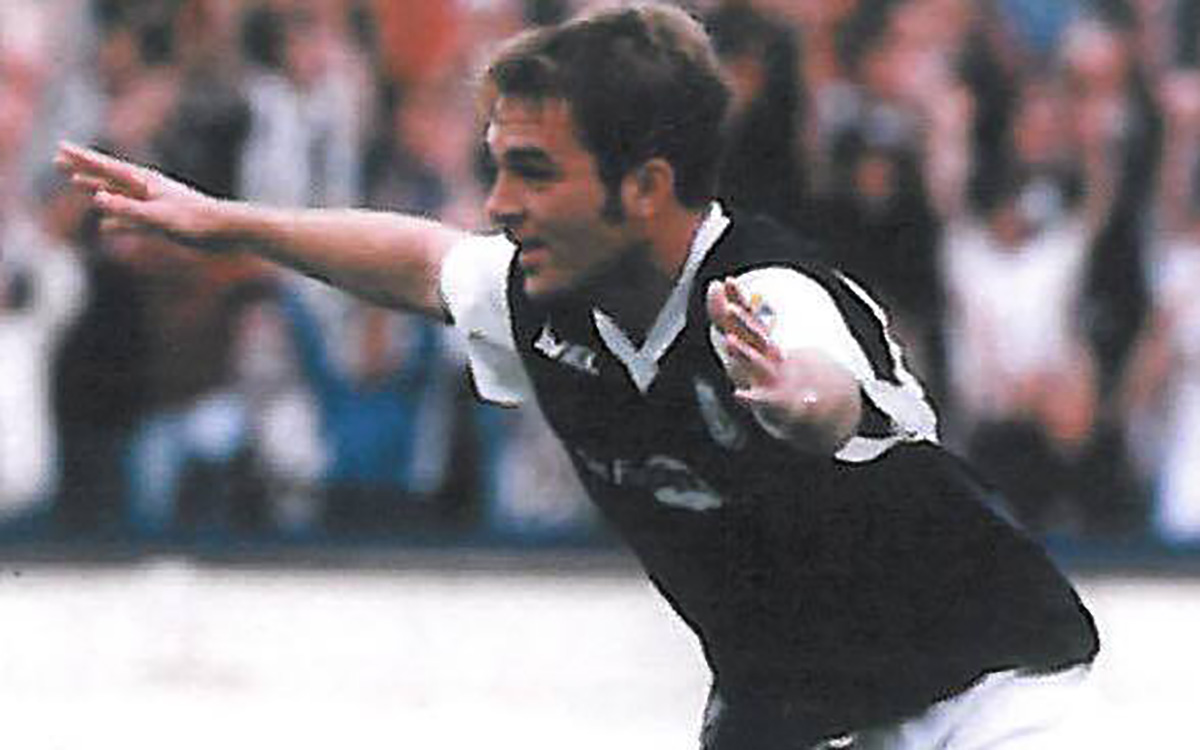 Before the postponement of the season we were due to host Angus neighbours Arbroath this evening, tonight we take a look at a player who has played for both clubs, striker Jerry O’Driscoll.

O’Driscoll was a product of Dundee’s youth system which around that time produced a terrific array of talent such as Neil McCann, Iain Anderson, Jim Hamilton, Gavin Rae and his friend and fellow Aberdonian Jerry O’Driscoll.

Jerry signed for Dundee from Dyce Boys’ Club before being farmed back to the Aberdeen side for a one year YTS, then a second year at the now defunct Crombie Juniors and was recalled back to work with the first team squad at Dens midway through that second year.

He got a chance to make an immediate impression when he made his debut in a League Challenge Cup second round tie against Cowdenbeath at Dens when he came off the bench to replace George Shaw on September 11th 1995 and towards the end of the season made another four substitute appearances, scoring his first goal in a 1-1 home draw Dunfermline on April 13th before getting his first start in the final game of the season against St Johnstone at Dens three weeks later.

By then Dundee were way off the promotion pace in the First Division, eventually finishing fifth and a form slump in the aftermath of the Coca-Cola Cup Final and the cost of two seasons in the second tier began to take its toll with stars like Morten Weighorst having already left and the likes of Neil McCann and Jim Hamilton not far behind..

For Jerry however, this meant the chance of some more first team football and it was the sale of Scotland Under-21 striker Jim Hamilton to Hearts in December which allowed O’Driscoll to get a continuous run in the side.

Before that however, he went out on loan to Portadown with Andy Cargill but after just four games in Northern Ireland they were recalled to Dundee for their own safety by manager Jim Duffy after a game between Portadown and Cliftonville was called off due to sectarian rioting.

It coincided however with a spell when The Dee scored no goals in six league games and in his first game back with the Club on December 3rd, he scored to give Dundee a 2-1 half-time lead against East Fife at Bayview before the match was abandoned at the interval due to floodlight failure in the appalling gale-force conditions, much to the dismay of the 367 fans in attendance.

In his next start eleven days however, Jerry score his ‘official’ second goal for The Dee in a 1-1 draw with Stirling Albion at Dens and three days later he was on the scoresheet again in the rearranged game in Methil as Dundee trounced The Fifers 7-1.

East Fife must have been sick of the sight of Dundee as a week and a half later Dundee this time beat them 6-0 at home with Jerry getting a double alongside new strike partner Lee Power who also scored a brace after joining on a free from Peterborough in order to slash their wage bill. The stronger and more experienced Power brought out the best in the eager O’Driscoll and the new striking partnership showed great promise.

It was the last game that Jerry was to play for Jim Duffy however as two days later he would resign his post at Dens to take up the manager’s job at Hibs and was replaced in the Dundee hotseat by his assistant John ‘Cowboy’ McCormack.

Cowboy’s first game in charge was a Ne’erday Tayside derby in Perth but it was a miserable day for The Dee as St Johnstone ran out 7-2 winners. Jerry scored a scant consolation from the penalty spot but it gave him five goals in four games to help cement his place in the side.

He continued his good run of form with goals in each of his next four games to give the 6ft forward nine goals in eight games and a delighted McCormack was fulsome in his praise of the youngster. O’Driscoll knew his new boss well as McCormack had coached Dundee’s youth side to the BP Youth Cup Final against Celtic the previous year and Jerry, after being a key player in the in the cup run, was part of the team which went down 4-1 at Hampden.

Now he was performing well for ‘Cowboy’ in the senior side and McCormack had to rebuff a £300,000 bid from St Johnstone for the striker before persuading him to sign a new two year deal along with Barry Smith.

By the end of the season, Jerry had established himself as a fans’ favourite, scoring a spectacular thirty yarder against Morton in February and finished the season as top scorer with eleven goals in eighteen games which included a goal in the 4-2 win over Stirling at Dens in the last game of the season.

O’Driscoll’s good run of form was rewarded with some international recognition when he was selected to play for the Republic of Ireland Under-20s and the Scots-born forward, who qualified for Eire through family ties, impressed in a friendly against Belgium. The match against the Belgians was a warm up game for Ireland’s participation in the World Youth Cup in Malaysia that summer but in the next warm up game against Cork City, Jerry sustained a shin injury and was forced to withdraw from the glamour trip.

It was a huge disappointment for Dundee’s most exciting prospect who was forced to sit at home as the Republic finished a very credible third and it was a injury which some at Dens thought O’Driscoll never fully recovered from.

That same summer also saw new owners at Dens when Peter and Jimmy Marr took over from Canadian Ron Dixon and investment in the squad meant O’Driscoll faced stiff competition for a starting slot from new strikers James Grady and Eddie Annand. He started the season well however with goals in the first two games against Falkirk in the league and against East Stirling in the League Cup but when the side drew a blank in the third match with a 1-0 defeat away to Airdrie in the Challenge Cup, Jerry dropped to the bench for the next match at Partick where he stayed for the rest of the season.

He would come off the bench thirteen times as Dundee went on to win the Scottish First Division and he found it even harder to get into the side when 6ft 4in striker Steve McCormick joined in January.

Before the end of the promotion season, Jocky Scott had replaced John McCormack as manager and in the summer, Scott brought in two strikers of his own in the shape of Tommy Coyne and Willie Falconer. Jerry therefore had to watch from the stands for the first two games of the inaugural SPL season but came off the bench for the third game in a 2-0 defeat away to Dunfermline.

That game at East End Park was to prove to be his last game for Dundee as O’Driscoll went on loan first to Arbroath, where he played four games and then to Montrose for the rest of the campaign and at the end of the season joined the Gable Endies permanently having been granted a free transfer.

After a year at Links Park, O’Driscoll moved to Glentanar Juniors for two and a half years before playing Highland League sides Huntly, Keith and Cove Rangers over the next eight years and Jerry’s three year spell at Cove Rangers saw him managing the Allan Park side for eighteen months. He then had a short stay at Strathspey Thistle to get his fitness up before joining Turriff United at the start of the 2011/12 season where he lined up against his old side Dundee in The Dark Blues’ first pre season friendly which The Dee won 3-0.

O’Driscoll built himself a solid reputation as the kind of striker who leads the line well and although having a fair haul of goals over the years was known as the type of player never to waste a ball. His strengths were in holding up the ball and distributing it cannily in and around the box with a repertoire of dinks, head flicks and well judged short passes.

He was and is a shrewd reader of the game and has considerable tactical wisdom to impart. Jerry is now an experienced coach in the Highland League with management roles Cove Rangers, Keith and Formartine United.where. Jerry played in all 4 tiers in senior Scottish Football and is one of a small group to have won Highland League titles with 3 clubs, scoring in excess of 140 Highland League goals along the way.

O’Driscoll was a popular player at Dens, showing great promise that was unfortunately never really fulfilled but he proved himself to be a predatory striker with an eye for goal and a touch of skill who is fondly remembered amongst Dundee’s Dark Blue Destroyers.