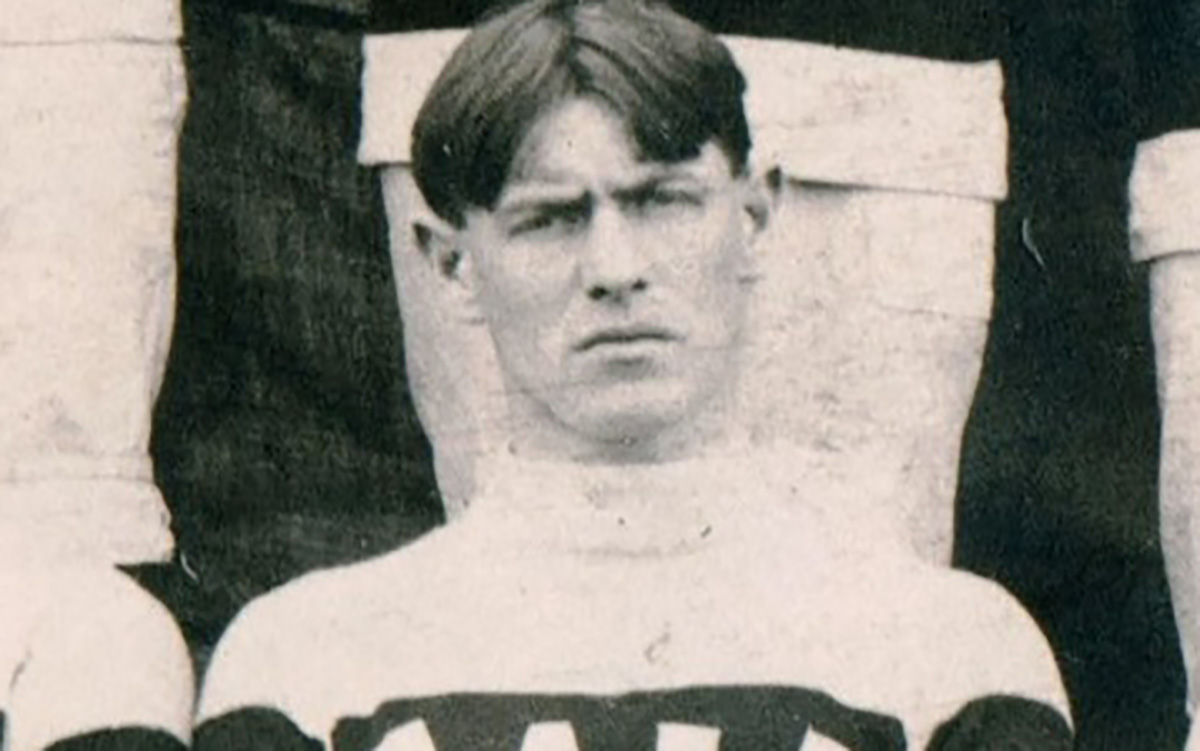 Dundee travel to Lanarkshire on Saturday to take on Motherwell in the Ladbrokes Premiership and so we take a look at a player who played for both clubs, Sandy Hall. Hall was a member of Dundee’s 1910 Scottish Cup winning squad and turned out for Canada in the 1904 Olympics despite being born in the north-east of Scotland and incredibly won a gold medal in the football tournament.

As the first Scots-born Olympic gold medallist, Sandy Hall has outstanding credentials to be a national sporting icon. Yet this prolific goalscorer from Peterhead remains unheralded in his native land – because his greatest achievement came with a Canadian team.

The son of a whale fisherman, Alexander Noble Hall was born in Aberdeen on December 3rd 1880 and despite brought up near Peterhead harbour, he spurned the sea to earn his living by cutting granite. The hard physical work kept him fit and he played centre forward for his home town team, but there were few signs of the glory to come with an Aberdeenshire Cup final for the Blue Toon against Victoria United at Pittodrie in 1900 being a rare highlight.

That would all change when the young man travelled to Canada in 1901 in search of adventure, picking up work on construction projects. After a couple of years his stonecutting took him to Galt, west of Toronto, a small nondescript town which just happened to have the top football team in Ontario. With the added ingredient of Hall’s goals, the Galt XI would achieve an extraordinary triumph; Olympic gold.

The 1904 Olympiad in St Louis, USA was the first where medals were awarded in association football, the winners recognised by the International Olympic Committee even though the competition was limited to just three teams from two countries. Galt defeated the University of Toronto for the right to represent Canada before heading south to Missouri in exuberant fashion on the Grand Trunk Railway. They were backed by 50 supporters, including the town’s mayor, who paid $10.70 each for the round trip on a special train decked in red and white.

Hall, the only non-Canadian in the eleven, scored a hat-trick in the opening match on November 16th, as Galt thrashed the US team Christian Brothers College 7-0; the following day they defeated the other American team St Rose Parish 4-0. Without conceding a goal against these two local sides, the Galt players were duly declared Olympic football champions and trooped off to the Department of Physical Culture to be presented with their gold medals. One of those precious prizes, won by fellow forward Fred Steep, is now on show at the Canadian Soccer Hall of Fame in which Dundee’s 1950s left-back Jack Cowan is an inductee.

Until then, the only athlete with Scottish connections to have won an Olympic title was strongman Launceston Elliot in 1896, but he was born in India and brought up in England. Sandy Hall thus became Scotland’s first home-grown Olympic winner, and to this day remains our only footballer as the Great Britain gold medal teams of 1908 and 1912 were all English.

Yet when Hall returned home a year later, his Olympian status counted for little, and after a trial with Aberdeen reserves he was picked up again by Peterhead in local amateur football. There the story might have ended but he was spotted by Edinburgh side St Bernard’s, who liked his direct bustling style, and they offered the striker the chance to play professionally. He made a sensational start to his senior career at the age of 25, scoring a hat-trick against Dumbarton, and his goals in 1906/07 were a major factor in Saints winning the Scottish League Second Division championship.

This scoring prowess brought him to the notice of bigger clubs, and there was none bigger than Newcastle United, who had just clinched the English First Division title. They paid £200 to take him to Tyneside in 1907, and again he made an immediate impression with ten goals in three end-of-season tour games in Germany. When it came to the rigours of the Football League however he made little headway and played just six times, scoring twice and United were happy to sell him to Dundee well before the season was out.

Again he made an immediate impact at a new club, netting a double in a Scottish Cup replay against Aberdeen on his debut at Dens on February 15th and scoring again in the second replay at neutral Ibrox the following week.

However Sandy was used only sparingly as cover at Dens for Dundee’s established forward line, and had to be content with banging in the goals for the reserves. His chance to shine eventually came in the 1909/10 season with an extended run at centre forward, replacing first the ageing John ‘Sailor’ Hunter then George Langlands.

It gave Hall the chance to create a little bit of history as he scored a double in a 2-1 Forfarshire Cup 1st round tie at Tannadice on February 19th against the newly founded Dundee Hibernian in the first ever Dundee derby match between the clubs.

The following week Sandy scored a hat-trick that saw off Motherwell in the Scottish Cup quarter-final; but after failing to find the net in the semi he was dropped for the final, cruelly missing out on Dundee’s epic cup victory over Clyde. He played his part nonetheless, as a fixture backlog forced Dundee to play 12 games in April, and he turned out in several league matches to keep the stars fresh for the final. Hall scored in a 1-1 league match with Partick before the final with Clyde and then a double in a 4-2 win over Hibs in a league match before the first replay but there was no place in the team for the second replay which The Dee won 2-1 and therefore no medal, but his role as understudy was acknowledged with a place in the cup-winning squad photo, sitting next to the cup winning goalscorer ‘Sailor’ Hunter, having played five matches in the successful cup run.

No sooner had the season ended than he was off to Portsmouth, where he was offered work as a stonecutter, but he failed to settle with just three goals as his team finished bottom of the Southern League. He returned to Scotland with Motherwell, ironically signed by their new manager John Hunter, who had taken Hall’s place in Dundee’s cup final team, but failed to find the net even once.

While playing success eluded him, Hall hit the headlines for a different reason in the summer of 1912 while visiting his mother in Peterhead. Hearing shouts that a boy was drowning, he ran down the harbour embankment, shed his clothes, and swam out against a strong current to save 5-year-old Alick McKenzie. Both the Carnegie Hero Fund and the Royal Humane Society recognised his bravery with awards

Back to the football, he left Motherwell to join Dunfermline, who had just been elected to the Second Division and needed experience up front. Hall rewarded their confidence with a Fife Cup victory in his first match and scored 18 league goals in his debut season. Also working as groundsman, he was into his third campaign with the Pars when war intervened and he signed up as an artillery gunner, travelling to the front to bombard the Germans. In a letter home, published in the Dunfermline Journal, he complained about squalid conditions and weak beer: “You can get a dozen into you and still belong to a temperance lodge”. It was a tough existence and within months he became so seriously ill that he was sent home, suffering from rheumatic fever.

The First World War inadvertently revealed that his family life was quite a tangle: years earlier, Hall had taken up with an unmarried mother, Elizabeth Gibson, and they had three sons but each time lied on the birth certificates that they were married; in fact they only tied the knot late in 1915, perhaps with the realisation that there would be dire financial consequences for her in the event of his death.

As it happened, he survived unscathed and after demob in 1919 was still fit enough to embark on a football swansong at home in Peterhead, coaching and playing well into his forties. However, while he won another winner’s medal in the Aberdeenshire Charity Cup after a two legged win over Buckie Thistle in 1921, his career ended in farce in 1923 when most of his team refused to play Aberdeen in a Scottish Cup tie. They were upset at the club’s decision to sell ground rights, and Hall led out a hastily-assembled makeshift eleven who suffered a record-breaking 13-0 thrashing at Pittodrie. It may have been a factor in his decision that summer to emigrate to Toronto with his family, this time for good.

As Sandy Hall faded into distant memory, his death in Canada in 1943 went almost unnoticed in Scotland, even in his native Aberdeenshire. Yet the first Scots-born Olympic gold medal winner retains a unique place in Scotland’s sporting history, as well as more than playing his part in Dundee’s only Scottish Cup success and he deserves to be remembered as a local hero in the truest sense of the word.