Played for Dundee and Heart of Midlothian – Gordon Smith 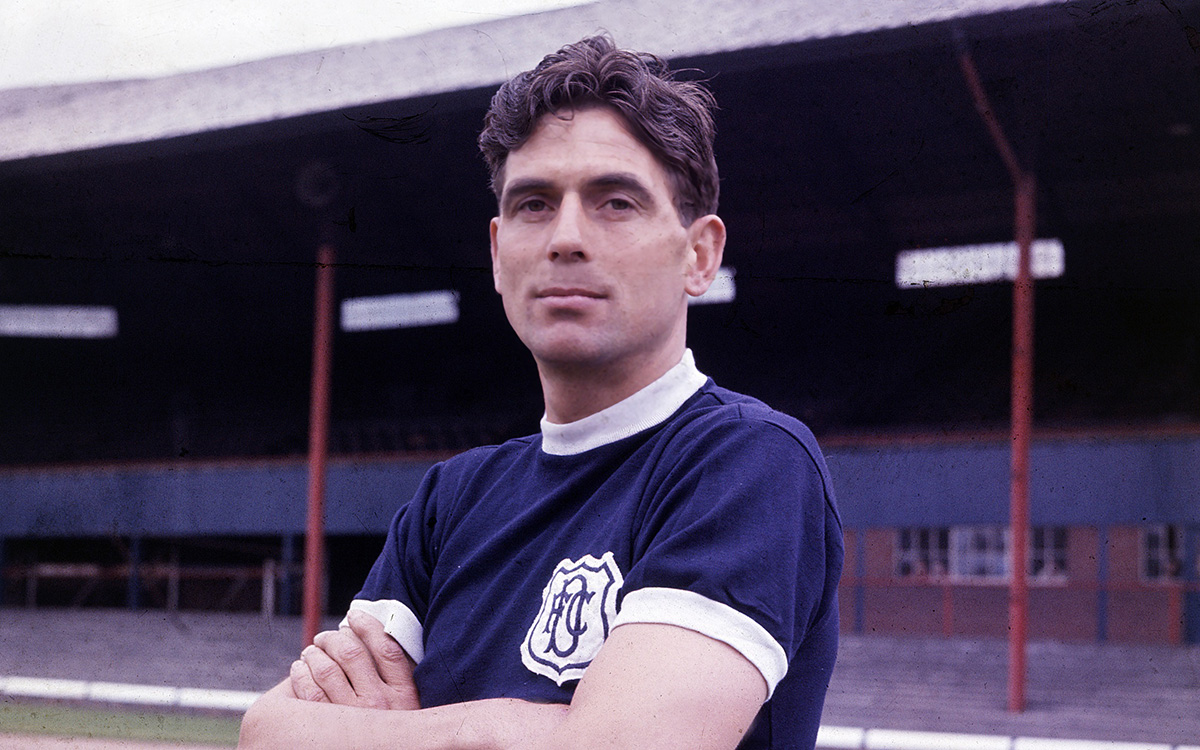 Dundee travel to Tynecastle this week to take on Heart of Midlothian and so we take a look at not just a player who played for both clubs but a player who won the Scottish League championship with both clubs, Gordon Smith.

Smith was a hugely important member of Dundee’s 1961/62 title winning squad and is regarded by many as the final piece of the successful jigsaw that manager Bob Shankly pieced together.

In trying to build a team, Shankly was concerned about the supply to his big forwards and made a third and this time successful attempt to secure the services of Gordon Smith for Dundee in the summer of 1961.

There was no arguing over the pedigree of Gordon Smith before he came to Dens as he already had three championship medals with Hibernian and one with Hearts as well as having captained his country and won the first ever Scottish Player of the Year in 1951 but at the age of 37, many fans wondered just how much mileage was left in Smith’s legs, particularly as Hearts had given him a free transfer.

Smith’s signature however proved to be a masterstroke and because of his advanced years was described by some, including former Hibs team mate Eddie Turnbull as “the Stanley Matthews of Scottish football.”

Raised in Montrose, Smith had played for Dundee Junior side Dundee North End before signing for Hibs in 1941. Smith played at Easter Road for 18 years during which time he collected three league championship winning medals as a member of Hibs ‘Famous Five’ forward line and reached the semi-final of the inaugural European Cup.

He earned a total of 32 international caps for Scotland, two of which were as a captain and his greatest moment for his country was when he led them to a 4-1 victory away to Austria in the return match to the famous ‘Battle of Vienna’ in which Billy Steel got sent off.

The press dubbed him the ‘Gay Gordon’ of the ‘Gay Cavalier’ which had a completely different meaning to today and he was described in the Dundee v Cologne European Cup match programme as “the greatest soccer pin up north of the border since the war.”

Smith was freed by Hibs in 1959 when a queue of clubs, including Dundee, chased his signature. He chose to stay in Edinburgh, spending two years with Hearts where he picked up his fourth league title in 1960.

His unique achievement of winning the league with three different clubs, none of whom were Rangers or Celtic, was described by Bob Crampsey as “the greatest individual accomplishment in the entire history of Scottish league football.”

In view of his age, Smith achievements at Dens are in themselves extraordinary. In total he played 100 times in three seasons scoring 19 times. During the championship winning season he played 37 games and bettered that a year later with 48 appearances including a European Cup semi-final appearance at the age of 39.

There have been few more graceful players in Scottish Football than Gordon Smith and it was his exemplary attention to fitness that ensured he could play at the top level for 23 years. He also paid attention to his diet, being keen to learn about the eating habits of players on the continent. For example, he introduced his team mates to pasta long before in became common place in footballers’ diets.

Having played football in Edinburgh for 20 years, Smith had a grocers business in the capital and lived in North Berwick to the south of the city. He decided to stay there and commute to Dens daily by motor car. Without the luxury of the road bridges over either the Forth or the Tay, the journey entailed a 5.30am start.

Gordon’s experience was vital throughout the championship year and he was one of the players the younger lads looked to during the two month spell in the winter of 1962 when Dundee failed to win a single game, seriously jeopardising their title hopes.

Smith scored on his league debut for Dundee in a 3-1 win at Brockville as the championship campaign opened and he quickly endeared himself to the Dark Blue faithful in his first league game at Dens by scoring Dundee’s second in a 4-1 win over Dundee United which saw him being voted as man of the match.

During the European Cup run of 1962/63, Smith’s experience would be just as vital, having played in the competition with both Edinburgh sides. In the infamous return game in Cologne in the preliminary round, Smith came in for some particularly rough treatment from the Germans and had to be helped from the field by two of his team mates at the end of the game with his legs all black and blue.

During the game itself, the Cologne supporters surrounded the touchline as it became clear that they were going to be knocked out and Gordon was even tripped up by one of their fans when he was running up the wing with the ball.

Conversely in the next round against Sporting Club de Portugal, Smith’s performance was singled out by the Sporting manager Armando Ferreira despite Alan Gilzean notching a hat-trick in a 4-1, 2nd leg win.

Smith’s last game for Dundee came on January 1st 1964 at home to Aberdeen and at the age of 39 years and nine months, remained the oldest player to have played for Dundee until goalkeeper Bobby Geddes came off the bench in April 2010, ten years his senior.

Smith’s precision play was perfect in aiding the development of young forwards Alan Cousin and Alan Gilzean and Gilzean’s prowess in the air was the perfect foil for Smith’s superb crossing ability.

Gordon Smith was the perfect gentleman both on and off the pitch and he helped raise the profile of Dundee FC as the top journalists started travelling to Dens just to see Smith before even their league winning credentials were rubber stamped.

Gordon Smith is a Dark Blue legend and in 2012 was inducted in the Dundee Hall of Fame with a Legends Award on the 50th anniversary of that title winning success. It was accepted on his behalf by his son Tony, who wrote his biography the previous year with Gordon having passed away in 2004, aged 80.

The ‘Gay Gordon’ was a hero to all who watched him in green, maroon or dark blue and there are many that feel the League Flag would not have to Dens Park without him.