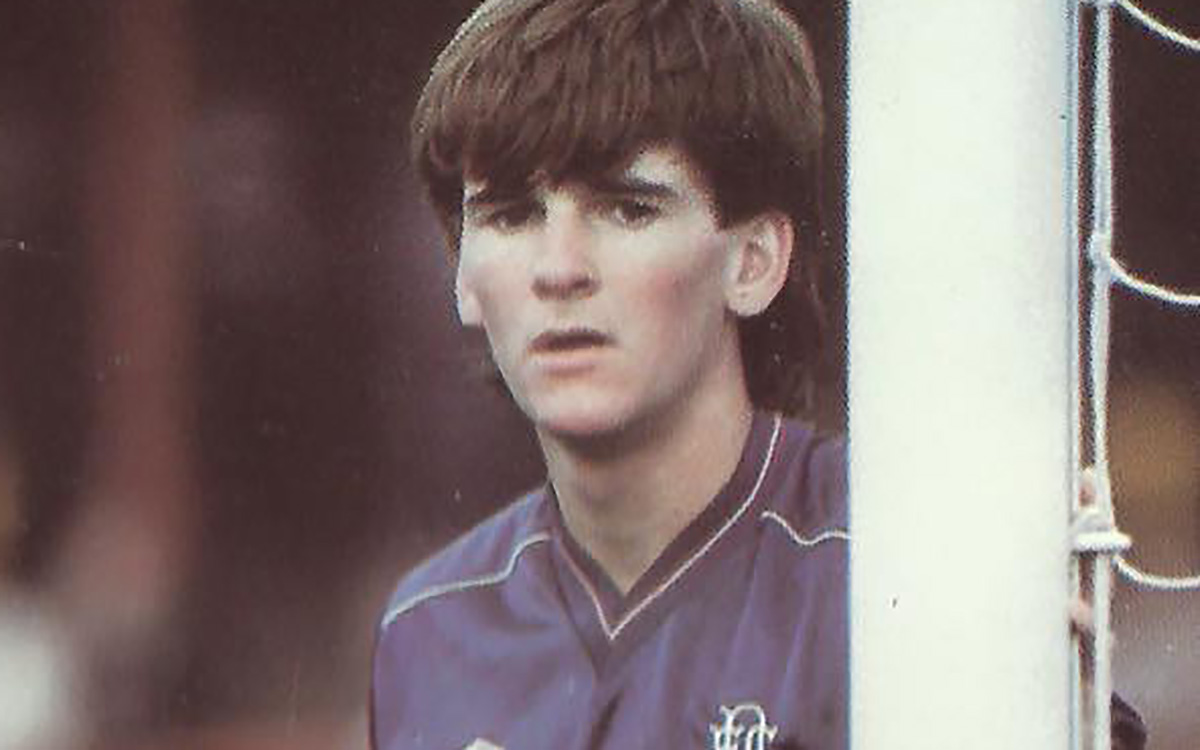 Dundee host Celtic this weekend and so we take a look at a player who played for both clubs, Tosh McKinlay. Tosh was a wonderfully, classy left-back with attacking flair who served Dundee with distinction in his 204 appearances and who won the SPL and Scottish Cup with Celtic and went to both Euro 96 and France 98 as a Celtic player

Tosh McKinlay was a popular full back with Dundee who is probably best remembered for his stunning goal in a famous derby win over Dundee United at Tannadice in 1984.

Thomas Valley McKinlay was born in Glasgow on December 3rd 1964 and as a left-winger with a deadly shot, he represented Scotland at schoolboy level. In 1981 Tosh joined Dundee from Celtic Boys’ Club and turning professional with The Dark Blues saw him change his position to left-back when he spent seven years playing for The Dee.

Tosh broke into the first team as a teenager and made his debut in the penultimate game of the 1982/83 season in a 2-1 to St Mirren in Paisley. He started the first match of the following season against Aberdeen at Pittodrie and quickly became a mainstay in the side making 46 appearances by the end of the term.

Tosh was an attacking full back who loved to go forward and his apprenticeship as a winger served him well as he was able to fire in telling crosses into the opponents’ box at regular intervals.

He chipped in with the odd goal and netted his first strike for the club at Tynecastle in a 3-1 win over Hearts in October.

Towards the end of Tosh’s first full season with Dundee, Tynecastle was also the venue for a Scottish Cup semi-final against cup holders Aberdeen but despite having the ball in the net three times, referee Brian McGinlay chopped them all off and The Dons progressed to the final where they retained the trophy with a 2-1 win over Celtic.

Tosh played in three semi-finals during his time at Dens and his second one also came in the Scottish Cup at Tynecastle when in April 1987, The Dee lost 3-2 to Dundee United in an exciting match. Just over four months later Dundee again reached the last four of a cup competition when they faced Aberdeen in the Skol League Cup semi-final at Tannadice but like three years earlier in Edinburgh, The Dons went through to the final with a 2-0 win.

Tannadice however was to be the scene of one of Tosh’s finest moments in a dark blue shirt when he scored a fabulous goal in a 4-3 victory over Dundee United in September 1984.

Dundee had failed to win any of their opening four matches of the season and had been knocked out the League Cup by Hearts the previous Wednesday but suddenly Archie Knox’s clutch of summer signings all came good at the right time and secured a victory over their local rivals.

Of Dundee’s four goalscorers, three, namely Derek McWilliams, Colin Harris and John Brown had all recently been brought to the club by Knox but it was 19 year old McKinlay who scored the best goal of this and almost any other derby.

Having gone in level at half-time, Dundee came out quickly in the second half and took a 2-1 lead when Tosh scored his wonder goal. Just inside the United half John McCormack played a long ball forward into The Arab’s box and when picked up on the left by Robert Connor, he fired a low cross into the six yard area which Paul Hegarty could only half clear. The ball bounced about 20 yards outside the box and when Tosh McKinlay came rushing in, he controlled the high, bouncing, spinning ball on his chest before sending a sweet, powerful volley high over Billy Thomson and into the top right hand corner of United’s net.

“McKinlay – there’s a great goal”, exclaimed BBC commentator Archie Macpherson on Sportscene at night. “That’s one of the best goals I’ve ever seen in this local derby.”

It was Tosh’s second victory over United having been part of the side to record their first win over The Arabs in four years the previous November and he would go on to have an excellent record against United in the next few years. In total he was undefeated in 13 derbies with six wins and seven draws but his special goal in that 4-3 victory was his only goal against The Terrors.

Tosh would win six Scotland Under-21 caps while at Dens. He was given the first of those by Andy Roxburgh against East Germany in 1983 and got the last of those against Iceland in 1985.

That same month Dundee had missed out on European qualification by just one point despite defeating Dundee United 1-0 on the last day of the season. The following year it was the same again for Tosh and Dundee when a 2-0 win over Hearts denied the Edinburgh side the League title but saw Dundee finish sixth, a point behind both St Mirren and Rangers.

In 1988 Tosh was part of the Dundee side which won the Tennents’ Sixes, the indoor football tournament contested annually by the Scottish Premier Division clubs, having just come back from a ten week lay off with damaged ankle ligaments.

In the summer Dave Smith replaced Jocky Scott in the Dens Park hot seat but within a few months of his reign Tosh was one of a number of players who handed in a transfer request along with Graham Harvey, Alan Lawrence, Stuart Rafferty and Vince Mennie. Two bids from Hearts had already been turned down for the 5ft 9in left back and when his agent Bill McMurdo intimated Tosh’s intention to move when his contract expired the following June, the board felt it was in their best interests to sell.

Tosh therefore was on his way to Hearts for a £300,000 fee and after six years and over 200 appearances in the capital, he moved to boyhood heroes Celtic. At Parkhead Tosh won his first major honours with Scottish Cup and League Championship winners’ medals and he represented Scotland at both Euro ’96 and World Cup ’98 while collecting 22 caps.

At Dens the classy left-back with the attacking flair served Dundee with distinction and at the 2015 Hall of Fame event he was welcomed back to the club as the guest speaker and entertained the crowd with his numerous tales. Tosh has been nominated himself for the Hall of Fame on three occasions but needless to say at the end of the dinner two years ago, there were plenty of Dees looking to get Tosh’s autograph and looking to ask him about his famous goal at Tannadice for which we are all forever grateful! 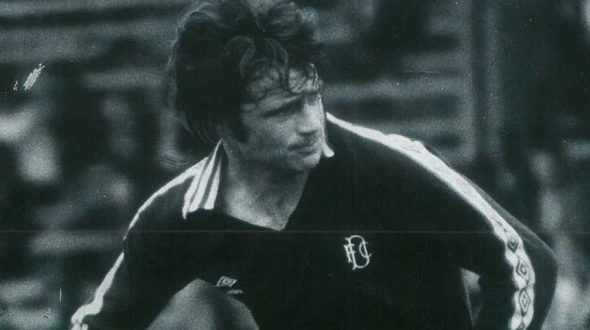 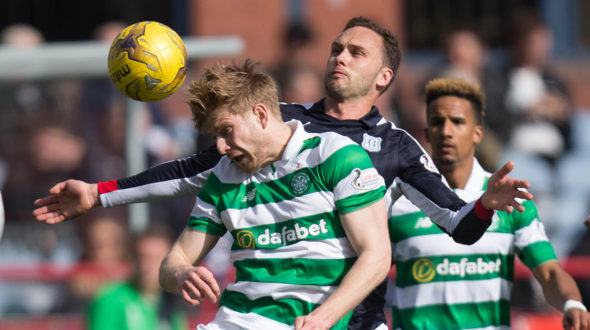 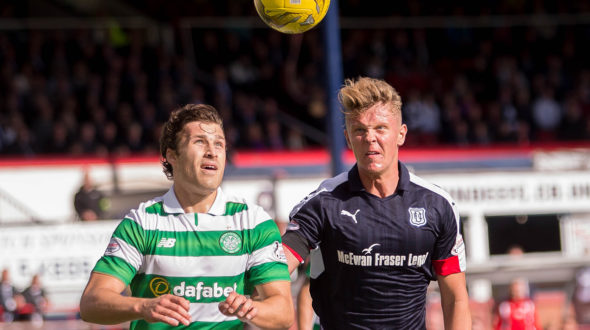