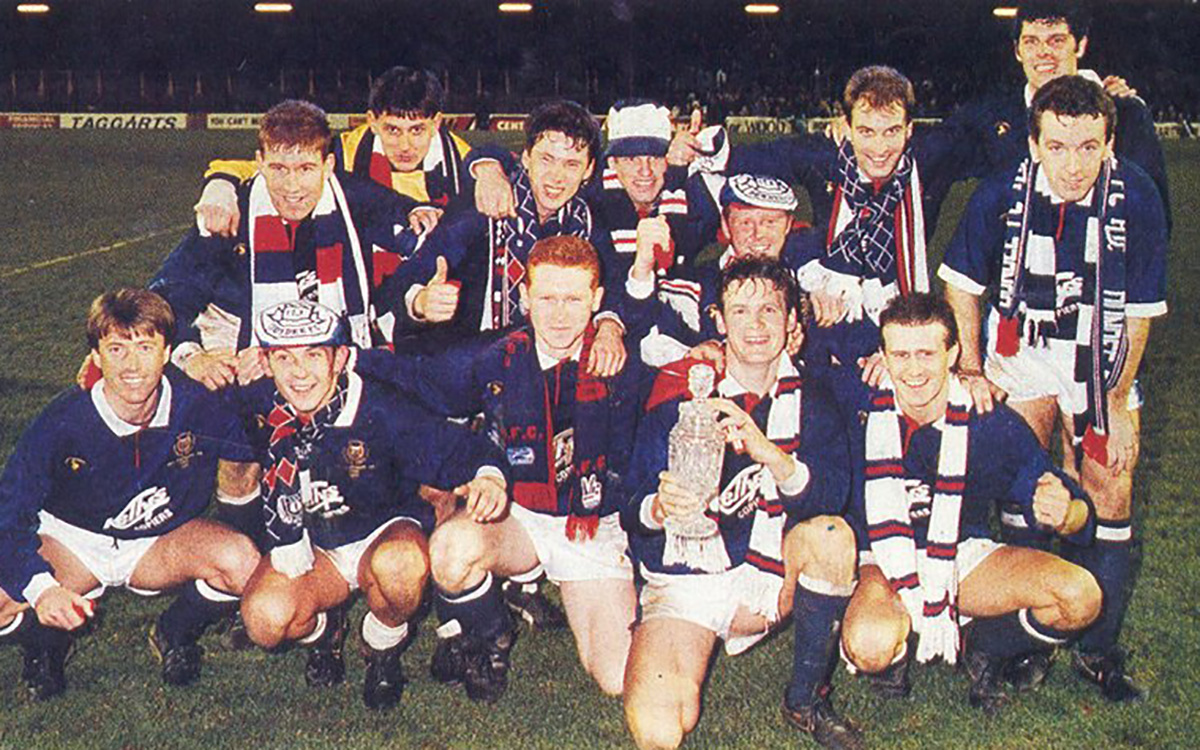 When the Scottish League announced in 1989 that as part of their centenary celebrations the following year they were going to introduce a new cup competition for clubs outside the Premier Division, few Dundee fans would have batted an eyelid. By the time the competition started in August 1990 however, Dundee fans had to take an interest as they were now an entrant into the new cup following relegation from the top tier.

Known as the B&Q Centenary Cup, this competition was meant to be a one off, knock-out tournament and Dundee, as the side that had just come down from the Premier League, were installed as favourites when the first round draw was made.

The draw however was kind to Dundee as they were given a bye and so Dundee’s debut in the Centenary Cup had to wait until the second round when they were drawn to play Alloa Athletic away from home.

The team that Dundee manager Gordon Wallace sent out against The Wasps was a full strength side with just two changes from the line-up which had drawn 1-1 with Raith Rovers the previous Saturday.

A crowd of just 915 turned up at Recreation Park to watch an eight goal thriller in which Dundee went through five goals to three. Two goals from Billy Dodds and goals from Steve Campbell, Keith Wright and Rab Shannon were enough to dispense with the Second Division side and after a poor start to the league campaign, the win was a welcome boost to the Dark Blues.

The quarter-final draw gave Dundee a tough tie as it sent the Dark Blues back to Kirkcaldy just a few weeks after that league draw. This time an excellent crowd of 4061 turned up for the midweek clash – almost a thousand more than had turned up on a Saturday for the league clash – and they were treated to a nail biting cup tie that despite no goals after ninety minutes was a cracking cup tie.

The extra time was no less exciting and it was Dundee who sneaked it 1-0 when Billy Dodds fired in a shot from the edge of the box which clipped off a Rovers defender and flew high into the net.

Cup fever had been building slowly as the competition progressed as crowds were above what was expected and rising at each subsequent round.

The semi-finals were no exception and after handing The Dee a bye in the first round, the draw was less kind as in every other round as they were handed away ties with the semis sending Dundee to Kilmarnock.

Just under 8000 turned up at Rugby Park in the first semi-final between the sides since Dundee met Killie on the way to winning the League Cup in 1973. The result that year was a 1-0 victory thanks to a goal from Tommy Gemmell and the outcome was the same seventeen years later with Dundee booking their final spot with a 2-0 win. This time it was Keith Wright who was the hero with both of the goals at Rugby Park to set up a Centenary Cup Final tie against Ayr United which was to take place at Fir Park on Remembrance Day.

On November 11th 1990 Dundee carried a large support amongst the 11,506 crowd in Motherwell but they were silenced when Ian McAllister put Ayr ahead in thirteen minutes.

Gradually Dundee took control with Colin West, who had been recalled to the starting line up after a month in the reserves, causing havoc on the right and were awarded a penalty when the flying winger was downed soon after the break.

Billy Dodds, who had missed a penalty against Meadowbank the previous week, sent David Purdie the wrong way and twenty minutes later the flaxen haired striker put Dundee ahead with a header from an inch perfect cross by West.

Dundee continued to press but against the run of play, a long range shot by David Smith was deflected high past Tom Carson in the Dundee goal to put the Honest Men back on level terms. There was no further scoring so the game went to extra time and as Dundee continued to push forward, they looked the most likely to avoid making the game go to penalties.

With only five minutes left Purdie made a brave save at the feet of Keith Wright and when the ball spun free, Dodds was on hand to complete his hat-trick from the edge of the box and win the Centenary Cup for The Dee.

Despite widespread disquiet at the record of chairman Angus Cook – a number of banners calling for his removal were taken down by the police – the fans had given the team tremendous support and as the players paraded the glass trophy (which resides in the Dens Park boardroom today) on a lap of honour, there were joyous celebrations on the terraces.

It had been an enjoyable occasion for all in Dark Blue and in addition to the £10,000 prize money, the result proved a tremendous boost to morale.

The competition was deemed a success by the Scottish League and the decided to make it an annual tournament and with the DIY superstore agreeing to continue its sponsorship, the competition would now be known for the next few years as the B&Q Challenge Cup – or the B&Q Cup for short.