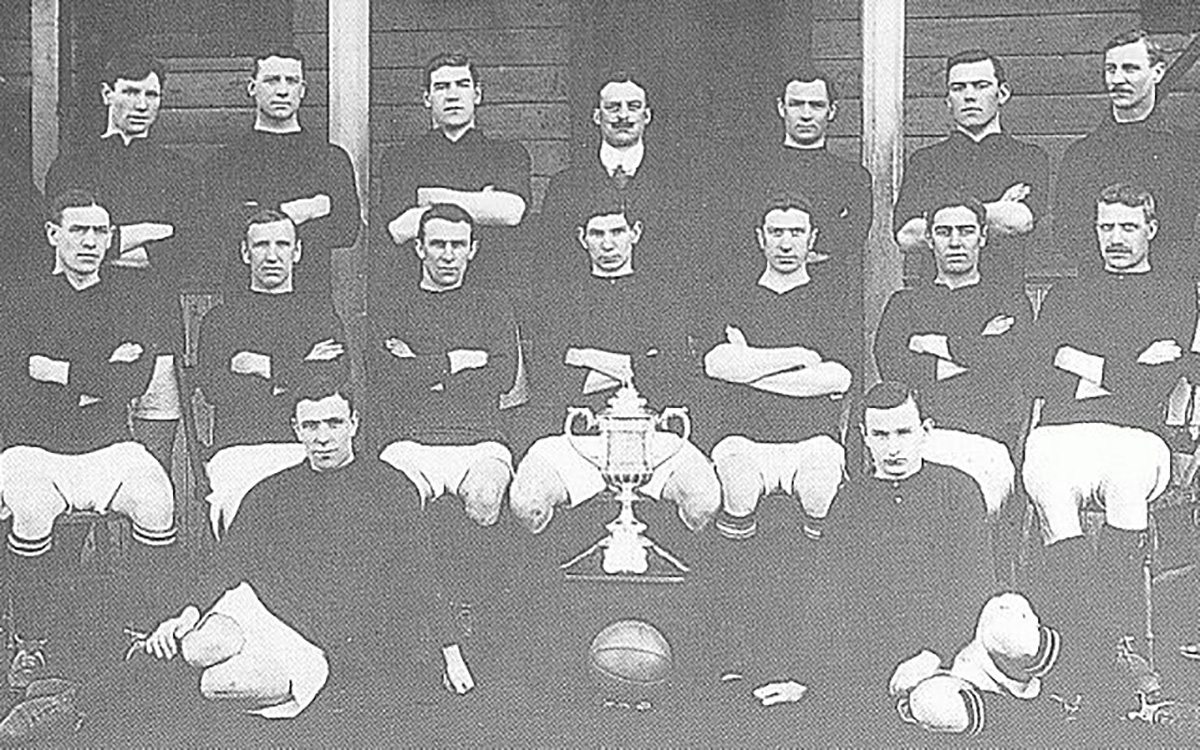 Throughout its long and proud history, Dundee Football Club has won the Scottish Cup on just one solitary occasion. The 1910 Scottish Cup Final therefore has lived long in Dark Blue folklore and at the time it was the first major trophy the club had ever won.

Dundee’s only Scottish Cup success was a monumental effort as it took an incredible ten games to lift the trophy. To put this into a modern perspective, if Dundee enter the Scottish Cup in the fourth round and go all the way, they will play no more than eight games to lift the oldest football trophy in the world.

Dundee’s ten game marathon included two replays in both the semi and the final and the ‘Road to Ibrox’ also started in the first round with a replay against non-league Beith.

Dundee’s initial form would never have suggested that they would go on and lift the national trophy. Beith were a non-League side and were largely composed of veterans, some of whom were suspected of being old enough to have gone, according to The Courier, “a voyaging with Noah in the Ark”. Dundee would take them on at Dens Park as although they were drawn away to the Ayrshire side, Beith agreed to ‘sell’ their home advantage, as was the custom in those days (and now no longer allowed).

Jimmy Bellamy contrived to make the tie more difficult when he missed a first half penalty and with Beith’s keeper Menteith in inspired form a replay was required after a 1-1 draw. The following week The Dee overcome their part-time opponents at the second attempt but not without difficulty and George Langlands goal was the difference between the sides.

The second round draw paired Dundee with Falkirk at Dens. With the struggle to overcome Beith and the fact Falkirk were maintaining a brave challenge to Celtic for the League title, many thought Dundee’s interest in the Scottish Cup was about to end. The Cup is unpredictable however and so was the 3-0 victory for Dundee with 20,000 watching Sandy Hall, Jimmy Bellamy and ‘Sailor’ Hunter netting the goals. On the same day Clyde knocked out the mighty Glasgow Rangers and the remaining clubs hopes of cup glory were increased.

Sandy Hall grabbed the headlines in the quarter finals with his hat-trick against Motherwell but it was his team mate Jimmy Bellamy who was behind the goals. The 15,000 record crowd at Fir Park witnessed a magnificent ninety minutes of wing play from Bellamy that would help put Dundee into the semi-finals alongside Celtic, Clyde and Hibernian.

In the early Twentieth century there was no neutral venue for the semi-final fixtures. Hibernian hosted Dundee on 12th March at Easter Road but with both teams showing caution a goalless draw gave Dundee the advantage of a replay at Dens. However, the Dark Blues could not make the most of the backing of their highest gate (23,000) of the season with both teams once again failing to score. The second replay was played at Celtic Park and with Dundee’s tactics of creating play through Jimmy Bellamy working well, the winger created the only goal of the game for ‘Sailor’ Hunter. It would prove a taste of the glory to follow for John Hunter who was nicknamed ‘Sailor’ after his rolling gait rather than any maritime link.

The Scottish Cup Final was the most important game in the club’s history to date. The team that lined up against Clyde contained nine players who had played in the “bigger” English League so the experience of a final would not overawe them. Clyde were equally determined and in their ranks were Booth, an FA Cup winner with Manchester City and Tom McAteer who was up against his former employer’s.

Both teams were in excellent form going into the final. Dundee had lost only one game in fifteen whilst Clyde were the competition’s shock troops having accounted for Rangers, Queen’s Park and Celtic in earlier rounds and also fancied themselves to lift the Cup.

The final took place at Ibrox because Hampden had not yet recovered from the Old Firm riot in the 1909 replayed Final which also ended in a draw and the SFA decided not to hold another replay or award the trophy.

On Saturday 9th April 1910 it was Clyde who began confidently, leading the Dark Blues by two goals to nil by half time. Both goals by Chalmers and Booth had been the result of poor defending and despite both sides producing some great football, there did not look like there was going to be any change in the scoring as the minutes ticked away.

With less than four minutes remaining Clyde ribbons were tied on the trophy and the Clyde chairman started preparing his victory speech as many Dundee fans were making their way to the exit. Then in the 87th minute Dundee sent a long ball down the middle which semi-final hero Hunter chased down and as Clyde’s defender Watson attempted to clear, it bounced off the inrushing Dens centre and into the net.

Dundee were back in the match and caution was thrown to the wind and with just thirty seconds left the Dark Blues’ efforts were rewarded when a perfect Jimmy Bellamy corner was crashed into the net by George Langlands. Dundee had drawn the game in the most dramatic of circumstances.

The Dundee supporters who had stayed to watch the closing minutes were understandably ecstatic and those who were already on their way to the railway stations missed one of the greatest Scottish Cup Final finales!

Dundee skipper Bert Lee and Clyde’s McAndrew continued the contest after the final whistle to see who would keep the match ball as a souvenir. In the end they agreed to toss a coin for the lesser trophy and the Dundee man won. Buoyed by that psychological victory he was heard to say in the aftermath “I’ll eat the Tay Bridge if we don’t win the replay”.

Well if the Tay Bridge was to disappear from the Dundee skyline it would not be after the replay the following Saturday. In torrential rain over 120 minutes (extra time in cup finals had now been introduced for the first time) both sides drew a blank to take the tie to a third game.

The second replay now took place on Wednesday 20th April again at Ibrox in front of a 24,000 crowd, taking the total crowd for the three games to 104,000.

These were names that were to become legends around the city as the first men to bring the Scottish Cup back to the city.

Not for the first time in this epic set of matches Dundee had to demonstrate their persistence and they were a goal down after only three minutes as Chalmers put The Bully Wee ahead. Clyde retreated into a defensive game but Dundee equalised in the 15th minute when Bellamy headed in from a corner. Ten minutes into the second half the cup was won. Defensive hesitance by Robertson and former Dundee centre-half McAteer allowed ‘Sailor’ Hunter to break clear and from what seemed an impossible angle he blasted the ball over keeper McTurk’s shoulder into the net.

Desperately, Clyde then laid siege to the Dundee goal to no avail and when referee Dugary blew the final whistle, caps and sticks were thrown into the air by the jubilant Dundee fans.

A crowd of 20,000 awaited the Dundee team when they arrived back in the early hours of the morning and amid delirium and chaos, the Dundee party boarded horse drawn carriages in Dock Street before the horses were unyoked on Union Street as the fans took over for the journey to Dens.

Scores of fans however jumped onto the carriage before the back axle collapsed on Victoria Road and the Dundee team made the rest of the journey up the brae to Dens on foot, with a police escort, waving the Cup as they went.

In fact at the time, winning the Scottish Cup and not the League Championship was seen as the more prestigious tournament and indeed when club chairman ex-Baillie Robertson accepted the trophy he said, “It has been the height of the club’s ambition to win the Scottish Cup”.

It was a night to remember for all concerned as the celebrations went into the early hours and with 214,000 fans watching Dundee’s ten games, it was a real money-spinner for the club.

The players themselves received a healthy bonus of £40 per man partly funded by local subscriptions. Given the amount of overtime in achieving cup glory it was no more than they were entitled to but more importantly they had written themselves into the eternal folklore of this great club.